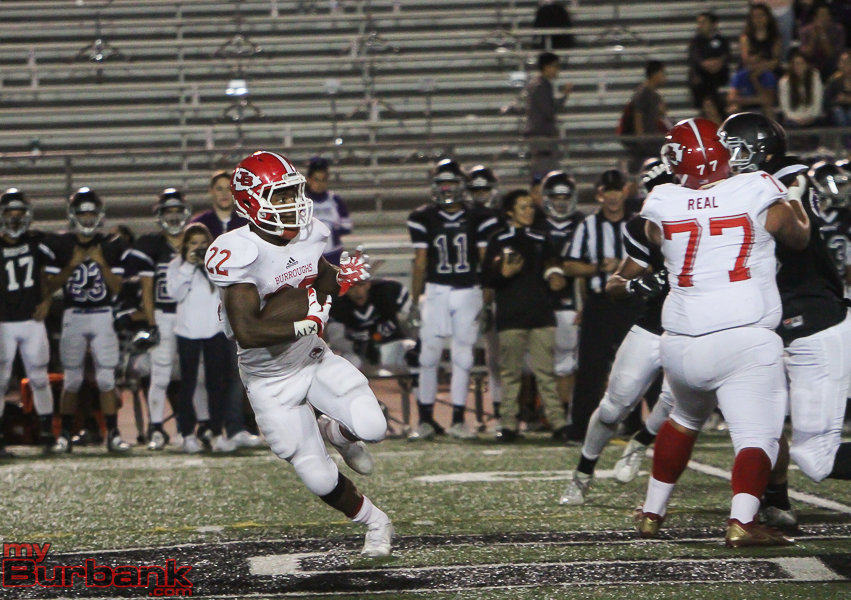 For one half, Burroughs High and Hoover played on even terms, but this all changed in the second half when the Indians scored seven touchdowns and claimed a 55-21 decision over the Tornadoes in the Pacific League opener on Thursday night at Moyse Field.

Front and center was senior tailback Chance Bell, who ran for a personal-best 333 yards on 23 carries with six touchdowns.

Bell had 247 yards on 13 rushes in the second half and added five touchdowns.

“I came out and performed,” said Bell, who has committed to San Diego State. “We had to adjust a little bit at halftime.”

Bell was coming off a 260-yard, three-fumble outing and loss against Diamond Ranch.

“That felt like a nightmare,” he said. “I knew they [Hoover] were going to try and stop me. They had a picture of me on their bulletin board. But it’s more than me. My offensive line blocks for me. My receivers block for me. It’s not just me. We’re a team.”

With this stellar performance, Bell etched his name into the Burroughs record book having the fourth most rushing yards in a single game and is tied for second in points scored with 36.

Zander Anding holds the single game mark with 393 yards against Glendale in 2011 while Dominique Barnes and Mike Barrett hold the standard with 42 points.

Barnes set his record versus Hoover in 2008 and Barrett against Valencia in 1995.

Hoover, which came in with its best start since 1958, held Bell to 86 yards on 10 carries in the opening half.

The Tornadoes (3-1 and 0-1 in league) pulled in front 7-0 on a two-yard scamper from senior running back Quinton Smith (17 carries for 69 yards) and 8:11 left in the initial period that finalized a 69-yard march.

On five straight series in the second half, Bell scored five touchdowns as the Indians (455 total net yards) took control.

Hoover scored a pair of touchdowns in the final stanza when Smith dotted the end zone from a yard out and 6:15 remaining to make it 41-14 as the Tornadoes went 80 yards.

Rangel passed for 93 yards on six of 12 with two interceptions while Burroughs senior quarterback Hayden Zepeda connected on seven of 11 for 62 yards.

Senior defensive back Preston Hernandez had two interceptions for the Indians.

Burroughs will next meet host Pasadena on Friday with a 7 p.m. start.