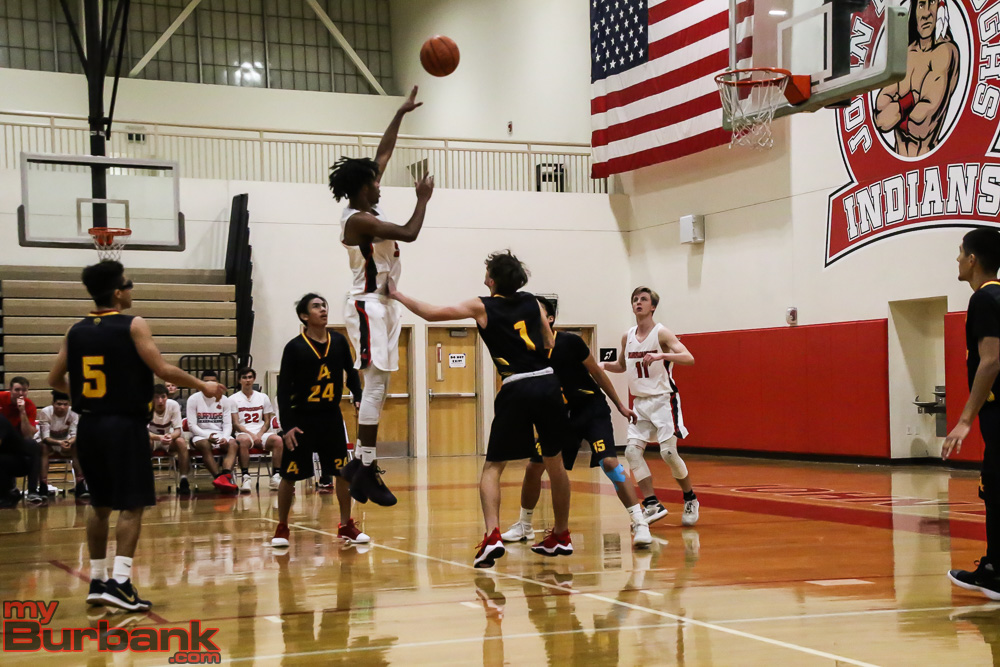 Eight turnovers in the fourth quarter, including a back-breaker in the waning moments with the deficit only a hoop, helped trip up the Burroughs High boys’ basketball team 65-62 to visiting Arcadia in the Pacific League opener on Wednesday night.

A three-pointer from Burroughs senior point guard Omar Searcy (18 points) and 59 seconds on the clock, saw the Indians draw within 63-62.

Burroughs was outscored 20-9 in the fourth quarter after making four of eight while the Apaches (4-2 and 1-0 in league) converted seven of 12 and five of nine from the free-throw line.

The Indians, who made seven of nine from the charity stripe overall and had 16 turnovers, hit 52 percent of their shots (25 of 48) and were in front 36-28 at halftime.

“We have guys that are still learning how to close games and their experience in things like that and that has something to do with that,” said Ellis of the poor play late. “They’ll learn and this is a process that we’ll get through and get better at it.”

Pacing the Indians was senior shooting guard Stefon Foster, who dropped in a game-high 25 points, including 14 points in the second quarter.

Arcadia (51.1 percent on 23 of 45) came out and made four of eight field goals in the first quarter and five of six free throws for a 16-12 advantage with senior shooting guard Jason Cardenas tallying 11 of his co-team-best 22 points.

Burroughs senior wing Carson Clarke dropped in four of his six points in the opening frame.

The Indians drilled nine of 15 shot attempts in the second period with Foster nailing five buckets that included two treys.

Senior point guard Jared San Jose scored all of his five points in the second period for the Apaches, who hammered in five of 12 from the floor, 14 of 20 free throws on the night and committed 12 turnovers.

Each team scored 17 points in the third period with Foster accounting for nine points and Searcy nailing a pair of three-pointers.

Yoon (22 points with nine rebounds, four steals and two assists) dropped in 11 points and Cardenas, who banged home eight of 13 shots and handed out four assists, added six points via a pair of three-pointers in the third period.