It turned out to be nothing more than a mere light workout for the Burroughs High boys’ basketball team which toyed with over-matched Garfield in Saturday night’s third-place game of the 31st Annual Bell-Jeff Holiday Classic. 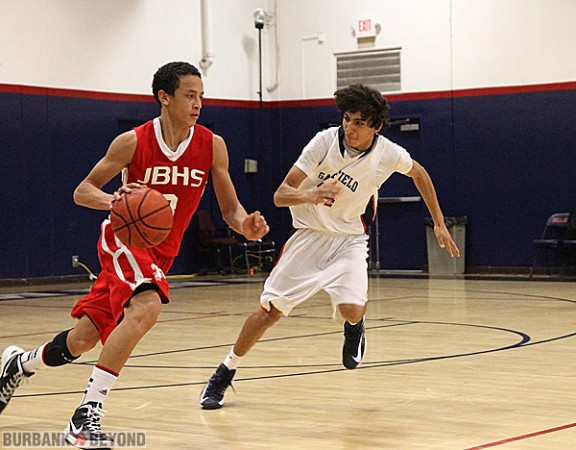 Lawrence White of the Indians dribbles up court against Garfield (Photo by Ross A. Benson)

“It was a good win because we got the whole team involved,” said White, who also pulled down seven rebounds with six blocks and five assists. “We have a solid starting five, and we have a good bench. The only thing we lack is experience.”

Burroughs led 36-6 at the intermission, and the final score was made somewhat closer after fourth-year Coach Adam Hochberg emptied his bench in the second half.

“We took off our full court press because it was the right thing to do,” Hochberg said. “With the big lead we started to lose our focus some, and we don’t want to do that. This is always a challenge.”

Hochberg talked about his two best players who are expected to lead the Indians night in and night out. 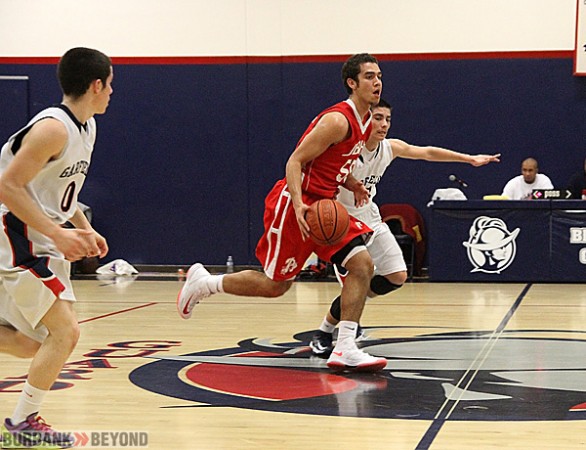 Flores-Pere, a senior power forward, tallied only six points, but had an impact on the boards and played stellar defense.

White accounted for seven points including a follow-up slam dunk that got the small crowd buzzing.

A 14-point lead swelled to 19 points when junior guard John Cutone (12 points) nailed a three-pointer with 4:55 left in the second quarter, and it became 30-6 after White, who tallied 17 first-half points, made a hoop with 2:32 left.

The Bulldogs’ shooting woes continued into the second quarter when they again only made one of 10 attempts.

Forward Willie Argueta scored all six points in the first half for Garfield (3-7), and finished with a game-high 22 points. 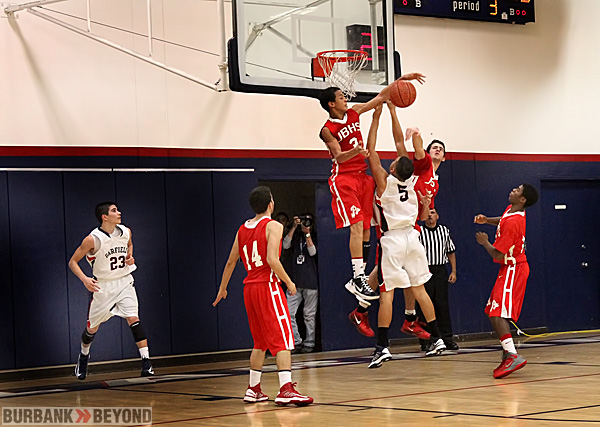 Lawrence White blocks a shot for JBHS (Photo by Ross A. Benson)

Burroughs began the third quarter by drilling four of six shots from the field including a bucket from sophomore guard Chris Hovasapian (six points) that made it 45-12 with 4:38 showing.

The Bulldogs outscored the Indians, 12-11, in the third quarter after hitting four of 12 shots, but nailing three of four from the free-throw line.

With Burroughs’ bench now in, Garfield had its most-productive quarter, tallying 19 points in the fourth with Argueta scoring 13.

In earlier games of the Bell-Jeff tourney, the Indians fell to Renaissance Academy, 56-46, on Friday, but White, Hovasapian and Flores-Pere didn’t participate because they were suspended after being involved in a so-called “fight” in the contest against Roybal.

Burroughs had its way with Roybal on Thursday taking a 68-53 decision with Verhoeven scoring 20 points and Flores-Pere adding 17.

White’s 17 points and Dries’ 10 points powered the Indians to a 69-40 triumph over Hollywood on Tuesday.

The Indians, fresh off a third place showing at Bell-Jeff and a tournament title at Maranatha, will play in the Chaminade Christmas Classic, Dec. 26 – 29. JBHS opens on Wednesday with a game against Westlake at 3 p.m.