Some games are truly memorable because of the outcome and how it was played, while in other cases a team might want to forget it.

For the Burroughs High boys’ basketball squad, Friday night’s Pacific League matchup with Crescenta Valley at Providence High, could be categorized in the latter after falling behind early and never catching up in an eventual 67-40 setback. 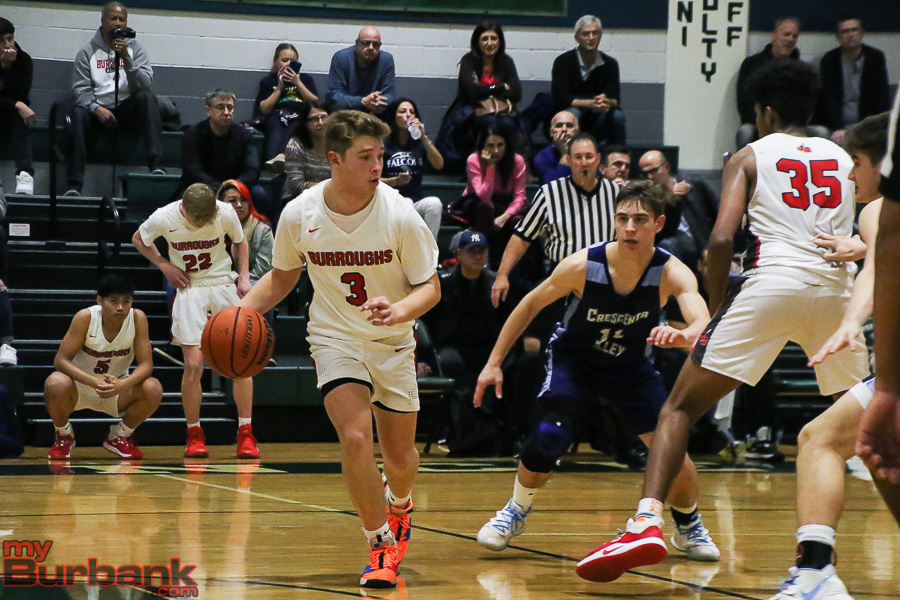 Nicholas Garcia dribbling the ball against Crescenta Valley. (Photo by Ross A. Benson)

The Indians were held to six points in the first and second quarters and trailed 38-12 at the intermission after making just four of 24 for 16.6 percent from the floor.

The second half was much better for Burroughs, which outscored the Falcons 18-15 in the third quarter to get within 56-27, and then outscored Crescenta Valley 13-11 in the fourth quarter.

The Falcons, who pulled ahead 18-6 heading into the second period, had two players score in doubles figures as shooting guard Tyler Carlson tallied a game-best 24 points and power forward Alec Vosjanian scored 16 points.

The Falcons (14-3 and 5-1 in league) started strong as they connected on six of 11 from the floor and continued their hot shooting after drilling eight of 13 in the second period.

Carlson scored 10 points in the initial frame and that included two of his four game-high, three-pointers. 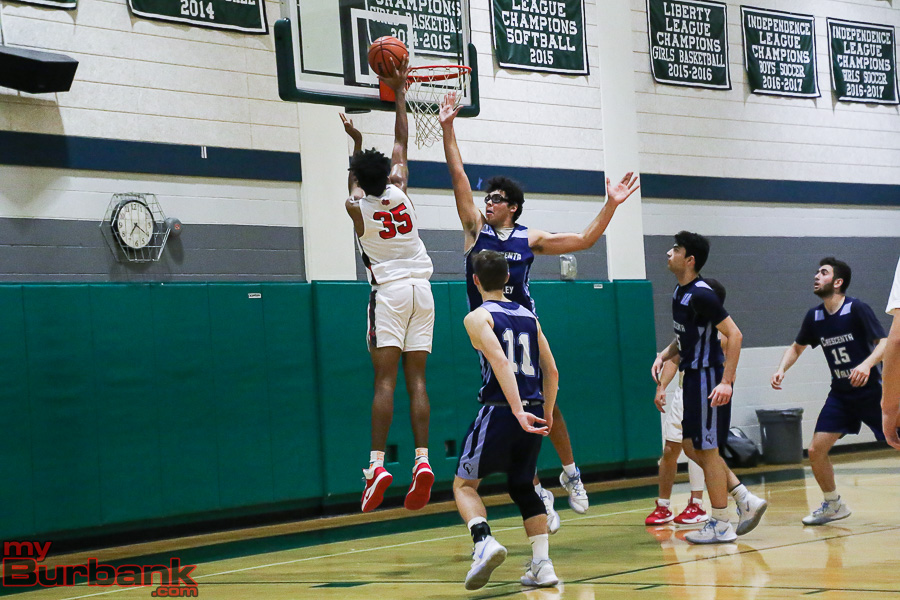 Center Corwin Smith scored a team-high 10 points for the Indians. (Photo by Ross A. Benson)

Vosjanian tacked on 12 points in the second period and that included his only three-pointer.

On the opposite bench, the Indians (13-6 and 4-4 in league) hit two of 12 from the floor in the first and second quarters.

Nicholas Garcia is the point guard and the starting quarterback for the Indians this past season.

“Twelve points in a half is not going to cut it,” said Garcia, a senior. “We just gotta go back to work tomorrow. We just gotta keep playing through this. You’ve gotta have a better offense.”

Garcia thinks Burroughs will bounce back. “I say out of these next four games, we go 3-1,” he said. “This is our only loss.” 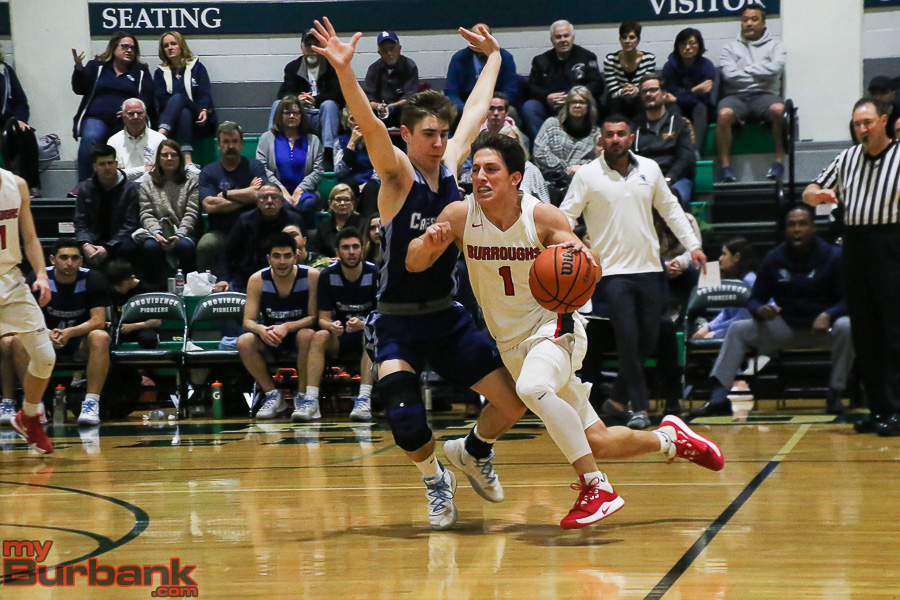 After Smith made two free throws in the first quarter, he scored a hoop and two from the charity line for six points.

Carlson was on the mark in the third quarter after tallying 10 points with six points coming on a pair of three-pointers as the Falcons were successful on seven of 18 from the field.

Burroughs senior shooting guard Carson Cardenaz, who played wide receiver on the football team, nailed a pair of three-pointers in the third quarter for his only points.

Guard Blake Ballard had a good third quarter for the Indians after scoring five of his seven points.

Senior forward Emery Goulet was also productive in the third period for the Indians, scoring four of his six points.

Crescenta Valley finally had an off-shooting quarter in the fourth after making four of 15.

Guard Elijah Duller delivered all of his seven points in the fourth quarter for the Indians, who made 11 of 26 in the second half (37.9 percent).

Guard Jase Sadsad came of the bench and scored two points for Burroughs, which made three from three-point range  and nailed seven of eight from the free-throw line for 87.5 percent.

The Falcons dropped in seven three-pointers and drilled 10 of 12 from the free-throw stripe for 83.3 percent.