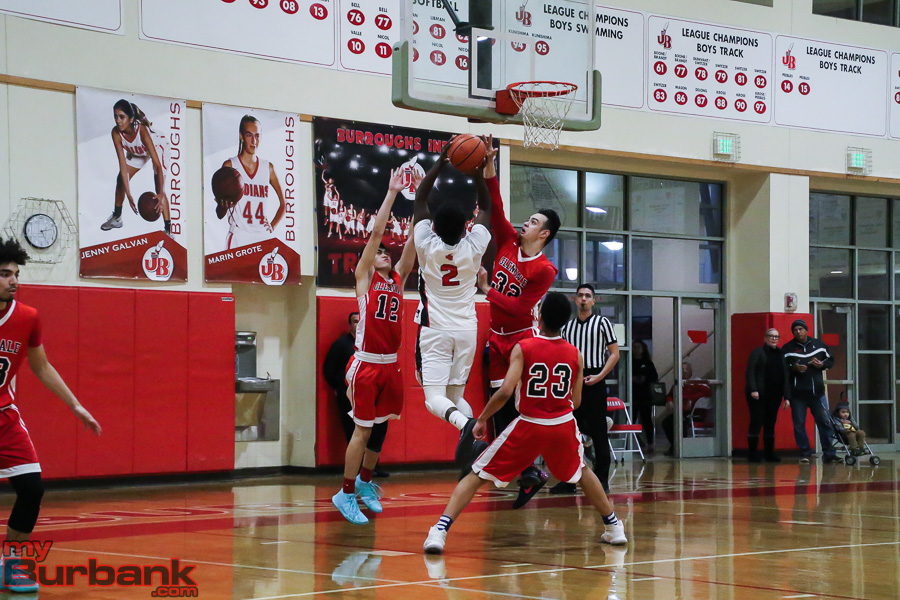 An even dozen three-pointers found the bottom of the basket for the Burroughs High boys’ basketball team on Wednesday against visiting Glendale.

The result was an impressive 81-70 Pacific League victory as three players reached double-digits, including junior forward Zion Bazzell, who tossed in a team-high 21 points.

Bazzell had a pair of treys in the first quarter as the Indians converted 10 of 13 from the field, seven from beyond the three-point stripe and led 27-15.

“We knew they could shoot the basketball,” Burroughs coach Allan Ellis said. “I watched a couple of films of them and they were knock-down shooters, so we wanted to make sure we were guarding the perimeter, run them off the three-point line and in that process we gave up a lot of layups in the first half, but were able to clean it up in the second half and we were able to do a better job defensively.”

When Bazzell scored with two minutes showing in the initial frame the Indians pulled ahead 21-11.

High-man for the Nitros (13-4 and 1-3 in league) was senior shooting guard Eli Degrate with 28 points, who tallied 16 points in the second half.

The Indians were marksmen for most of the evening, drilling 29 of 54 for 53.7 percent.

“This is the defense that we were playing earlier in the season and we have gotta get back to that and we’ve done that in the last two games,” Ellis said. “In my opinion, defense wins basketball games. If we’re engaged on that end of the floor and we’re defending and rebounding, then we can push the ball and get easy points in transition.”

The Nitros outscored the Indians 16-10 in the second period and made six of 14 from the field and four of six from the charity line as Degrate had six points after scoring six in the opening period.

Meanwhile the Indians, who led 37-31 at halftime, made four of 14 from the floor as Bazzell accounted for four points after dropping in 10 in the first quarter.

Three shots later, senior wing Amir Montgomery (seven points) added his only trey that made it 44-35 with 5:20 left in the third quarter.

When Bazzell scored on a driving layup after a steal with 4:06 remaining, the Indians forged a 46-36 lead.

A bucket by senior shooting guard Omar Searcy (12 points) gave the Indians a 53-41 cushion with 1:10 left before heading into the fourth quarter.

Burroughs added six more points in the frame and led 59-41 going into the fourth quarter.

For the second straight quarter, Burroughs scored 22 points after hitting seven of 11 from the field and nine of 12 free throws, but was outscored by Glendale, which had 29 points including 15 points from Shamiryan and Degrate’s 12.

The Nitros hit eight of 19 in the fourth period as Shamiryan added three from three-point range.

Senior shooting guard Stefon Foster chimed in with 11 points for Burroughs that included three treys and sophomore point guard Quentin Roberts added all nine points in the second half, including a three-pointer in the third quarter.

Considering the up-tempo pace, the high-scoring game was relatively well-played with Burroughs turning the ball over 12 times to Glendale’s 10.