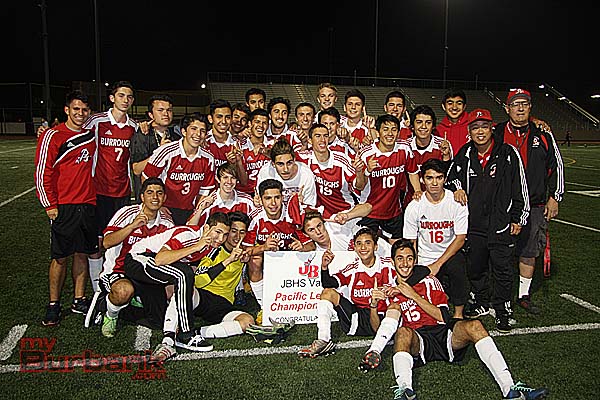 Rack up another league title for Burroughs boys soccer.

Behind the mastermind coaching of Mike Kodama and a talented and close group of young men, the Indians are kings of the Pacific League for the second consecutive year. 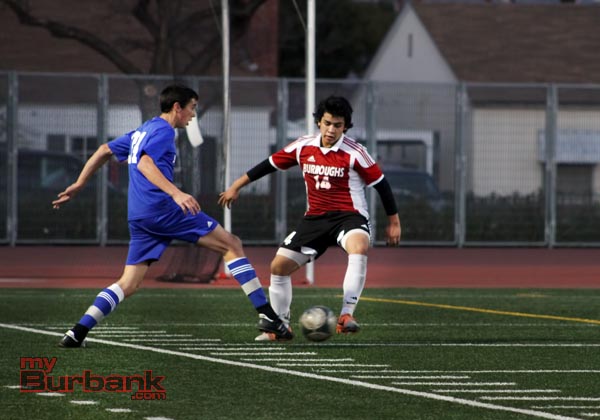 Burroughs’ Andres Aguilar fights for possession of the ball against a Burbank player (Photo by Ross A. Benson)

“We never get tired of these. To be able to do that is a wonderful experience,” Kodama said. “The guys really worked hard for this. It’s quite an accomplishment. For the seniors to win back-to-back is something they will carry for the rest of their lives. For the other guys, they got a taste of it which is great and maybe could use that towards next year.”

Milosh Petko completed a hat trick scoring three goals to lead the way. The Indians fought off a pesky young Bulldogs squad and broke through with 16 minutes remaining in the first half when Petko scored off an assist from Andres Aguilar.

Petko added his second goal when Marcos Arana gave him a nice assist with 11 minutes left and the Indians took a comfortable 2-0 lead into halftime.

Burbank countered scoring its first goal on a penalty kick by Christopher Mazzi early in the second half. Suddenly, the game was tight but that didn’t faze the Indians. 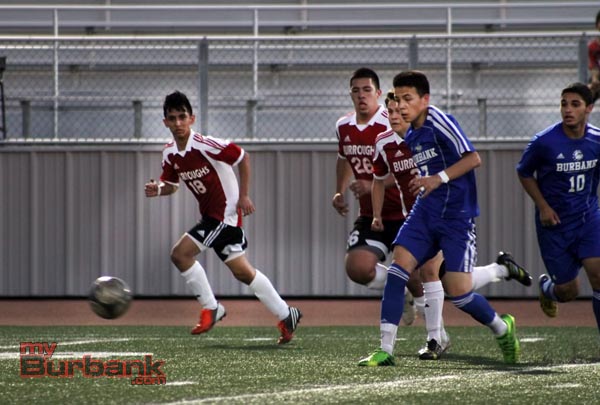 Burbank battled the entire game but the Indians proved to be too good (Photo by Ross A. Benson)

With second-place Pasadena only two points behind and having won earlier in the day, Burroughs could not afford to slip up in the second half to the undermanned Bulldogs.

Gerlach scored on a penalty kick to make it 3-1 and Petko ended any upset hopes by BHS when he scored off a Gerlach assist at the 74th minute to give the Indians a commanding 4-1 lead. Burbank added a late goal to complete the scoring.

“That was a tough game. Burbank came to play,” said Kodama. “It was quite a tough match and we had to make sure we took care of business. It wasn’t easy.”

Kodama pointed out after the game that his squad won five matches in league this year with the deciding goal occurring with less than 10 minutes to play.

The Indians, ranked No. 6 in the CIF Southern Section, have demonstrated resiliency and plenty of composure winning the close games.

“It feels good. Last year we won when I was a junior but it feels even better being a senior,” Gerlach said. “You can never count out Burroughs. We fight to the end. We win with each other and we lose with each other.”

While the team celebrated the league championship with family and friends after the game, Kodama reflected on how special this team has been.

“These guys work hard and are very dedicated,” he said. “We demand a lot out of them. I’m glad they get the rewards from all their hard work. That’s why we do this. It’s very satisfying, very gratifying. They are a great group of guys. They earned this one.” 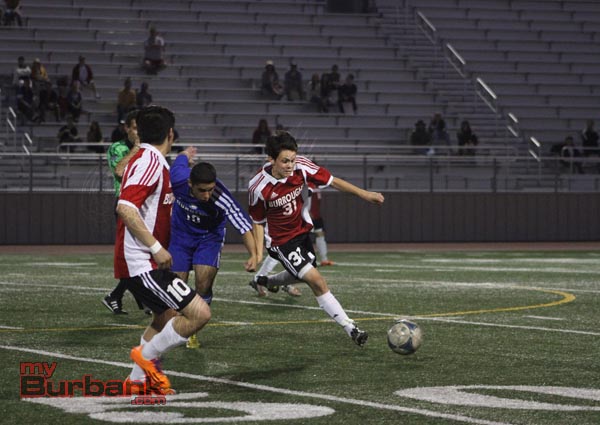 Josh Sanchez of the Indians hunts down the eluding ball (Photo by Ross A. Benson)

Burroughs now awaits its playoff seeding to begin the postseason. A year ago, the Indians reached the CIF quarterfinals only to lose to Palmdale, 4-3.

The Indians will find out Monday afternoon who their opponent will be when the brackets are released.

“I have a great team. These guys are my brothers, they are my family,” Petko said. “I wouldn’t trade these guys for anything. I love these guys so much. We deserve this title and we are going to win CIF. We are going to keep pushing through.”

Burroughs has never won a CIF title in any sport. Could this be their best chance? Stay tuned.

Burroughs Andres Aguilar fights off a Burbank player for possession of the ball (Photo by Ross A. Benson)

Burbank battled the entire game but the Indians proved to be too good (Photo by Ross A. Benson)