Thursday afternoon the Indians defeated host Burbank High 4-1 to win yet another league title. But this one had something special.

Kodama was referring to the fact that this league title is his tenth in his tenure at Burroughs and the tenth in school history.

‘La decima’ was a term that was used to refer to Real Madrid, the most successful soccer club in the world, after it won a tenth European title in 2014.

“It was a great team effort by everyone all season,” said Jake Lasso-Spell, who finished the regular season with 16 goals, including 13 in league. “We deserve this. We worked hard for it.” 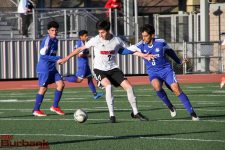 “To beat our rival on the last day and win league is special, but we’re going to get ready for the playoffs and try to win some more,” Cameron Kelly said.

Lasso-Spell got Burroughs on the board in the 21st minute. Diego Galaviz made a short-corner pass to Erik Camarillo, who found Lasso-Spell at the back post, where he was able to put a right foot on it.

Two minutes later Burroughs doubled its lead when Evan Parisi-Sanchez headed in a headed pass from Anton Prather off a throw-in from Kelly.

Burroughs took a 3-0 lead in the 61st minute when Lasso-Spell put a through ball that to Nicky Reinoso, who took a left-footed shot that found the right corner of the goal.

Kelly gave Burroughs a four-goal cushion in the 64th minute when Kelly took a long pass from Richard Alonzo and was able to get it past Burbank goalie Christian Ramos who came out to make a save.

Burbank (0-13-5, 0-11-3 in league) got on the board in the 72nd minute when Omar Ibnoujala picked up a loose ball at the edge of the goal box and took a shot that found the left corner of the net.

“It was a tough season, but there were a lot of one-goal games that it came down to,” Burbank coach Mike Alcaraz said. “The guys had a good work rate and they showed it every single game. They never backed off.”