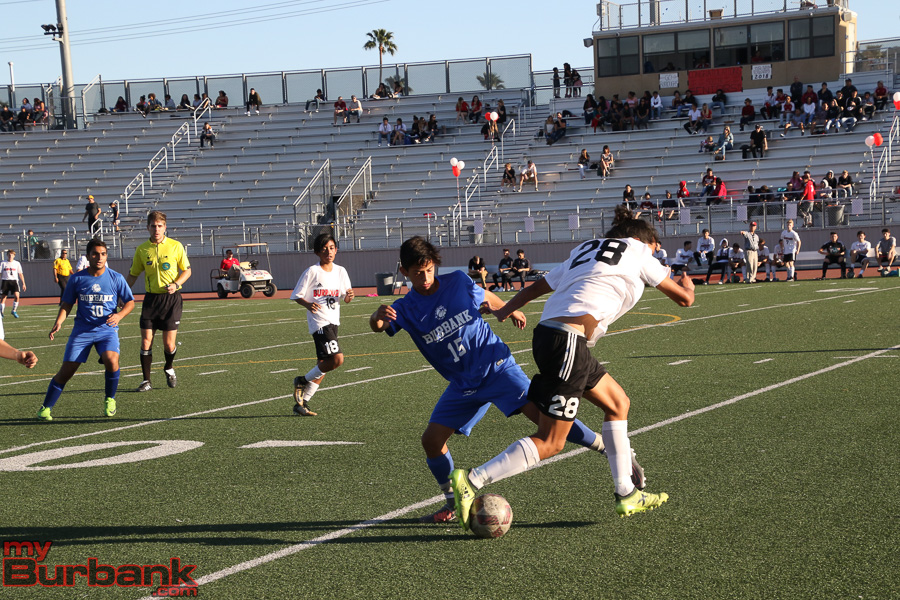 That’s because what came next was a mere avalanche of goals from the Indians, who sideswiped Burbank 5-3 in a Pacific League match at Memorial Field on Thursday afternoon.

“We just had to make sure to keep our composure and take our opportunities,” Burroughs coach Mike Kodama said. “I thought the boys did a great job of doing that.”

Kodama explained what was emphasized.

“You make one play at a time,” he said of the 2-0 deficit. “We saw a hole that we wanted to take advantage. A great space for Topli [Petko].”

Petko led the way with two second-half goals for the Indians, who went 15-8-1 overall, placed second in league with a 9-4-1 record and will compete in the upcoming CIF Southern Section playoffs.

“You know, it’s just a beautiful game, honestly,” said Petko, a senior defender. “We started slow in the first half, but that’s OK. In the locker room, we picked our heads up. Second half we said nothing, no more.”

The Bulldogs went 5-9-4 in all matches, 4-8-2 in league, didn’t qualify for the postseason and were paced by Andrew Senane with two goals.

Burbank struck first with two penalty kicks that resulted in scores against senior goalie Sebastian Kalemkerian, who was replaced by junior Edgar Rodriguez in the 68th minute.

In the 16th minute, Senane’s 10-yarder found the upper left portion of the net that made it 1-0.

In the 26th minute, Andy Cardenas’ 10-yard bullet gave the Bulldogs a 2-0 advantage.

“It’s the last game. We lost the playoffs. It’s hard to motivate players,” Burbank coach Gor Kirakosyan said. “But this time, it’s against Burroughs. It’s always as players exciting to be in this game. This game, the whole year, they never gave up.”

Kirakosyan then went on: “They’re a really good team [Burroughs]. I think the experience part hurt us at the end as a team. At the end, we tied them. When they scored the fourth one, we had to go for it.”

In the 35th minute, the Indians drew within 2-1 on a 10-yard header from freshman forward Manny Gonzalez with an assist from junior midfielder Esteban Alcantar that slipped past Artyom Ginosyan, who was in goal out of necessity and certainly despite being Burbank’s leading goal-scorer.

The Indians then knotted the match at 2-2 in the 43rd minute on Petko’s laser from 20 yards.

“As a team, these guys inspired me to score those goals. In that first goal when I scored, and when those guys have your back, there’s nothing better,” he said.

In the 57th minute, Petko then added his second tally, from 15 yards, that put the Indians ahead 3-2.

“I have beautiful midfielders who give me the ball. I can’t ask for anything else,” Petko said.

The Bulldogs leveled it at 3-3 after Senane scored from 15 yards in the 71st minute that nestled into the upper left corner.

But senior defender Victor Lopez gave the Indians a 4-3 advantage on a follow-up blast from 10 yards in the 74th minute.

The match was put out of reach when senior midfielder William Rosales booted one home in extra time.