The Burroughs High boys’ soccer team has dominated many of its opponents this season.

Saturday afternoon in the CIF Southern Section Division 3 quarterfinals, the Indians were on the opposite end, as host Salesian earned a 3-0 win.

Salesian (17-5-3) dominated play in the midfield from the beginning, but was unable to break Burroughs’ defense for a long time.

“I feel we had a lot of success controlling possession and getting some good scoring chances. I was hoping to be up 1-0 at halftime,” Salesian coach Mark Johnson said. “I thought we had a couple of good chances to score. We heard a lot about Burroughs being a second-half team, so we knew we had to come out and play the same kind of soccer in the second half. Burroughs gave us our best test yet in the playoffs. They deserve a lot of credit.” 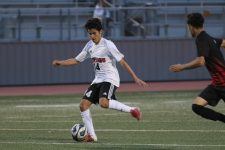 The Indians’ best chance in the first half came in the 31st minute when Erik Camarillo found Cameron Kelly at the edge of the goal box. But Kelly lost his footing in attempting to set up a shot.

Salesian broke through in the 44th minute when defender Moises Membreno surprisingly went forward along the left side and was able to cross the ball to Anthony Solares, who was able to beat Burroughs goalie Jordan Morgan at the right post.

“The goal they scored on the far side was a game breaker,” Burroughs coach Mike Kodama said. “You need one play like that to win something at this level and they got the play.”

Burroughs had a chance to even things up in the 64th minute when freshman David Gerlach put a ball through for William Rosales. Ramirez came out to make a kick save for Salesian, but failed to cleanly hit the ball. Eventually Salesian’s defense was able to put the ball out for a throw-in

The Indians also tried to sneak defender Richard Alonzo into the attack in the 67th minute, but he was called offside.

With Alonzo up, Salesian took advantage by scoring for a second time a minute later.

Solares found Alex Barrera in the box and the striker was able to put the ball past Morgan.

“We made an adjustment to try to slow them down a little bit on the attack and play a little more to counter,” Kodama said. “We gave up goals when we pushed guys forward. We took more risks and left more openings and they took advantage of it.”

Salesian scored its third and final goal in the 78th minute as Abraham Reyes fired a solid shot outside the goal box that went over Morgan’s head and would have been difficult for any goalkeeper to save.