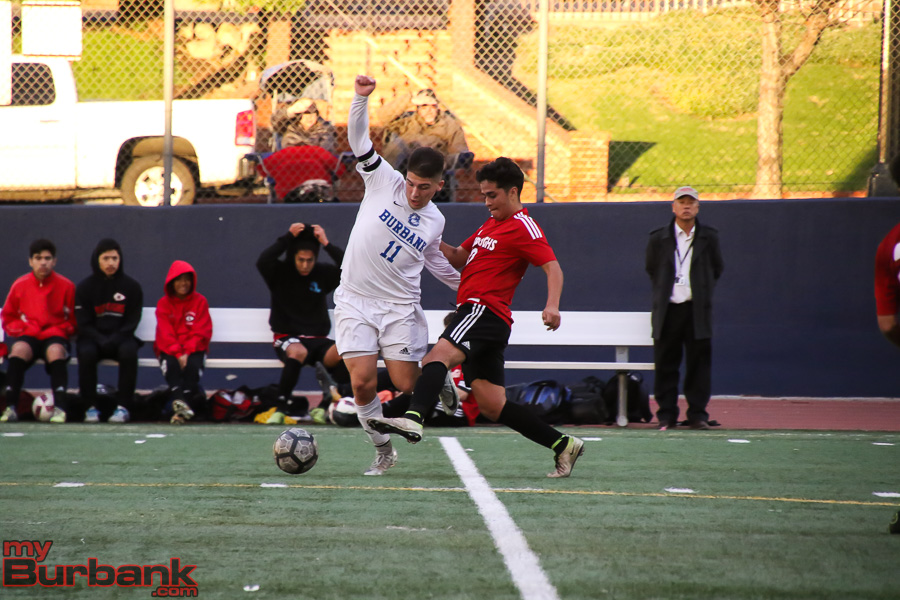 In an expected tight and at times rough-and-tumble Pacific League boys’ soccer match, one goal separated Burroughs High from Burbank on Friday afternoon.

The only tally came in the 48th minute when freshman forward Manny Gonzalez knocked in a header from 15 yards out after junior forward/midfielder Esteban Alcantar’s free kick from 35 yards.

“Rivalry game. Good support from my teammates,” said Gonzalez of the goal that made it 1-0. “We made it happen. They’re going to come. A beautiful ball from Esteban. You just have to put them in.”

Burroughs coach Michael Kodama was pleased with the outcome.

“There’s 80 minutes. You have to play each minute,” he said. “Just keep playing and look for that opportunity and when that opportunity comes, you want to finish it. Real happy with the performance of the guys today.”

The visiting Indians dominated the opening half as senior defender Jonathan Ortega had a 25-yarder sail wide left in the second minute.

The Indians (11-6-1 and 5-2-1 in league) had the next three shots including Gonzalez’s 30-yard penalty kick that sailed wide right in the fourth minute.

Sophomore midfielder Juan Carlos Rosales then chipped in with a corner kick in the 18th minute, and senior defender Topli Petko tossed in a 20-yarder in the 19th minute.

Burbank’s Artyom Ginosyan’s 15-yarder from the left side in the 21st minute was stuffed, while teammate Andy Cardenas had a free kick from 35 yards in the 26th minute.

“It came down, for me, to refereeing,” Burbank coach Gor Kirakosyan said. “They got to call it both ways. I understand, it’s a red card, yes, but why would my player hit someone for no reason?”

Kirakosyan added: “I’m proud of my players. They hustled down to the end,” he said. “They stepped up. Some of them were playing out of position. We had like five freshman.”

Cardenas had another free kick a minute later and Ginosyan followed with a header.

A corner kick from Rosales came in the 30th minute, but Cardenas delivered a free kick followed by a header from Ginosyan in the 32nd minute.

Burroughs had the final five attempts of the first half and they were a corner kick from Rosales in the 33rd minute, senior defender Jake Von’s 10-yarder four minutes later, Alcantar’s 35-yard blast in the 38th minute, Gonzalez’s 25-yarder that hit the cross bar in the 39th minute and Alcantar’s penalty kick that was redirected by Von in the waning moments.

Alcantar had a 20-yarder sail wide right in the 45th minute, and Alcantar chimed in with a 30-yard penalty shot in the 50th minute.

Ginosyan had a 15-yarder hit the football crossbar and into the top of the net in the 51st minute, while Rosales walloped a 20-yarder in the 54th minute.

Senane saw a 15-yarder sail wide left in the 60th minute, Cardenas added a penalty kick four minutes later, but Gonzalez broke the spell with a 10-yarder in the 65th minute.

Senane was tagged with a red card in the 66th minute and was removed from the game after pushing a Burroughs player from behind.

“Every game in the Pacific League is going to be physical and they have to get used to it,” Kodama said.

Alcantar had a 20-yarder in the 71st minute, another 20-yarder a minute later and Gonzalez a corner kick in the 75th minute.

Rosales mashed a 25-yard free kick in extra minutes for the match’s last shot on goal.