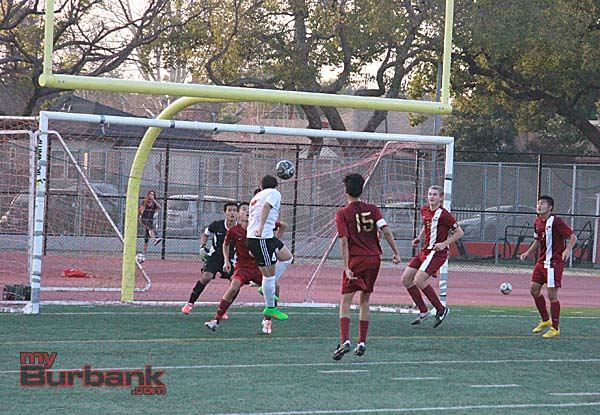 With their backs against the wall, it’s now or never for the Burroughs boys soccer team. After winning back-to-back Pacific League titles, the Indians are in a must win situation from here on out.

The regular season ends next Thursday at Burbank but in order for Burroughs to extend its season a little bit longer, the Indians need to win out. After tying Muir 1-1 on Friday afternoon, Burroughs is now 0-3-2 in its last five matches.

The tie against the Mustangs follows a difficult stretch where Burroughs played three games in four days. Though the defense played outstanding allowing only three goals total, the offense struggled to find the back of the net resulting in 1-0 losses to Arcadia and Pasadena and a 1-1 tie versus Crescenta Valley.

“The guys worked hard,” Burroughs coach Mike Kodama said after the Arcadia game. “We have guys nursing injuries and out with illnesses. But that is no excuse. We had our chances but we just didn’t finish.”

The Indians controlled the midfield for the majority of the game against Arcadia but were unable to convert several golden opportunities.

Trailing 1-0 at the intermission, Burroughs (7-8-5, 4-5-3) regrouped and played a much stronger second half behind the play of seniors VJ Salazar and David Campos.

Campos had a free kick from 30 yards out that cleared the Apaches defense but fell right into the waiting hands of the Arcadia goalie. Four minutes later, another Indians’ shot went wide left of the goal.

With 8:05 remaining in the game, Alberto Rodriguez sent a nice header off a corner kick that the Arcadia goalie promptly saved.

The Indians continued to have no luck as a well-placed ball by Diego Galaviz across the center of the field failed to reach an open teammate.

Despite the loss to the Apaches, Kodama saw performances from three underclassmen promoted from the junior varsity that showed promise for the future.

“We brought up three of our younger guys and they played well,” said Kodama. “I thought our defense was solid in back. We got great performances from Alberto, Bailey Anderson and Josh Sanchez. Jordan Morgan was solid in goal.”

Opportunities came and went for the Indians who now must defeat Hoover and Burbank this coming week to have any kind of shot at the postseason.

“As a team, we need to step up more,” Salazar said. “I think we are a good team but our chemistry has to get a little better. I can’t explain why we are not scoring enough. We need to continue putting shots on target and we will score eventually. We are trying to perform but it’s not coming through for us.”

Food Lisa Paredes - January 26, 2022 0
Toluca Lake has developed quite the collection of healthy-focused restaurants in recent years, and with the addition of Mendocino Farms in August 2021, offers...