The Burroughs High boys’ soccer team didn’t come out from the opening whistle like a race horse.

However the Indians finished Tuesday’s Pacific League contest the way they wanted to in a 4-1 win over host Glendale High.

“I think the first 10 minutes we weren’t really awake but after that we pretty much controlled the whole game,” Burroughs defender Jake Von said.

Burroughs (13-7-1, 7-3-1 in league) eventually got on the board in the 19th minute when wing back Topli Petko set up Xavier Iniguez on the Indians’ first goal. 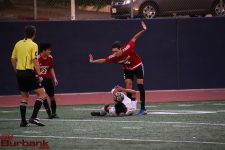 The Indians doubled their advantage in the 54th minute when set up Esteban Alacantar on a goal.

“In the second half we got our rhythm going,” Petko said. “We started firing it up and playing the ball. The last 40 minutes it was all about playing simple and finding those gaps.”

Glendale made things interesting by getting back a goal off a counter attack opportunity.

However Burroughs continued to put pressure on the Nitros. It resulted in two more goals, both scored by freshman Manny Gonzalez. He leads the team with 11 goals on the season, a school record for a freshman.

He scored in the 70th minute off a pass from Carlos Rosales to make it 3-1. Five minutes later he added another goal, this one coming on an assist from William Rosales.

“I think with William and Carlitos and Esteban they started passing it one touch and the whole team picked it up from there,” Von added.

Burroughs is now in the driver’s seat to finish second in league after Crescenta Valley clinched the league title with a win over Muir. Burbank High meanwhile rallied from a two-goal deficit to defeat Arcadia, 3-2. Burroughs had been tied with Arcadia for second in league.