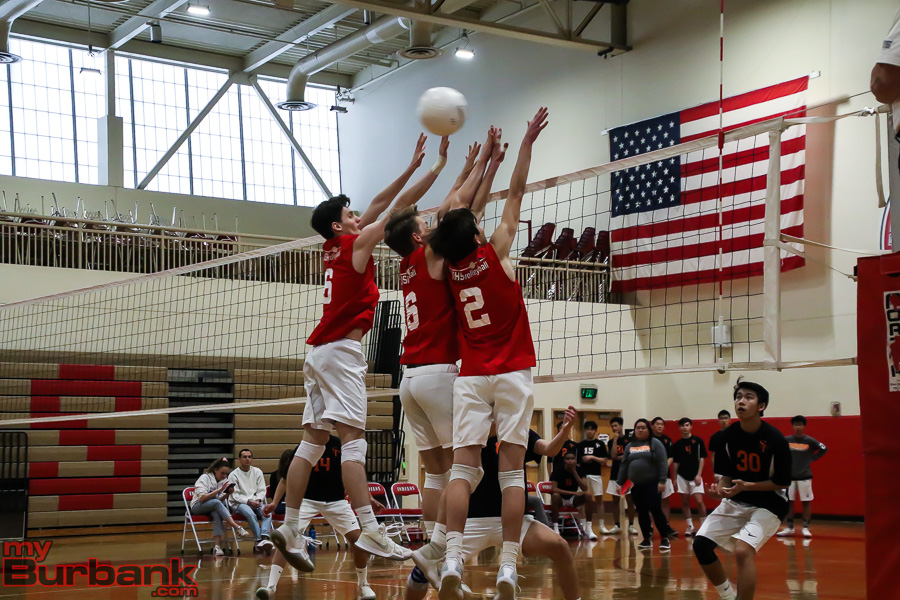 Sometimes a season opener can go sideways and turn out poorly, which isn’t the way to commence a campaign.

This didn’t happen for the Burroughs High boys’ volleyball team which needed only 68 minutes in order to sweep visiting South Pasadena in a nonleague battle.

The Indians have been the gold standard in the Pacific League, winning nine straight banners, and though not in midseason form, they were good enough to emerge with a win, 25-18, 25-13, 25-17 over the Tigers on Wednesday afternoon.

Junior outside hitter Connor Burroughs laid the ground work after tallying a match-high 16 kills with four of the Indians’ 11 aces.

“I thought there were some good things in that first set that were crisp, but there were kind of the usual first game of the year things that we have to get out of the way,” Burroughs coach Joel Brinton said. “I thought we set the tone in the first game in what we wanted to do and it was nice in the second set that our serving took over the game.”

Brinton then went on: “We’ve got a lot of good guys out there,” he noted. “So they’re going to approach it the right way. There weren’t a lot of learning opportunities out there, hence the time out.”

Brinton asked for stoppage when the Tigers came within 21-15 in the first set, but the Indians rallied and held their ground and captured the initial frame.

The third set was knotted at 2-2 before the Indians steamed ahead 7-4 on an ace from sophomore outside hitter/opposite hitter Kade McGovern (nine kills).

McGovern added a spike to make it 8-6 and senior middle hitter Jagger Green collected two blocks that gave the Indians a 10-6 margin.

A stuff from Burroughs handed the Indians a 13-8 advantage and when McGovern added a winner, the lead stretched to 14-8.

McGovern’s kill extended the lead to 16-10 and a spike from junior middle hitter Ellington Simmons pushed the cushion to 16-11.

When Burroughs added a kill, the Indians surged ahead 20-13 and an ace from sophomore setter Carter Cottrell (31 assists) made it 22-14 as South Pasadena asked for a time.

In the opening game, the Indians dashed ahead 4-2 on a blast from junior middle hitter Troy Outwater and when Cottrell contributed an ace, the lead expanded to 5-2. A service winner from Burroughs pushed the advantage to 8-3 for the Indians.

Senior outside hitter Luke Kvarda’s kill extended the lead to 9-4 and back-to-back service aces from Outwater made it 11-4.

McGovern’s dagger and a tapper from Burroughs supplied the Indians with a 14-6 lead as the Tigers requested a stoppage in play.

Consecutive kills from Burroughs saw the Indians dash in front 16-9 and when Outwater added a laser and senior libero Sam Tipton (six digs) contributed an ace, the lead swelled to 18-9.

A block and a kill from Burroughs then handed the Indians a 21-11 cushion and a kill from senior middle hitter/outside hitter Ricky Kahlon made it 21-15 as the Tigers asked for time.

Burroughs then outscored South Pasadena 4-3, including the clinching kill by McGovern.

The middle game saw the Indians burst ahead 5-3 on a service winner from Cottrell. An Outwater kill made it 8-6 and a spike from Burroughs gave the Indians a 9-7 cushion.

McGovern’s ace put the Indians in front 10-7 and another service winner by Kvarda pushed the lead to 13-9.

A taper from Burroughs gave the Indians a 15-10 edge, McGovern’s dagger extended it to 17-11 and a Burroughs bullet saw the Indians glide ahead 18-12.

Consecutive service aces by Burroughs saw the Indians draw ahead 22-12. A combined block by Outwater and Sadi made it 23-12, a Burroughs kill stretched the Indians’ edge to 24-12 and Sadi’s winner made it a two games to none lead.