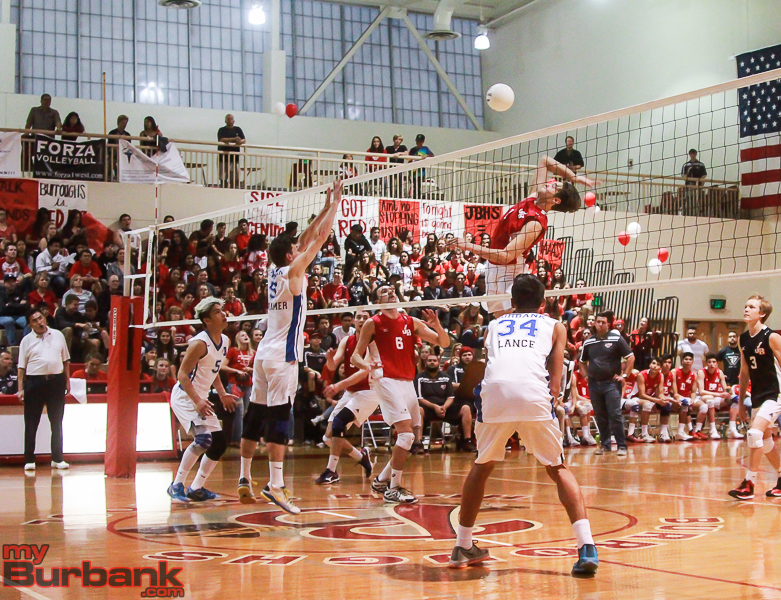 Mental toughness isn’t easy to quantify, but it’s an important ingredient when it comes to winning.

On Tuesday night, the Burroughs High boys’ volleyball squad was clearly tested and countered that with skill and mental sturdiness, capturing the last two games and disposing of host Crescenta Valley, 25-16, 23-25, 25-16, 25-23, in a Pacific League showdown.

For now, the Indians, who own a 51-match league winning streak and a potential eighth straight banner, can win the title with a victory over Hoover on Thursday.

“We maintained our poise,” Burroughs coach Joel Brinton said. “The first time we met this season, some weird things happened. But tonight we won the side-out battle and our passing was really good.”

Four players had double-digit kills and was led by Burroughs senior outside hitter Conner Ludlum with a match-best 20, followed by senior middle blocker Jarrett Malone with 15.

“I know that this is a different team, but I’m really proud of these guys,” Brinton said. “They’ve really put in the work since August and it’s paying off.”

Burroughs eased in front 13-9 on Rosal’s block and it became 17-12 on another Malone smash.

Remaining calm and cool, the Indians then cruised ahead 23-22 on Malone’s dagger and closed the set with a 2-1 spurt including Kaitz’s kill for the win.

In the third game, Burroughs controlled the early action and forged an 8-2 advantage on a kill from Malone and led 10-6 on Ludlum’s rocket.

In fact, at this point, Ludlum tallied four consecutive winners that made it 13-6 and when Malone contributed a kill it became 14-6.

At tapper from Ludlum pushed the advantage to 21-12 and it swelled to 24-16 on Rosal’s winner.

The second game was deadlocked at 5-5 on Ludlum’s kill, but the Falcons moved in front 13-9 on Dunkin’s ace.

Crescenta Valley then scored the final two points on a kill and a block from senior middle hitter Anders Johnson (nine kills).

The Falcons were paced by Jonathan Lee’s 11 kills while senior outside hitter Ben Allen added 10 and senior setter Gene Kim finished with 35 assists.