Behind a methodical and precise offensive attack, a wall of defense, the Indians tossed aside the Comanches, 25-19, 25-20, 25-19, and will play Long Beach Poly in a second-round match on Thursday. The Indians won the coin flip and will host the Jackrabbits at 7 p.m. 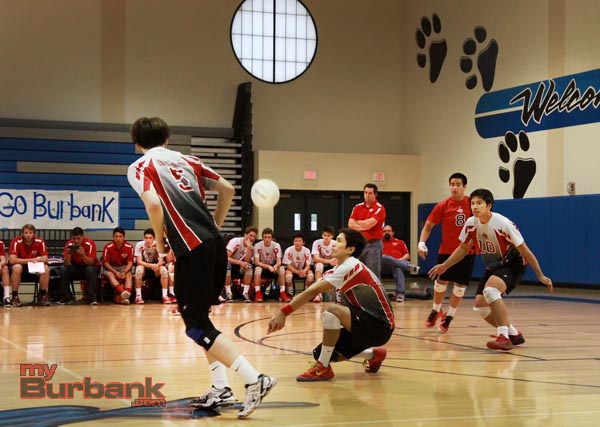 Burroughs has been dominant all season (Photo by Ross A. Benson)

The Indians had an undefeated ride through the Pacific League at 12-0, losing only one game out of a possible 36 along the way, but fell behind 5-1 in the third game.

With only four seniors on the team, and three on the floor, Canyon struggled somewhat as Burroughs tied it at 7-7 on junior middle blocker Max Chamberlain’s winner.

“We came out a little slow,” said Chamberlain, who tallied seven kills. “I like fast serves and a quick pace because it doesn’t allow too much time to think.”

Chamberlain felt the Indians would win in a sweep.

“We have a good middle,” he said. “We’re dynamic all around. I’m not a rah-rah guy, but I’m high energy. The coaches and players think that works for us.”

The Indians actually played the Long Beach Poly in the Redondo Tournament earlier in the season with Burroughs (21-7) losing the initial game, but then grabbed the next two.

“I remember the match,” Chamberlain said. “It was really early, like 8:30 a.m., and we lost the first game. We won the next two. I think we can beat them.”

The Indians went on an 8-4 blitz to lead 15-11, and it seemed like a matter of time before they would secure the match.

From that point the key figure was senior opposite hitter Nick Van Loo, who had a match-best 18 kills, including three during this final stretch.

“Our seniors played a key role,” Burroughs coach Joel Brinton said. “Our aggressiveness kept them [Canyon] out of the match.” 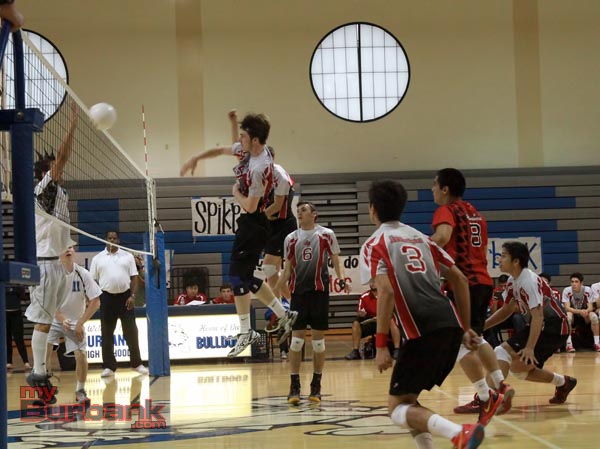 The Indians advanced to the second round (Photo by Ross A. Benson)

Brinton said he hopes his club will forget the meeting against Long Beach Poly. “We have to wipe this out of our memory. This is going to be a grudge match. We can’t take it for granted that we’re going to win.”

The opening game began with each team in the groove as Van Loo’s smash tied at 4-4, but the Indians seized control as they took a 9-4 lead on Van Loo’s kill.

It started to slip away from Canyon as the Indians employed a 7-4 spurt to forge a 21-17 cushion on Van Loo’s spike. Van Loo then added two more kills and an ace to finish off the game.

Burroughs came out strong in the second game and grabbed a 3-0 lead, but Canyon was stubborn tying it at 5-5 on a tapper from Young, who along with outside hitter Manny Parga had six kills and three aces.

“We were a good road-tested team,” Canyon coach Matt Peacock said. “We’ve played some good squads. I thought we had a real good chance of winning. A play here, a play there, and it’s a different game. It’s the playoffs. It’s crunch time. You have to make plays, and we didn’t when we had to.”