A first step was taken by the Burroughs High boys’ water polo team in the hope of capturing the CIF Southern Section Division V title.

The Indians’ 22-8 opening-round victory over visiting Whittier on Tuesday was established early with a first quarter barrage and continued in the second quarter as the Cardinals fell behind 15-1 at the half.

Burroughs has a second-round road date with Citrus Valley, which knocked off Hemet, 9-5, on Thursday with a 5 p.m. start. 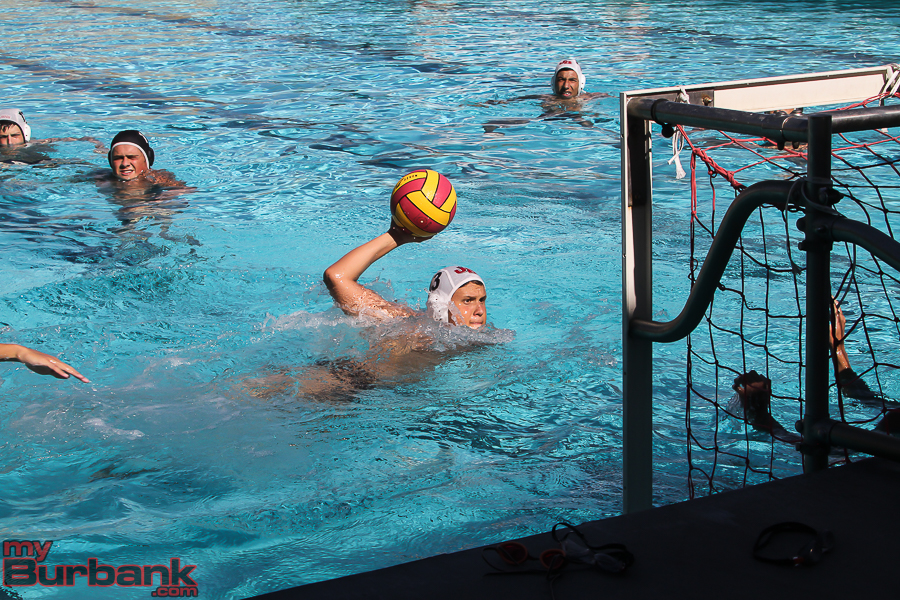 The Indians knocked off the Cardinals 22-8 in a CIF first-round match. (Photo by © Ross A. Benson)

Leading the charge for the Indians (21-6) were junior utility David Arakelyan with a match-best eight goals followed by senior utility Aram Nordanyan with seven.

Whittier (15-13) was paced by David Sarkissian with four goals as he scored two in the third and fourth quarters.

“I expected this,” Burroughs coach Jacob Cook said of the lopsided contest. “I look forward to the second round. I think we have a clear path to get to the semifinals.”

Arakelyan dropped in the first four goals in the opening period. His bullet with 6:46 left made it 1-0, and his strike sixteen seconds later put the Indians ahead 2-0.

“We kind of expected to do a really good job,” Arakelyan said. “We’re ranked No. 3. We’ve worked hard this season. It should be a little tougher in the second round.”

Junior utility J.J. Ambartsumyan scored with 3:07 remaining to make it 6-0 and rifled one in with 45 seconds left for a 7-0 edge.

The Indians outscored the Cardinals 7-1 in the second quarter with Nordanyan scoring back-to-back goals with 5:46 left to make it 9-1 and with 5:19 on the clock to make it 10-1.

A tally from junior utility Marko Vucetic and 4:42 on the clock put the Indians ahead 11-1 while Arakelyan’s laser 15 seconds later made it 12-1.

Vucetic’s goal with 4:02 left made it 13-1 and senior defender Jerry Solano’s goal with 3:14 left pushed the lead to 14-1. Arakelyan’s smash with 59 seconds left capped the opening-half output.

The No. 3 seeded Indians took it easy in the third and fourth quarters with the reserves in the pool and far less long passes.

“I took out my starters in the second half,” Cook said. “There were no fast breaks.”

The teams divided the next four goals with Arakelyan’s perfectly-timed back-handed attempt with 1:53 left making it 19-3. Ambartsumyan’s tally with one second on the clock made it 20-5.

Sophomore driver Simon Kharazyan’s goal with 4:46 left in the fourth quarter gave the Indians a 20-6 cushion and Nordanyan’s strike with 29 seconds left making it 22-7.

Junior goalie David Jimenez played the first and third quarters and had eight saves, while sophomore Andre Abramyan toiled in the second and fourth and collected five saves.