This comes after the team was honored last month with an on-campus lunchtime ceremony, in which the players were able to show off their CIF championship rings.

Mayor Jess Talamantes presented the team with a certificate of recognition.

“I know it is a long road. I was never part of a CIF championship team, but we always strived at the beginning of the season, whatever sport you were playing for, you always strive to be the champion,” Talamantes, a former Burroughs student-athlete said. “With one senior leaving, everyone is coming back. We’ll see you again.”

“It’s great to get recognized by the city. It’s great to be part of this team and to accomplish something as good as winning CIF,” Arakelyan said. “It’s a great feeling for all of us to be here for one another.”

“This was the first CIF championship for our program and second in the school’s 68-year history,” It was a huge deal for us. I’m really proud of these guys.” 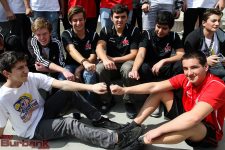 Burroughs Princiapl Deborah Madrigal was also on hand for the celebration.

“These boys did an amazing job and their team spirit and how they represented our school (was great),” she said. “We’re all very proud of them and know they’ll keep doing great things.”