The Burroughs High football team was not happy after losing by 35 points to Pacific League power Muir a week ago.

So the Indians came out motivated to show they were capable of better Thursday night.

They accomplished that feat and in a big win, topping Hoover of Glendale 69-0 at Memorial Stadium. 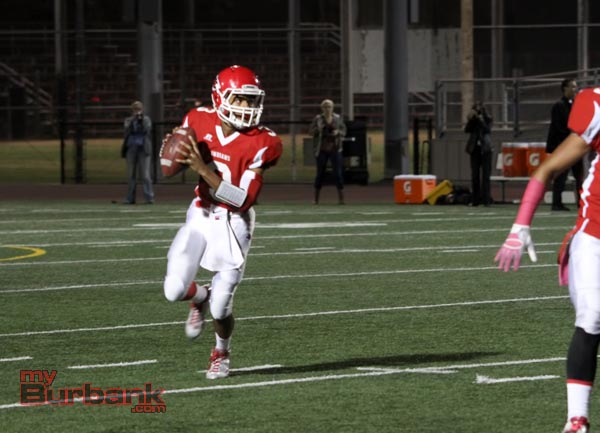 Andrew Williams threw for 174 yards and five touchdowns (Photo by Ross A. Benson)

“I’ve been taught that when you’re supposed to beat a team, you play hard and don’t (give them) any mercy,” Burroughs quarterback Andrew Williams said. “I think we had a bad taste in our mouth from Muir.”

Williams finished 13 of 17 passing for 174 yards and five touchdowns. He attempted just one pass in the second half, which was played with a running clock.

Burroughs led, 48-0, at the intermission.

Burroughs coach Keith Knoop said he wanted to use the Muir loss to motivate his players.

“I made that very clear to them that we were at the other end of that less than seven days ago,” Knoop said.

In spite of the lopsided score, Knoop praised Hoover.

“You have to give them credit. They never quit playing. They’re well coached. They did what they were supposed to do,” Knoop said. “We were just more athletic and we’ve got a lot more depth. I think they dressed 26 guys and tonight I dressed 53.”

Burroughs (4-3, 3-1 in league) opened the scoring as junior Javier Pineda scored on a one-yard run at the 8:54 mark of the first quarter. 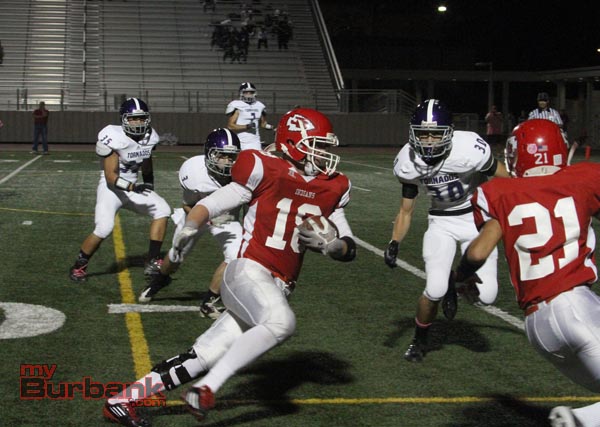 Joyce finished with four receptions for 65 yards and three touchdowns.

Burroughs took a three-touchdown lead with 1:32 left in the first quarter as Williams and Erick Hernandez hooked up on a 16-yard pass.

Things were just beginning to heat up for the Indians.

Williams found Aidan Anding on a 32-yard touchdown reception at the 9:07 mark of the second quarter.

Pineda added his second touchdown by scoring on a 36-yard run with 7:02 left in the first half to make it 35-0.

Joyce scored a second touchdown with 5:42 left in the first half on a 47-yard pass from Williams.

Joyce and Williams hooked up again with 2.2 seconds left in the half on a 5-yard touchdown for a 48-point lead at the half. 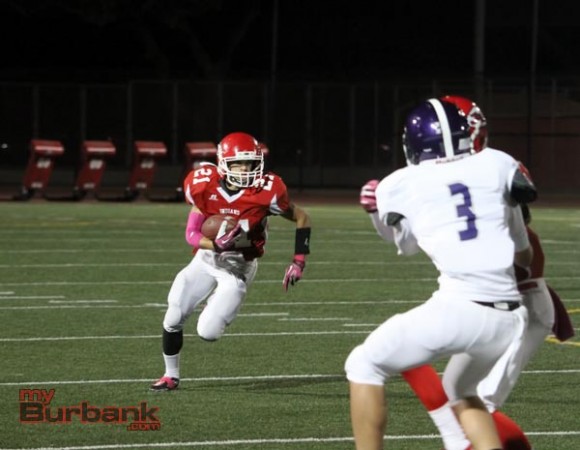 Aidan Anding carries the ball for the Indians (Photo by Ross A. Benson)

With a running clock required, Burroughs continued to pour it on with crisp execution on offense and a smothering defense that had their eyes set on the big donut.

Pineda, who had seven carries for 127 yards, scored his third touchdown at the 9:53 mark of the third quarter on a 55-yard run.

Eric Gordon scored on a 23-yard run at the 10:07 mark of the fourth quarter to make it a 62-point advantage.

Hunter Guerin completed the scoring on a 15-yard run with 2:17 to play. Guerin finished with two carries for 32 yards.

“I had a lot of kids eager to play when they got in there,” Knoop said. “There were some other quarterbacks that wanted to throw the ball and at this point I said we’re probably not going to do too much of that. We played the way we were supposed to play and hopefully we can keep that going. We’re starting to execute and get consistent.”

The Indians also got 40 yards rushing from Michael Ospina on six carries.

Anding had three receptions for 47 yards.

Burroughs next plays host to Pasadena on Friday night at 7 p.m.

Andrew Williams threw for 174 yards and five touchdowns (Photo by Ross A. Benson)

Aidan Anding carries the ball for the Indians (Photo by Ross A. Benson)