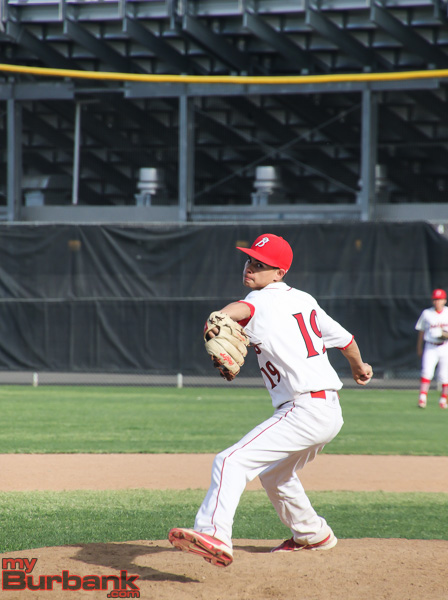 You know that the baseball season has begun when the weather begins to heat up and the sky turns a bright blue.

For Burroughs High and city rival Burbank, the two are looking to have a solid year and to make a dent in the Pacific League standings.

The Indians have divided four games in the Easton Tournament and are 3-4 overall this season.

Burroughs opens league play at Hoover on March 28 and visit Burbank on May 9 and host the Bulldogs on May 12.

“I’m not really sure what I have this season,” Burroughs coach Craig Sherwood said. “We’ve been good at times this season and we’ve been not so good.”

In 2016, the Indians had a successful campaign after tying Crescenta Valley for the top spot in league.

Burroughs began the season by winning the prestigious Easton tourney, 1-0, over highly-ranked Harvard-Westlake behind ace Kyle Nicol, who is now playing for Cal State Northridge.

Nicol’s place will be picked up by a bevy of competent arms like seniors Riley Hooper, Matthew Rudas, junior Salvador Cabezas and sophomore Niccolo Chuidian.

Additionally, Sherwood, who has been a longtime coach, will also have on the mound senior Henrik Buchanan, senior infielder Brandon Martinez, junior Jacob Real and junior Brandon Ortega.

All of these hurlers will need to be efficient in order for the Indians to repeat what took place a season ago.

If the old saying that pitching and defense wins games, the Indians, who went 19-7 and 12-2 in league, will need this to be their mantra.

“I think CV’s the favorite to win league this year,” said Sherwood, whose team fell in the CIF Southern Section opening round in 2016. “They have strong pitching and they have good tradition. Burbank is much improved and I think we’re going to be in the mix along with Pasadena and Arcadia.”

Sherwood stresses being able to catch and throw the baseball.

“Defense is always our No. 1 priority,” he said. “If you don’t hit well, you can always rely on your defense. It’s really important to have a good defense.”

Burroughs has several key players returning and they include senior infielder Justin Palafox, who batted .434 with 16 runs batted in and 17 runs scored, and junior first baseman Nathan Palafox, his younger brother.

“In high school, you don’t rebuild because there isn’t free agency,” Sherwood pointed out. “You reload and continue the winning tradition that we’ve built here.”

Burbank, which finished 9-13, 8-6 in league and lost to Mayfair in a postseason wild-card game, also has designs on being in the hunt.

Whether Burbank, which went 3-2 in the Easton tourney and is 3-3 this campaign, will be in the running actually depends on members of the highly-successful football team that include seniors Danny Porras and Jake Kelley.

Both Porras and Kelley have sustained fairly serious injuries, so Coach Bob Hart can’t count on them to play in that many games.

“If we’re healthy, I think we’re capable of being right there,” said Hart of the league race which begins at Muir on March 28. “If we’re not healthy, then the other guys have an opportunity to seize the moment and step up.”

Porras is a first baseman and pitcher and was also tabbed honorable mention, while the other projected starters are senior and all-league pick, Henry Leake, at third base, sophomore Davis Mieliwocki at first base, senior Johnathan Castaneda at second base, junior Maxwell Meltzer at shortstop and junior Matthew Shaugabay at catcher.

The outfield will consist of senior Chris Minnick in left field, senior Branden Phillips in center field and junior Abiezer Delgado, who will also be the designated hitter, in right field.

Seniors Chris Guerra and Owen Ruiz will see time in the outfield as will senior Javier Reyes, who can also play catcher.

The pitching staff will be paced by senior Matt Lungaro and senior Colby Vosgien.

“I think our pitching is going to be fine,” Hart said. “Colby is a left-hander and has been injured, but we’re hoping that he’s going to be able to help us.”