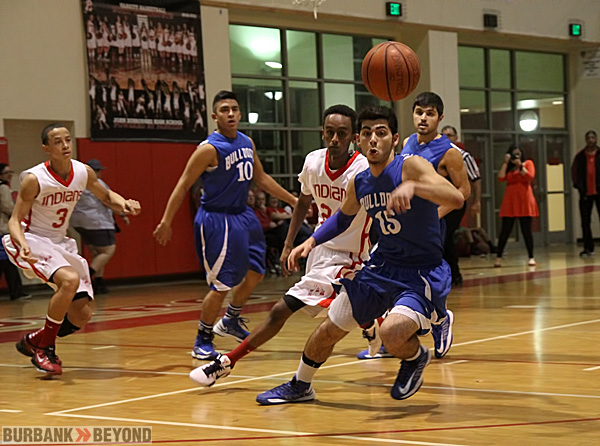 The two rivals will fight for city supremacy on Jan. 24 and Feb. 13 (Photo by Ross A. Benson)

Jerry DeLaurie is the Burbank High boys’ basketball coach, while Adam Hochberg holds the same position at Burroughs, and aside from the close proximity of the rival schools, they both believe the drive to capture a Pacific League title will depend largely on how well each fare during the holiday tournaments.

“We’d like to go 3-1 or at the very least 2-2 in these tournaments,” said DeLaurie, who is in his 19th season as a varsity coach. “We shot 73 percent from the free-throw line last year, and we’re going to have to do that again. If we keep opponents under 50 points, cut down on the turnovers and rebound, we’re going to win. We want to get better each game.”

The Bulldogs hosted the eight-team, five-day Burbank tourney last week and will commence league action at Pasadena on January 7. After two wins to begin their own tournament, Burbank lost its final two games.

Hochberg echoed a similar sentiment and wants his squad to play smart basketball after finishing 15-12, 5-9 in league with a spot in the CIF Southern Section Division 1-A playoffs.

The Indians began their season in the Simi Valley Tip-Off Classic and went 2-2 to claim a fifth place finish. They will kick off league play at Hoover on January 7.

“We will play consistently high-level basketball this season if collectively focused and locked in,” Hochberg said. “We need to focus on defense and keep our opponents off-balance and out of rhythm with different defensive pressure. If we improve our ability to execute in the half court, we will be competitive in the Pacific League.” 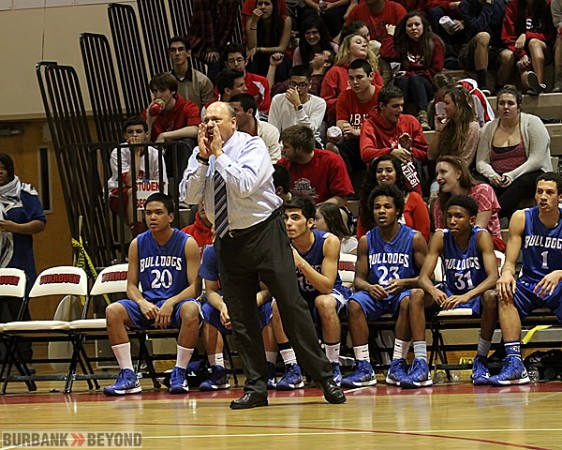 The Bulldogs, who went 16-13, 7-7 in league for fourth place and lost in the second round of the Division 1-A playoffs to top-seeded Santa Monica by a mere 12 points, will have senior Anthony Kardosh in the post.

A 6-foot-3 center, Kardosh, who averaged five points, six rebounds and two blocks, was a major cog last season and will once again be asked to shine.

“Anthony’s very athletic,” DeLaurie said. “We’re going to count on him to have an even better year.”

Senior Richard Elmoyan (5-11) is a guard and is coming off a campaign in which he scored 10 points with three steals and three assists per outing, and was chosen all-league. “If you need a bucket, Richard’s going to get it for you,” DeLaurie said. “He’s also very athletic.”

Mike Woods (6-0) is a talented first-year guard and poised to be a star. “Mike can dribble and get you a basket,” DeLaurie said. “He’s a good one and could play varsity ball in any league and that’s very rare for a freshman. He’s going to be special and will contribute the next four years.”

Burbank’s front court includes senior Adam Pasco (6-1), who dropped in five points a game, and senior Danny Terrones (6-3), who can handle the ball and also play in the back court.

“Adam’s a very good free-thrower, rebounder and good around the basket,” he said. “Danny can play inside or outside and hit the three-pointer.”

Senior guard Cody Bosman (5-10) will add an aggressive tone and a long-range jumper. “Cody didn’t play a lot last year, but he’s worked hard on his outside shot,” DeLaurie said.

Senior Raven Caraan (5-8) is a guard who looks to drain shots from deep. “Raven’s a good shooter who can hit the three-pointer,” DeLaurie said.

Senior Gabriel Perez (5-11) is a guard who transferred from Grant. “Gabriel’s a hustler who gets to the hoop,” DeLaurie said.

The back court reserves include junior Quinton Bright (6-1), who is athletic, can locate the hoop and is “flashy” according to DeLaurie, junior Joe Grass (5-7), who is a good defender, junior Adrian Gonzalez (5-7), who is an excellent ball-handler, sophomore Ellie Hanno (5-10), who is a solid shooter who prefers driving to the rim, senior Jose Rios (5-8), a transfer from Grant, and freshman Ben Chavez (5-10). 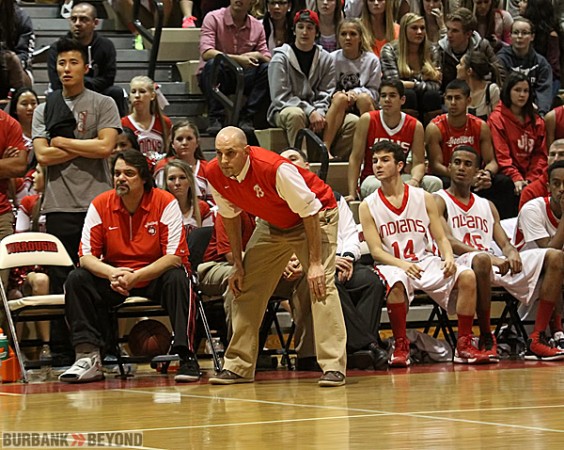 If Burroughs will have an impact this season a pair of seniors from Hogan Prep in Kansas City, Missouri, will do much of the heavy lifting according to Hochberg.

They are combination guard Amaad Wainright and forward Rashid Ewing, and each could be selected all-league.

“Amaad is the most talented individual to wear a Burroughs uniform in a number of years, and can play Division I college basketball,” said Hochberg of his co-captain. “Amaad can play anywhere on the floor because of his size and strength, and he’ll make his teammates better.”

Hochberg also heaped praise on Ewing. “Rashid is a game-changer, an electric player who can create for himself and play above the rim,” he said.

Senior John Cutone is a sharp-shooter who should provide instant offense. “John’s a vocal leader,” said Hochberg of his other co-captain.

Senior Jared Soliman will add points off the bench, while sophomore Steven Hubbell is a combo guard with a high hoop IQ, can dribble the ball in traffic and has terrific court vision.

The rest of the team consists of senior Jordan Bridges, who came over from Bellarmine-Jefferson, senior Eric Gordon, a transfer from Birmingham, junior David Schwer, a transfer from Village Christian, junior Steven Sanchez, junior Angel Cano, who is recovering from an ACL injury and should be back by the summer of 2014, and sophomore Ricardo Herrada, who is coming off an ankle injury.

Burbank and Burroughs will meet January 24 at Burbank and again on February 13 in the regular season finale at Burroughs.