Success in volleyball isn’t something new to Burroughs and Burbank highs.

Last season Burroughs accomplished the greatest feat in program history when it advanced to the CIF Southern Section championship match.

Although the Indians fell short against Oak Park, Burroughs got revenge by beating the same team to win the CIF Southern California Regional title.

But much of that 31-6 Burroughs team has graduated as stars Ryan Van Loo, Andrew D’Almada and  Cameron Capili graduated.

Burbank has a new coach in Gaby Gallardo, who previously coached  league rival Hoover High. She replaces Patrick McMenamin, who is now a full-time athletic director.

The Bulldogs finished second league a year ago, going 20-13. They lost in the first round of the playoffs to Lakewood.

The Indians graduated five seniors last year, but also have some returning talent. With starters Conner Ludlum and Skyler Bercini returning to the scene and coach Joel Britton at the helm, Burroughs seems to be in shape to make a run at an eighth straight Pacific League title.

But Burroughs also has a returning group, and one that will help push the team further.

“They kind of naturally have that leadership, the returning starters from last year,” said coach Britton about the starters returning to varsity. “We had sophomores on the court that found ways to contribute and play and now they’re juniors and they’re major contributors and they’re going to do a great job.”

Juniors Jose Solano and Levi Benitez, both of which are 5-foot-10, will try to fill the void left by Van Loo, who is now playing for Lewis University, at setter.

At middle blocker, Burroughs has a number of candidates led by juniors Diego Rosal (6-4), Billy Singleton (6-4) and senior Andrew Abrahamian (6-2).

Along with Ludlum, senior Jarrett Malone (6-4), senior Anton Prather (6-1), and sophomore Michael Rumfola (6-1) could see time.  Defensive specialist Khalil Johnson (5-11), who is a junior, could also see time as an outside hitter.

With a new head coach and three seniors, Burbank will look to dethrone the Indians as Pacific League Champions.

“We’ve been doing a lot of hard work, and they’ve made adjustments to what I expect from them,” said Gallardo said. 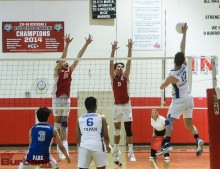 Gallardo said her group has put in the effort and is hoping it will lead to success.

“Working hard is going to help us in playing against Burroughs,” Gallardo said. “They’re always a dominating team, they’re always a good program. All I can have them do is give me the best, and we train as hard as we can so that when we do play them it will be a good game.”

With several returning seniors, the Burbank team seems to have some role models to help the younger players on the team.

Senior setter Jonathan Tapan (5-7) returns as the starter. Junior Brian Valmonte (5-10) will serve as his backup.

Juniors Jonathan Ragheb (6-0) and  Eugene Uvarov (5-11) have been impressive early on in their roles as outside hitters.

Senior Adrian Rivera (6-1) and junior Jonthan Valmonte will hold down the opposite role.

Junior Edward Curren (5-8) and senior Pierre Simonian (5-8) will see time at libero.
Junior Rory Rickey (6-2) and sophomore Luca Bily (5-11) will compete for playing time at middle blocker.
Gallardo added that the seniors on the team expect the younger players to step up their level of play.
“You’re playing on varsity and you need to play at a varsity level,” Gallardo said of her young team.