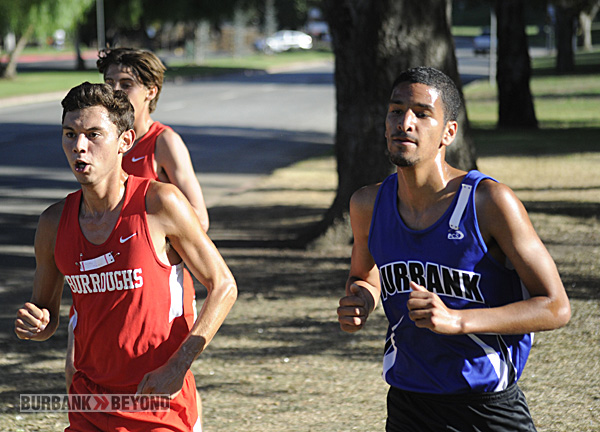 Every team’s goal in high school athletics is to win a league title. Or one would hope so. Striving to become a champion and then actually achieving that goal is a tremendous and satisfying feeling. But when a team in your league is ranked No. 1 in the country how would you approach the season?

When this team has won the last three CIF-Southern Section Division I cross country titles and two CIF-State Division I titles over the past three years and return eight of its top nine runners for 2013, what goals are actually realistic for the other teams in league?

For the Burroughs and Burbank boys cross country teams, the task ahead in the Pacific League is as daunting as it has ever been. Arcadia won the Nike National crown last year and will be the favorites again this season to win CIF, State and a National Championship. They rule the roost while everyone else runs for second.

So for Coach John Peebles of Burroughs and Coach Trevor Marca of Burbank, what is the mindset for this upcoming cross country season?

“You can’t really control your competition. All you can control is what you do as far as getting better,” said Peebles, who begins his 18th season at the helm for the Indians. “We have kids who are willing to put in the work and get better. That was the goal from the beginning.”

“We want to focus on our goals of making it to State again. I’ve had more talented groups but this one definitely works together the best as a team,” Marca said. “They are not afraid of hard work or pushing the envelope. They really want to be the best they can be.”

The Bulldogs and Indians each made the CIF Finals in 2011 with Burbank advancing to State as well. The two cross-town rivals and Crescenta Valley will battle Arcadia every step of the way with odds heavily stacked against them.

Leading the way for the Burbank boys’ team will be a six-pack of elite runners: seniors Elliot Choe, Arsen Mkrtchyan, Ethan Moskowitz, and Gabriel Ellman, and juniors Enrique Vizcaino and Brennan Doyle (transfer from Notre Dame).

Several of these top-flight long distance runners ran more than 90 miles in Mammoth while training for one week during August.

Choe is one of five returning lettermen who expect big things.

“I’m very excited and looking forward to the new season,” Choe said. “Our team has become stronger and we are all coming together and bonding. We are hoping for better results than last year.”

For the Lady Bulldogs, senior Arlette Movsesian returns as does sophomore Candela Fernandez. Freshman Gabby Collins will look to make an impression right away.

“I’m really excited. This is like the homestretch of my running career. I’m excited what is in store for me,” said Movsesian who won the All-City meet a year ago. “I feel we are stronger than we have ever been. Not just my high school career but as Burbank has ever been.”

“This season is going to be great. I’ve had a blast coaching them,” added Marca, beginning his 10th season at BHS. “They are a close-knit group that works really well together.”

Burroughs will look to the always-improving Ricky Mendez who won the All-City meet last year. Mendez will be pushed by junior Garrett Boulais who was the most improved runner over the summer. Junior Shane Thompson will also be a strong runner for the Indians.

“I am looking forward to the season. We are going to try to go to State this year,” said Mendez, a senior. “We are trying our best to go farther this year than last year.”

“The summer training was inconsistent but based upon what we did last year we have a possibility of doing some good things,” Peebles said of the boys. “It’s going to be tough cracking the top three in league but we will run our butts off and whatever happens happens.”

The Lady Indians will turn to juniors Valerie Monroy and Miranda Acosta to forge the way. Sophomore Eileen Eckles has the ability to be the team’s best runner after she recovers from a stress fracture.

“We have a bunch of talent on the team,” Monroy said. “The younger girls are pretty good and the girls from last year are pretty strong. I hope we do pretty well this year.”

There will be no home meets at Griffith Park this year for Burbank or Burroughs.