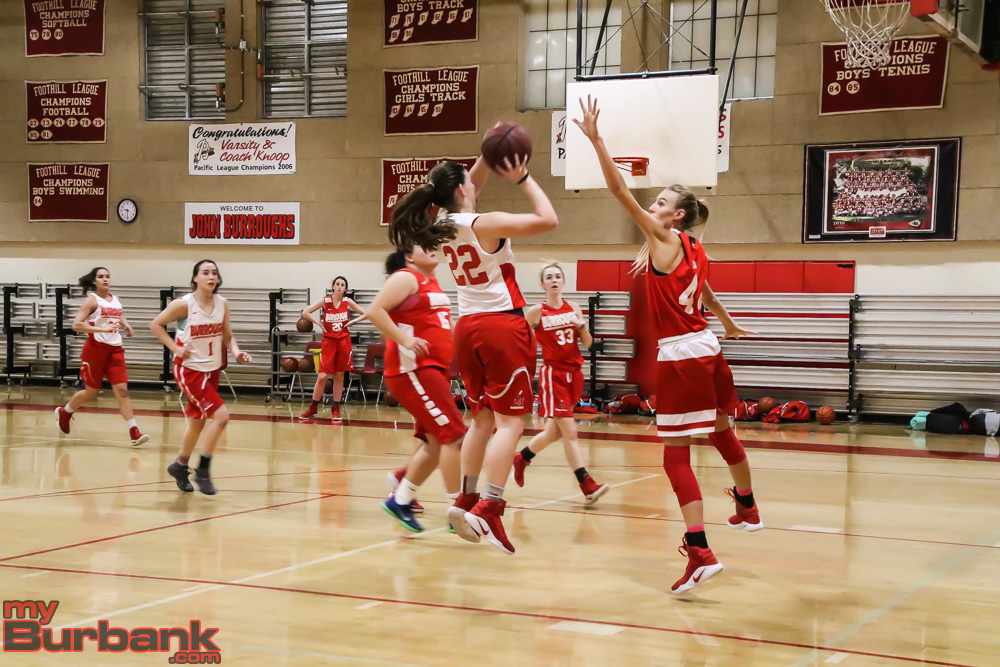 When the Burroughs High and Burbank girls’ basketball teams take the floor, it’s with conviction that every game is winnable.

The Indians, 17-12 and 8-4 in the Pacific League, tied for second last season, will be paced by 6-foot-4 senior center Marin Grote and 5-3 junior point guard Arianna Farias.

“Both started last year and are expected to lead the way,” said Burroughs coach Vicky Oganyan, whose squad had its four-season run as the league champion snapped.

Oganyan expects the Indians, who lost in the first round of the CIF Southern Section Division I-AA playoffs, to be competitive.

“The girls have had a good summer and fall by playing a lot of good competition,” she said. “Our focus will be being tough defensively, playing really hard and competing every second.”

It won’t be easy, but Oganyan believes the Indians will be in the hunt for the league title. “League should tough,” she noted. “There are a lot good coaches and good teams.”

The Indians will play in their own tournament and then begin league action on Jan. 3 at Arcadia.

Burroughs will play at longtime rival Burbank on Jan. 19 and host the Bulldogs on Feb. 8.

The Indians are loaded with junior guards who spent time on the floor like 5-2 Ayumi DeHerrera, 5-7 Jillian Kukawski, 5-6 Camryn Lotka, 5-5 Emily Gutierrez and 5-8 Nicole Rumfola, who will also see time at forward.

“All of these girls have improved and look forward to contributing,” Oganyan said.

Senior Jenny Galvan is a 5-3 guard coming up from the junior varsity who should help off the bench.

There are a number of talented sophomores such as 5-5 guard A’sia Morales, who is a “slasher, a good rebounder and a great defender,” according to Oganyan and 5-6 guard Sophie Hawkins, who is “being counted on as an outside shooter,” said Oganyan.

There are also freshmen and they include 5-7 guard Dyani Del Castillo, 5-11 forward Faith Boulanger and 5-9 forward Kayla Wrobel.

Other first-year players include 5-5 guard Liliana Gonzalez, who plays solid defense according to Oganyan and 6-0 Sydney Martin, who will play the post.

The Bulldogs are coming off a campaign in which they posted a 14-15 overall record and 5-7 in the league, good for fifth place along with Arcadia.

The Bulldogs are 1-2 this season with losses to Saugus 52-47 and Lancaster 63-39 in the Brentwood Tournament and a win versus the Archer School for Girls 49-28 in the same tourney.

Second-year Burbank coach John Wells said “the league is fairly-well balanced and that no team should go undefeated,” and employs a four-guard offense, hoping this will add more scoring and passing.

For Burbank, which begins league action at Hoover on Jan. 3, hosts Burroughs on Jan. 19 and visits the Indians on Feb. 8, everything begins with 5-7 junior shooting guard Osanna Tirityan, who has been a force for two seasons.

“Osanna is a great scorer and a great rebounder,” said Wells of Tirityan, who averaged 16.3 points, 9.7 rebounds, 2.3 assists and 2.1 steals. “She’s an all-around player.

Junior point guard Emily Monterrey, at 5-5, will also have the ball in her hands.

“Emily is a strong passer and likes to go to the basket,” Wells said.

Senior guard Sophia Jimenez is 5-5 and will add some offensive punch to the lineup as will 5-9 senior forward Kate Lynn Monterrey.

Sophomore guard Brianna Castro, at 5-4, is a very dependable shooter according to Wells.

The lone forward is 5-9 junior Sofia Aslanyan, who should contribute points and add muscle.

“Sofia is a strong offensive rebounder,” Wells said. “She has a strong post presence, but will be asked to play more than just the post.”

Coming off the bench is 5-4 junior guard Jasmine Chavez. “Jasmine is an aggressive defender and a good offensive slasher,” Wells noted.

Junior forward Dakota Cortez is 5-4 and can be counted upon to pick up stray balls.

“Dakota is a strong rebounder on both ends of the court,” Wells said. “She’ll dive for loose balls.”

Junior point guard Emily Monterrey is 5-5 and a “strong passer and goes hard to the basket,” according to Wells.

Despite being young, 5-5 freshman guard Jayla Flowers will contribute. “Jayla is an athlete and a great offensive rebounder,” Wells said. “She will be asked to guard the other team’s best player.”

Freshman guard Erika Montoya stands 5-3, but is still able to make herself into a crafty defender according to Wells.

Senior forward Amber Kassens is 5-5 and a relentless worker. “Amber is a good shooter and works hard on defense,” Wells said.

Junior guard Desi Gomez, at 5-3, will also be in the backcourt. “Desi is a spot-up shooter and a tough defender,” Wells said.