Any time rivals get together, it’s likely to be fiercely contested, and when third place is on the table in the Pacific League girls’ soccer standings, it’s even more hotly contested.

Under this scenario, Burbank High rallied for two goals in the second half against visiting Burroughs and ended in a 2-2 tie on Thursday.

Both teams will compete in the CIF Southern Section playoffs and the pairings will be announced on Monday at 10 a.m. 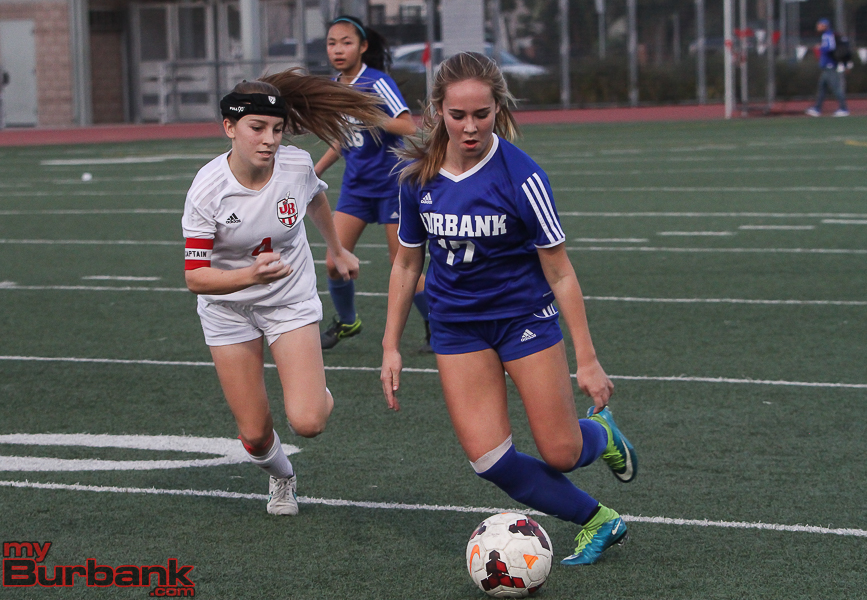 Burbank hosted Burroughs in the Pacific League finale that ended in a 2-2 tie. (Photo by © Ross A. Benson)

“The first half went in our favor a little bit, but it was pretty close,” Burroughs coach Brady Riggs said. “Burbank plays a lot differently than we do. They kick the ball long and try to get the ball in the box. We pass the ball a lot more.”

Junior forward/midfielder Kira Bochard knocked in a pair of goals for the Bulldogs (10-4-3 and 9-4-1 in league), including the match-tying tally against goalie Emma Bartram with three minutes left.

“Kira has a motor that won’t quit,” Riggs said. “She’s a great player and both of her goals came on just one pass. She doesn’t need a lot of room to score. I think maybe we were a little fatigued as a team in the second half because we had six minutes of extra time added on.” 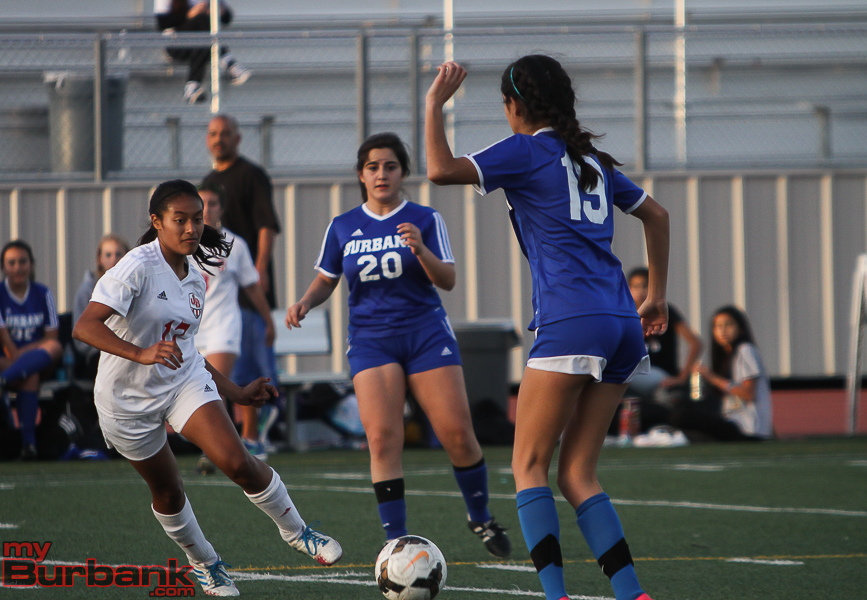 The Bulldogs defeated the Indians 2-1, but settled for a 2-2 tie in the regular season capper. (Photo by © Ross A. Benson)

Bochard’s goal in the 20th minute trimmed the Indians’ lead to 2-1 and came against Bartram, who had seven saves.

The Indians (12-4-1 and 9-4-1 in league) took a 1-0 lead when senior forward Jazmine Valdez scored a goal from the right side on a corner kick in the 16th minute against junior goalie Nicole Winters, who had four saves.

With two minutes having elapsed in the second half, sophomore outside backer Maddy Sena’s long shot from the right side over Winters made it 2-0 and was assisted by junior midfielder Mireya Gonzalez.

The Bulldogs knocked off the Indians 2-1 at Burroughs on Jan. 22.