Memorial Field will be buzzing with excitement as it hosts two high school football games over the next two nights as Burroughs plays Hoover tonight while Burbank faces Muir on Friday.

The Indians enter tonight’s Pacific League match with a 3-1 record, and 1-0 in league after routing Muir at home by 40 points last week.

Burroughs averages just over 41 points per game, while surrendering 18 points per outing.

The Tornadoes are 1-3, 0-1 in league and have a one-dimensional offense that is heavily-tilted toward the run.

Junior quarterback Quinton Smith has passed for 31 yards, and has been intercepted three times without having tossed a touchdown.

On the plus side, Smith has rushed for 116 yards with one score, while Hoover’s leading ball-carrier is senior fullback Calvin Lopez, who has gained 191 yards and tallied two touchdowns. 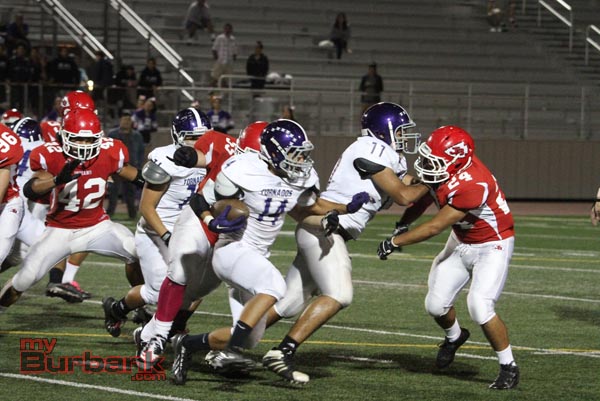 Burroughs’ defense will need to stop the run against Hoover. (Photo by Ross A. Benson)

Sophomore running back Maurice Herrera has 175 yards and one score, and junior running back James Tumbucon has 113 yards with one tally.

Burroughs has a diverse offensive attack that will cause the Tornadoes major problems.

It begins with senior quarterback Steven Hubbell, who has thrown for 10 touchdowns with two interceptions and 656 yards.

Junior running back Chance Bell has rushed for 514 yards, scored 10 touchdowns and has 50 receiving yards.

The Bulldogs are primed for another big performance against the winless Mustangs, who average 10.5 points per game, while allowing just under 48 points.

Burbank has scored at least 35 points twice, and its defense has limited the last two opponents to nine points in wins over Canyon (35-6) and Crescenta Valley (7-3).