Now that the preliminaries are over, it’s time for the main events and they commence Friday night at 7:30 p.m. in CIF Southern Section Southeast Division opening-round playoff matches as Burroughs High hosts Norwalk at Memorial Field, while Dominguez Compton plays Burbank at Moyse Field on the campus of Glendale High.

The Indians went 7-0 in the Pacific League, 9-1 overall for the first time since 2006, and own a nine-game winning streak after knocking off Burbank 47-21 behind senior quarterback Steven Hubbell’s five touchdown passes and 265 yards.

Hubbell has thrown for 1,507 yards with 25 scores and three interceptions. Hubbell has an additional 202 yards on the ground with six touchdowns.

The Indians’ best and most-productive tailback has been junior Chance Bell, who has 1,375 yards with 23 scores, and is coming off a 165-yard performance against the Bulldogs. 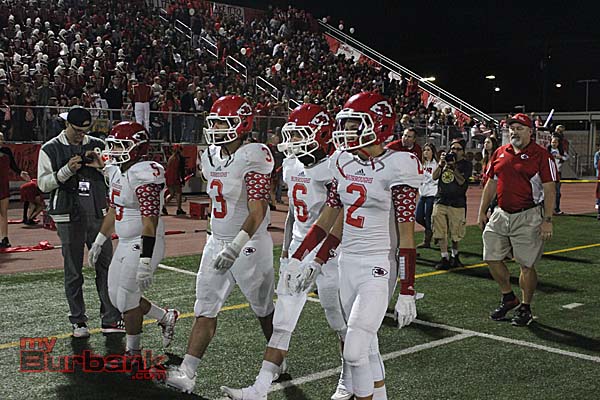 Burroughs players meet for coin toss against Burbank. The Indians will host Norwalk in a CIF opening-round playoff game on Friday. (Photo By Ivan Galan)

The defense has been solid and is led by multiple players including senior lineman Cole Gurley (14 solo tackles with 45 assists, 10 sacks and one fumble recovery) and senior linebacker Branden Garcia (nine solo tackles and 54 assists). 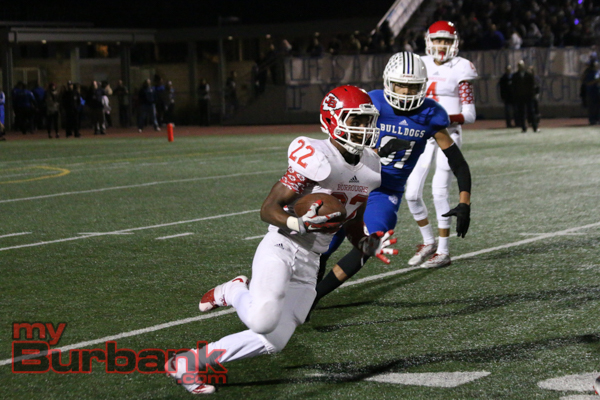 JB tailback Chance Bell will need to have a huge outing versus Norwalk. Photo By: Edward Tovmassian

Norwalk (5-5 with two unreported scores) prefers to run the football and is led by senior Chris Walker (659 yards with eight scores) while senior Kirk Brown has 556 yards with nine scores.

Senior quarterback Ausencio Navarro has thrown for 473 yards with two scores and one pick, and his favorite targets are junior Raylind Butler (11 catches for 170 yards) and senior Andrew Maldonado (six catches for 120 yards).

Junior defensive end Jordan Thomas has 35 solo tackles with four sacks, one fumble recovery and one pick, while Brown, an outside linebacker, has 32 solo tackles.

The Bulldogs (6-4 and 5-2 in league) have gone 4-2 over their last six games and look to rebound after the loss to the Indians. 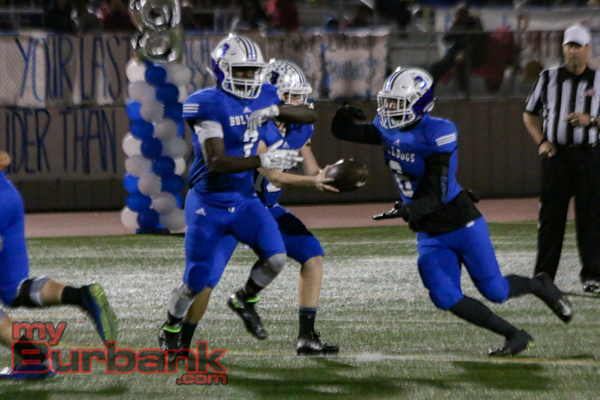 BHS quarterback Guy Gibbs will run the offense in a CIF first-round match versus Dominguez Compton. Photo By: Edward Tovmassian

Junior wide receiver Forest Fajardo has 21 catches for 324 yards with six scores, while sophomore running back Darnell Williams has 13 receptions for 125 yards.

Williams is the leading rusher with 556 yards and five scores, while sophomore running back Blake Quinteros has 389 yards with four touchdowns.

Fajardo, a defensive back, has 34 solo tackles, 12 assists, five picks and 14 passes defended, while junior lineman Damien Flores has 24 solo tackles, 26 assists, two sacks, one interception and one pass defended. 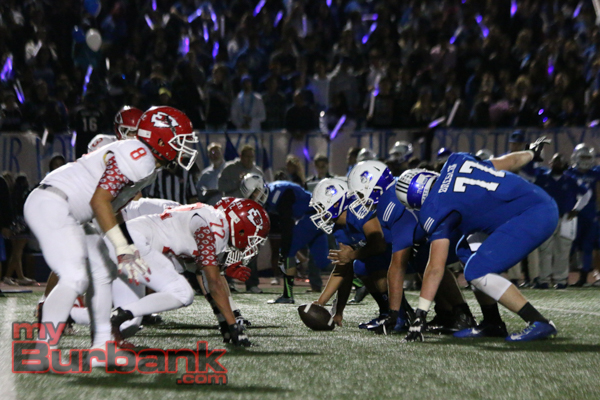 Burbank’s offensive line will be crucial on Friday versus the Dons. Photo By: Edward Tovmassian

Dominguez Compton (7-3) is a run-first offense and is paced by senior Ioane Niupulusu (1,058 yards and eight scores). Senior Henry Williams has 961 yards with nine scores and senior Royce Anson has 941 yards with nine touchdowns.

Junior Craig Tafua is the quarterback and has 375 yards with six scores and two interceptions.