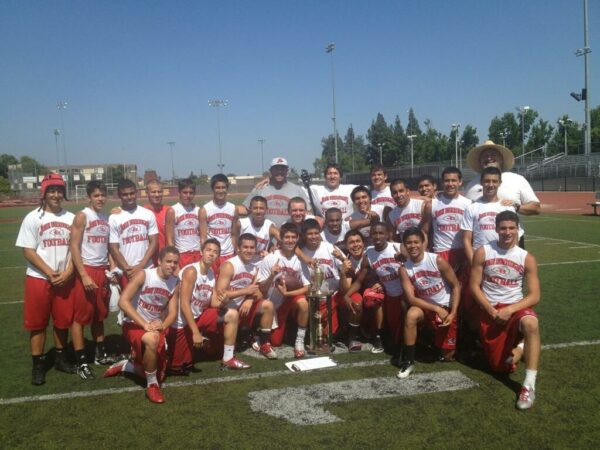 Even though it’s only summer, a victory is a victory and a celebration is a celebration. Showing major strides in its passing game, Burroughs defeated league-rival Crescenta Valley, 20-10, in the championship game of the Arcadia 7-on-7 summer passing tournament this past Saturday.

Coming off a 4-6 campaign in 2012 and not qualifying for the CIF playoffs, the Indians are using the summer to fine-tune their offense to get back on track to the level of where they won consecutive league championships in 2009, 2010 and 2011.

“I’m really proud of our young guys who stepped in and played well,” Burroughs defensive coordinator Kenny Knoop said. “We played without Andrew Williams, Conor Joyce and Sean Johnson. Joyce and Johnson were both at the San Jose State team camp this weekend. The defense played very physical to control the day.”

Williams is the Indians starting quarterback and Joyce the team’s top receiver. Johnson is a projected division one college cornerback that solidifies the defense. For Burroughs to win the tournament and be as successful as they were without three of their best players speak volumes to the depth and experience returning from last year’s squad.

Hubbell threw 12 touchdowns with no interceptions while Hernandez caught seven touchdowns. Guerin had four interceptions. All three players are sophomores.