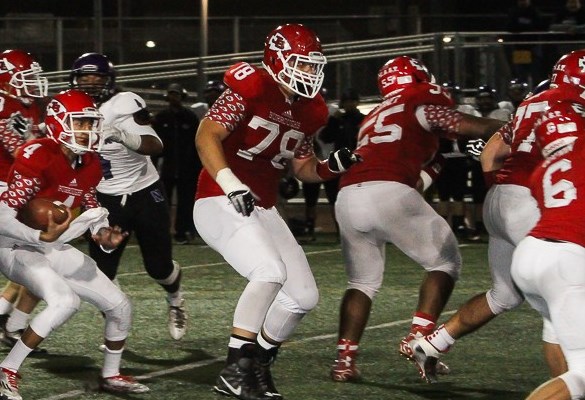 Burroughs High offensive lineman Jesse Chamberlain has become the second member of his family to accept an athletic scholarship to a major university.

Following in the footsteps of his older brother, Max, who plays volleyball at Pepperdine, Jesse has announced he will play college football at Fresno State University.

“This recruiting process has been amazing. Just thinking back a couple years ago I would never in a million years think I would be going this far with football, the sport I love,” Jesse wrote on his Twitter account. “I would like to thank my parents and coaches who helped me get this far.”

A 6-foot-4, 285-pound guard, Chamberlain was an All-CIF selection and first-team Pacific League pick last season.  He chose Fresno State over an offer from the University of Idaho.

Chamberlain led the offensive line that helped pave the way for running back Chance Bell, who rushed for 1,378 yards and 23 touchdowns last season.

The commitment of Chamberlain is Burroughs’ second for the class of 2017. Last month Bell announced he was committing to San Diego State.

If Fresno State’s coaching staff remains the same a year from now, Chamberlain will be playing for offensive line coach Mark Weber, who coached Burroughs coach Mike Reily at the University of Nevada, Las Vegas.

Fresno State offensive coordinator Eric Kiesau is another with local ties as he played at Glendale Community College and Glendale High.