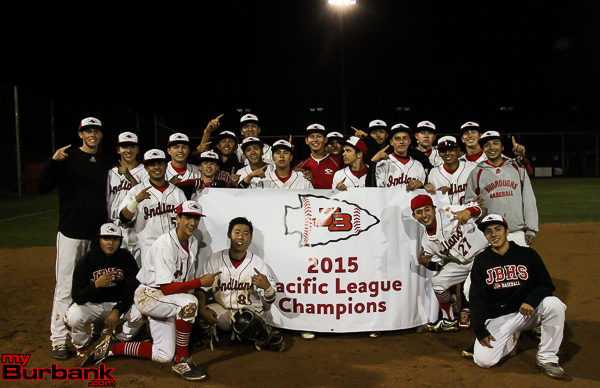 A 90 minute lightning and rain delay didn’t deter the Burroughs Indians from ending the regular season in style. A day that began with Senior Night recognition ended with another dogpile as Burroughs defeated Burbank, 3-1, to sweep the season series from their crosstown rivals.

Max DeAmicis’ two-run single in the third inning was all that Thomas Wilson needed as the 6-foot-4 right-hander threw six innings and gave up four hits, no runs, walked one and struck out six Bulldogs. 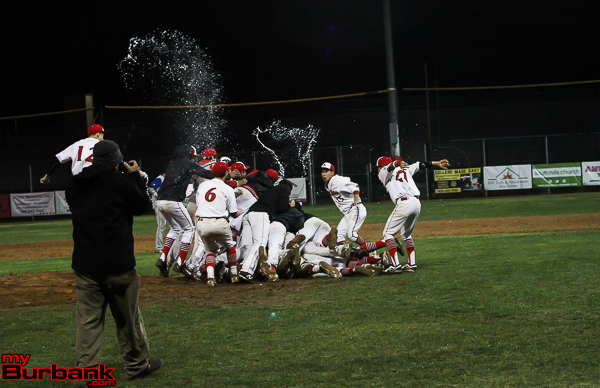 Another victory; another dogpile (Photo by Ross A. Benson)

Burroughs (23-4, 13-1) added an insurance run in the bottom of the sixth on the very first pitch after the hour-and-a-half delay. Roy Hirota smashed a single to centerfield scoring Kevin Navarro and the Indians went ahead 3-0.

Burbank (12-12, 7-7) threatened in the top of the seventh scoring one run off DeAmicis when Alex Minnick singled in Chandler Robbins for the Bulldogs’ first run of the contest. With runners on second and third and two out, DeAmicis struck out Fischer Cabot to end the game.

Just like the softball game the previous evening, neither team had an extra base hit.

Indians centerfielder Aidan Anding had two hits and a stolen base. Chris Peres had a pinch-hit single for JBHS and played solid defense at first. 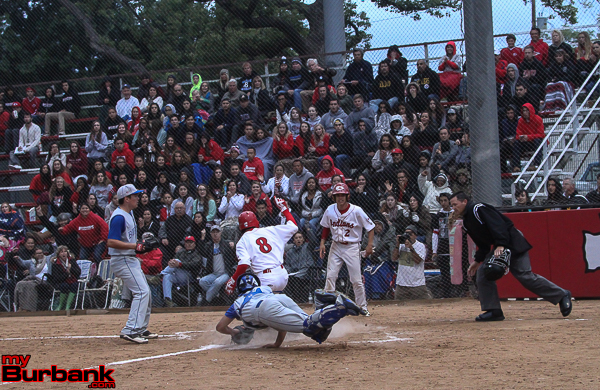 Burroughs’ Ryan Galan slides in safely at the plate just before the tag by Jake Noud of Burbank (Photo by Ross A. Benson)

“After the loss at Pasadena, I looked in the eyes of all my teammates and I told them that we are not losing another one,” said Peres, who will be playing at the University of La Verne next fall. “That was our goal. We are not losing anymore.”

Peres credited the team’s success to coming together as one unit with a common goal in mind.

“At the beginning of the season, we were separate,” he said. “We meshed as a whole and now we are basically brothers. We do everything together. We made our own events to blend together.”

The Indians did indeed come together and had one of the best seasons in Burroughs baseball history. They have won a school-record 23 games (presumably since there are no official records), and ended the regular season with 13 straight wins and 19 of their last 20. 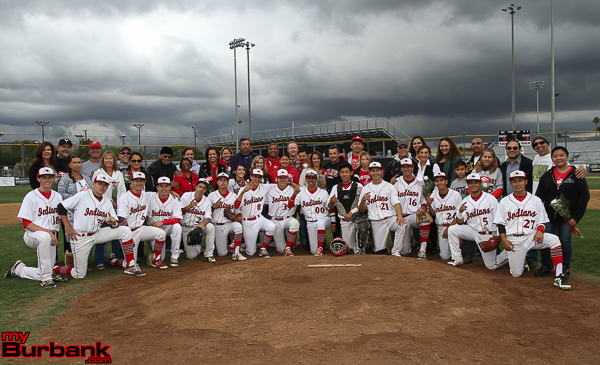 Burroughs Senior Class and Parents (Photo by Ross A. Benson)

The senior pitching duo of Wilson and Danny Bustos ranks up there with the best in Southern Section history. Wilson went 8-0 with a 0.64 earned run average in 54 innings of work including an era of 0.82 in league.

Wilson and Bustos each went 5-0 in league as they dominated the opposition with relative ease. 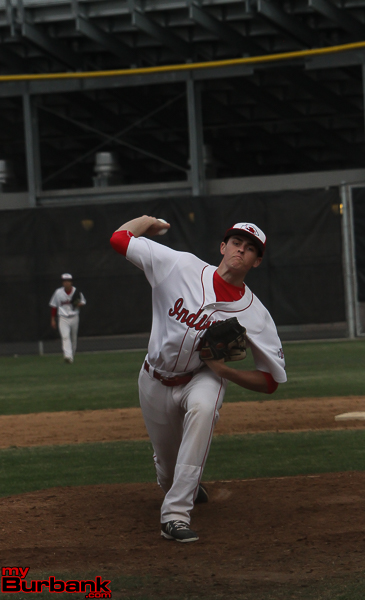 Thomas Wilson shined once again (Photo by Ross A. Benson)

In 27 games, the Burroughs pitching staff had an astounding 1.70 era in 189 innings.

With a steady and consistent defense behind them, Burroughs will have an opportunity to advance throughout the CIF playoffs. If there is any concern, the Burroughs’ offense will have to play at a higher level against stiffer competition beginning May 22 when the playoffs start.

“If we come out hard and fast like we do every time we play a tough opponent, it’s going to be great to watch what will happen with us,” said Peres.

While Burroughs sits back and enjoys a well-deserved four days off, Burbank must wait for the Arcadia-Crescenta Valley result to see if they will earn a berth into the playoffs.

Burbank needs Arcadia to lose to advance. Should the Apaches defeat CV, the Bulldogs will be on the fence to get in. A Falcons’ win sends the Bulldogs to the playoffs as the automatic fourth place entry from the Pacific League. Arcadia-CV is scheduled for tonight but must play by tomorrow to determine the league standings.

The CIF Division 2 playoff pairings will be announced on Monday morning at 9 a.m. Stay tuned.