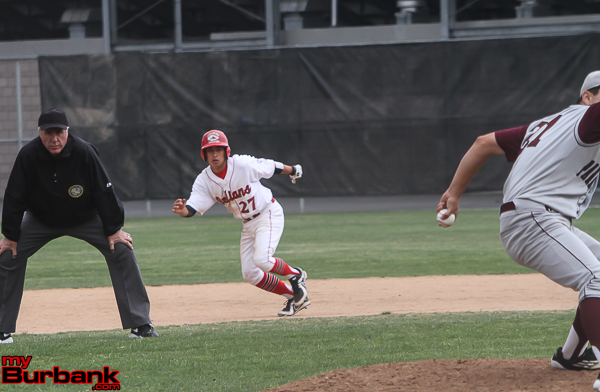 Max Haddad leads off second base after a double (Photo by Ross A. Benson)

Burroughs took the field Friday afternoon on a 13-game winning streak highlighted by a league title. The stands were full, alumni and friends gathered behind home plate, distinct guests dotted the surroundings, and excitement wafted through the air. Ahh…it must be playoff time.

Picking up where they left off, the Indians played a stellar game in all phases en route to a 3-2 first-round victory over the Paramount Pirates. No. 5 seed Burroughs (24-4) advances to play Moorpark at JBHS at 3:15 pm on Tuesday.

It was Burroughs’ first playoff win in the first round in more than a decade. The Indians do own wild card victories in 2008 and 2013. Burroughs hasn’t reached the CIF Quarterfinals since 1998. A victory over Moorpark would match that feat 17 years ago. 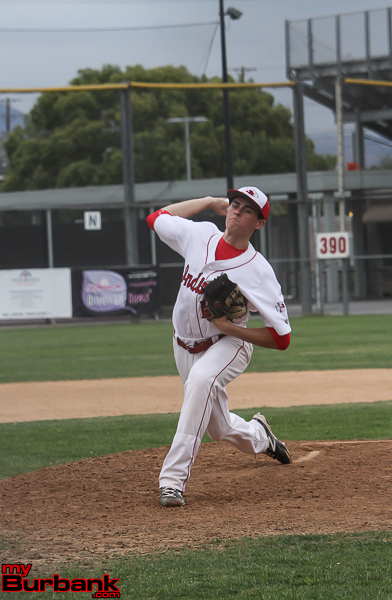 Thomas Wilson won his ninth game of the season (Photo by Ross A. Benson)

“Every game is tough. It’s emotion, it’s concentration, it’s all those things,” Burroughs coach Craig Sherwood said. “It’s the playoffs. It’s the greatest time in the world. It’s what you work for nine months of the year.”

“We came out fired up and we knew we had to win this game,” Indians’ second baseman Max Haddad added. “I felt we took pretty good at-bats at the plate and hit balls hard. We just need to stick with the same approach and let the baseball gods do the rest.”

The infield duo of Haddad and shortstop Ryan Galan turned two crisp double plays to thwart Paramount (16-17) in the second and fourth innings.

Haddad and Roy Hirota each had two hits apiece as the Indians mustered just enough runs to slide by their first round opponent. 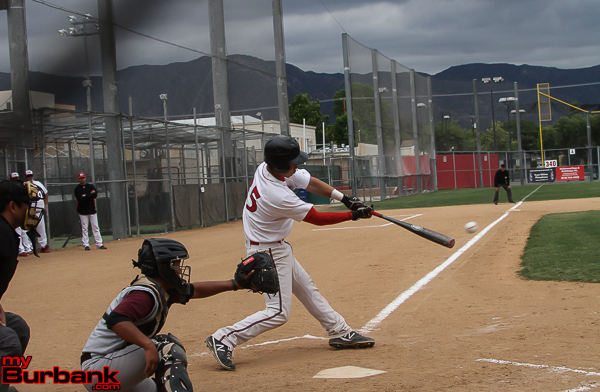 “He’s capable of doing that. He’s got a little bit of power,” said Sherwood of Hirota’s blistering double. “He’s an overlooked player that schools should be looking at now.”

Paramount rallied in the fifth inning scoring two runs on three hits to cut the deficit to one run.

The Pirates made one last attempt to upset the champions of the Pacific League in the top of the seventh. A single, sacrifice bunt and passed ball had the tying run 90 feet away. True to form as he has done all season, Wilson dug deep and recorded a 6-3 groundout to end the game. 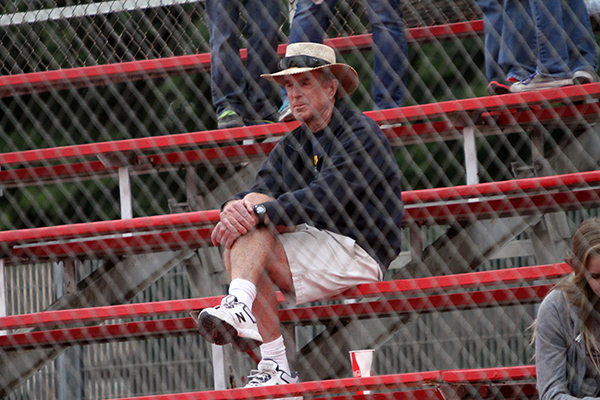 Galan’s smooth fielding and accurate throw across the diamond sent the Indians into the second round to face the Musketeers who beat JBHS 7-3 back on March 5 in the Easton Tournament.

With graduation set for May 28 and the playoffs still ongoing, this is quite the exciting time for the 15 Burroughs seniors.

“It feels great. Just happy to play another high school game,” Haddad said. “None of us want it to be our last. We are going to keep grinding and pushing to the end.”