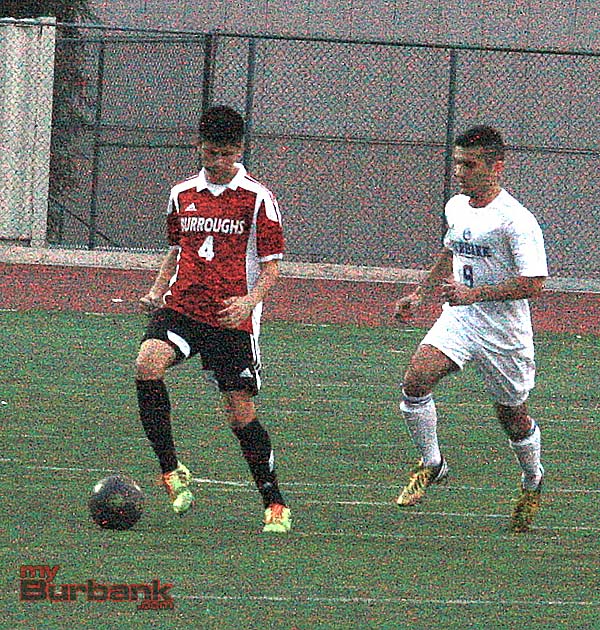 Ashot Veisyan scored two goals and Brandon Gerlach and VJ Salazar each added a goal as the Indians completed the first round of league play at 6-0-1 and in sole possession of first place.

Salazar scored 29 seconds into the match and Veisyan fired a shot into the Burbank goal eight minutes later that staked the Indians to a quick 2-0 lead.

Veisyan added another goal in the first half as JBHS jumped out to a decisive 3-1 halftime advantage.

“The early goals are always really nice to get. It allowed us to play a bit,” Burroughs coach Mike Kodama said. “The second goal right after that was a big confidence booster for us. It’s a Burbank-Burroughs game and they come to play to. I wasn’t expecting anything different in terms of that.”

Burroughs (10-2-4 overall) played ball control much of the second half working on passing, spacing and technical skill.

“We are playing very well. We are doing everything coach is saying,” said Veisyan, who came to the United States from Armenia this past summer with his brother Artur. “We did all the fundamentals that we needed to do. Along the way we will make a few adjustments so we can improve our game in the second round.

“It was kind of a bigger game for us so we really wanted to win. That improved our game for today.”

Indians goalkeeper Alberto Meir would have had the shutout but a misplayed ball from his teammate rolled past him and into the Indians own net for Burbank’s only goal of the match.

Burbank fields a very young team and wins have been hard to come by. The Bulldogs fell to 2-9 overall and 1-6 in league.

Burroughs is searching for a second consecutive league title. Pasadena is in second place currently just two points behind. In the most recent CIF Division III poll, the Indians were ranked No. 5.

“I think we are getting better every day. We are halfway through league and we are where we want to be,” Kodama said. “But I think we can be much, much better. As long as our guys work hard and work hard off the ball, we will be fine.”

In a very physical contest between two evenly matched up squads, Burroughs prevailed on a lone goal scored by Bailey Simmons in the 30th minute of the first half.

The Indians’ Danielle Tilton threw in a beautiful and well-placed ball that Simmons headed in just past the outstretched arms of Burbank goalie Allison Tiegs.

Burbank (5-3-3, 3-2-1) had a golden opportunity to tie the game early in the second half on a penalty kick. But Dakota Briseno’s shot went wide and Burroughs hung on for the 1-0 shutout.

Indians goalie Taylor Bailey notched her fifth shutout in six league games as Burroughs improved to 5-0-1 in league and 6-6-1 overall.

The Indians are two points out of first place trailing Arcadia who they play this Wednesday.

“Despite missing several starters and suffering more injuries, JBHS defended relentlessly and held off a very strong Burbank team in a game that did the rivalry proud,” first-year Burroughs coach Brady Riggs said after the match.