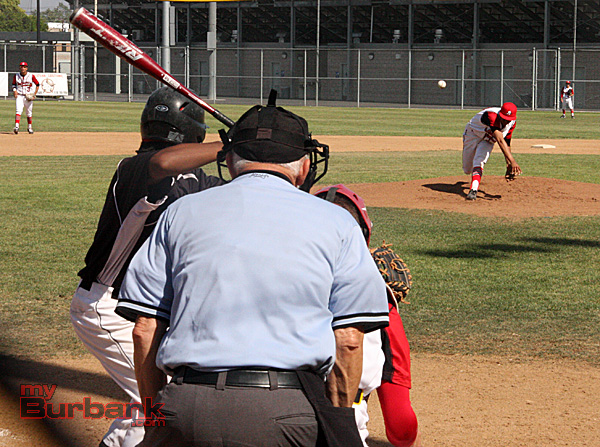 Coming off a significant win at Crescenta Valley on Tuesday night, Burroughs had two opponents to battle Friday afternoon at Tomahawk Field. First, the Indians had Glendale on the schedule. Second, they had to avoid a letdown after defeating a talented opponent in CV and then playing against the inferior abilities of the Nitros.

Behind the superb pitching of Luis Pereyra, Burroughs methodically defeated a poor Glendale team, 5-0, to maintain its hold of first place in the Pacific League. The Indians took out two birds with one stone.

“At the beginning of every game we are 0-0. And when the game is over we want to be 1-0,” Burroughs Coach Kiel Holmes explained. “We did what we needed to do. We put our runs up there. We had strong defense and our pitching was phenomenal today.”

To be a champion, all aspects of the game of baseball need to be executed and done well. Holmes expects his team to be focused and prepped at all times. He was satisfied with the win though not convincingly.

“I thought we could have played better. We took our foot off the gas a little bit,” Holmes said. “If we want to be the type of team that we expect to be, then stuff like that can’t happen.”

Pereyra was strong all game limiting the Nitros to only two hits in five innings of work while striking out nine and walking none.

“I had all my stuff working. I was hitting my spots and good things happen when you hit your spots,” Pereyra said.

The Indians quickly scored two runs in the bottom of the first inning. Chris Davies led off with a double and Cameron Rodriguez walked three batters later. Senior captain Brian Pozos then connected on a two-run triple to deep center that gave Pereyra all the runs he would need.

Leading 3-0 in the bottom half of the fourth inning, the Indians struck again. Singles by Akira Abderrahman and Jimmy Cramer and a double down the first base line from Aiden Anding cleared the bases giving JBHS a commanding 5-0 advantage.

Anding finished with three RBI’s on the afternoon while Pozos went 2 for 3 with a double, triple and two RBI’s. Davies had two hits as well for Burroughs which improved to 11-7, 5-0 in league.

Glendale’s only threat against Pereyra came in the top of the fifth when Ethan Howard led off with a single to left field. Pereyra then issued a balk and threw a wild pitch advancing Howard to third base with no outs. Pereyra regrouped and proceeded to strike out the side.

“He’s been there for us all season,” Holmes said. “Our priority as a staff is to come out and throw strikes. He did a pretty good job of that.”

Brandon Ortega came in relief of Pereyra and threw two solid innings allowing no hits and striking out two batters.

Burroughs next plays at Hoover on Tuesday before the big showdown against second place Burbank at BHS on Friday night at 6 p.m. The Bulldogs rallied from a 2-0 fifth-inning deficit Friday night against Arcadia winning 4-2 on the road to maintain its position in a tight Pacific League race.

“We can’t get caught up in the moment. Obviously we know them very well and we just got to take it as another game,” Pereyra said of the Burbank game. “We just have to do what we have been doing. That’s how we’ve been winning all of our games.”

“We need to stay humble and not let our record get to our heads. You never get complacent with where we are but just keep improving every single day,” Pozos added. “Games like this we can’t fall back on our heels. We need to keep moving forward and keep on fighting.”