Showing resiliency and toughness, the Burroughs football team overcame a 1-4 record in pool play to capture the “Consolation” championship of the Santa Fe 7-on-7 passing tournament this past Saturday. 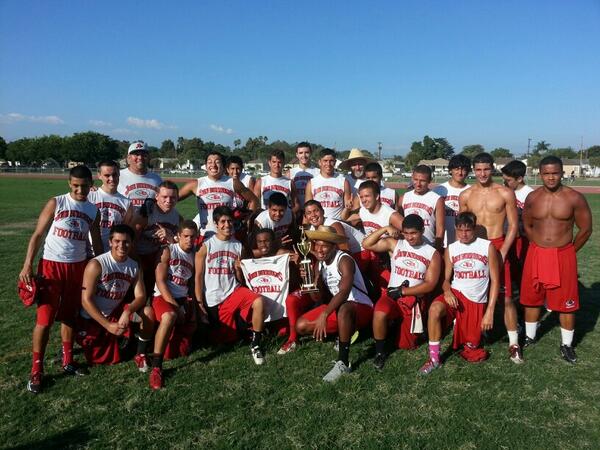 Their dubious record put them into the consolation side of the tournament. Then Burroughs played its best football of the day winning three straight – defeating Lawndale 30-10, Ontario Christian 30-18 and Long Beach Cabrillo in the consolation championship game, 29-25, with a great defensive effort late in the day to take the game away from a very talented and quick Cabrillo team.

Burroughs finishes summer football on Wednesday at JBHS with games against Saugus, Sierra Canyon and Village Christian at 6, 7, and 8 p.m.

The Burroughs girls basketball team took second place at the Norco Tournament two weeks ago. They also lost in the semifinals of the Ventura Tournament this past weekend. Here are their scores and statistics from each game:

Jordan Meltzer had 9 rebounds and 4 steals, Maile Tanigawa had 9 points and 5 rebounds, and Jocelyn Rieken had 6 points and 6 rebounds. Abbey Ibarra had 7 points and Teani White had 6 points.

Brooke Radcliff had 22 points and 11 rebounds. Davina Del Castillo had 10 points, 14 rebounds, and 6 steals. Paula Galicia had 6 rebounds and 5 steals. Abbey Ibarra had 6 points and Jordan Meltzer had 5 points.

Davina Del Castillo had 6 points and 10 rebounds and Brooke Radcliff had 8 points, and Alondra Ramirez had 9 points.