Hubbell would throw three more scoring passes as the Indians manhandled the Chiefs, 42-3, and now head into Pacific League play next week.

Burroughs (2-1) simply and thoroughly wore down Santa Fe (257 total net yards) in what was a physical match and saw Santa Fe senior wide receiver Jake Risdall suffer a head and neck injury late in the third quarter. The game was delayed for nearly a half hour, and Risdall was taken to a local hospital for observation.

Junior tailback Chance Bell (22 carries for 136 yards) would make it 14-0 with 10 seconds left in the same quarter and finalize a 69-yard, six-play drive. 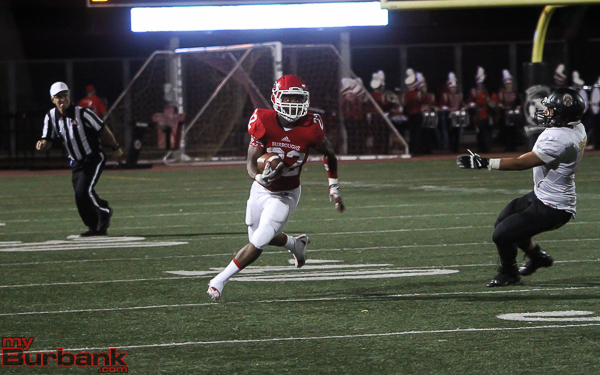 Tailback Chance Bell was integral in the 42-3 win over Santa Fe. (Photo by © Ross A. Benson)

The Chiefs (1-3) would finally get on the board when senior Alex Moreno booted a 38-yard field goal and 9:05 left in the second quarter.

Burroughs responded three series later with a seven-yard pass from Hubbell to senior wide receiver Erick Hernandez and 2:15 remaining before the break to pull in front, 21-3.

“We’re a senior-heavy team and we have a lot of leaders,” said Hernandez, who caught two passes for 16 yards. “I’m one of the leaders. I get vocal when I have to. I just want to help the team any way that I can.”

Hernandez spoke about the league portion of the schedule: “It’s a long season and now we start league. We just want to take it one game at a time. We take each step one at a time. We know the Burbank game [Nov. 6] is a long way off, but we think we’re going to have a good team.”

Burroughs will next play always-tough Muir at home next Friday, and Coach Keith Knoop cautioned his team against being over confident after the 39-point thumping of the Chiefs.

“Muir always has great athletes,” Knoop said. “They always cause problems. But we like to think that we’re a good team, and that we’re going to do well against them. This is going to be a good league. You saw what Burbank did to Canyon (35-6 rout of the Cowboys the night before]. We have to be prepared.” 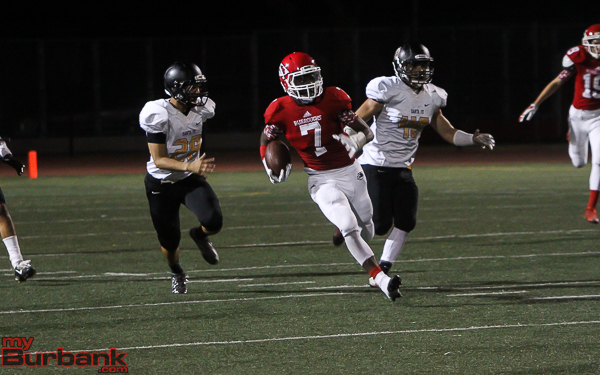 Defensive back Robert Awunganyi returns a punt against the Chiefs. (Photo by © Ross A. Benson)

Hubbell, who completed 11 of 17 passes for 238 yards, came into the contest with five touchdown tosses and no interceptions. Hubbell was picked off twice in the opening half.

The Indians (390 total yards) took command 28-3 with 5:44 left on the clock in the third quarter when Hubbell drilled senior wide receiver Hunter Guerin (66 yards on three receptions) all alone with a 41-yard strike, capping a two-play, 50-yard march.

With 1:48 left in the third quarter, Burroughs struck again, this time a one-yard run by Bell as the Indians forged a 35-3 lead. The drive consumed six plays and covered 36 yards.

On the next possession, Burroughs bolted ahead, 42-3, when Hubbell unloaded his final scoring toss, a 31-yard bomb to senior wide receiver Torin Harris (38 yards and two catches) with 11:11 remaining in the fourth quarter.