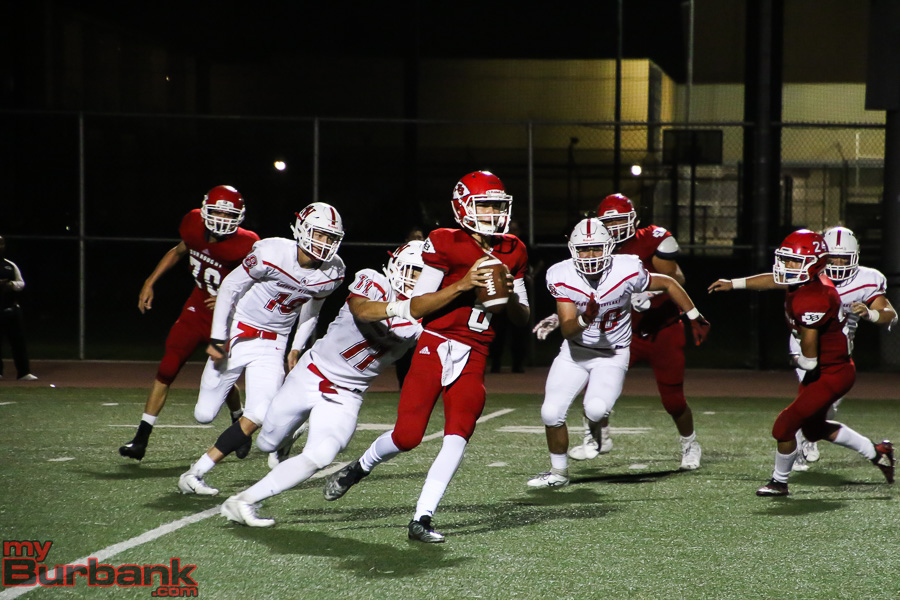 However, those strides were not enough to overcome the visiting Wolverines in a 39-15 nonleague loss.

“The kids saw in the first half that we put it together,” Burroughs coach Rand Holdren said. “You can’t take your foot off the gas and think we’ve won. We need a full four quarters.”

Burroughs (0-3) actually took the lead early on and trailed just 11-8 at halftime.

But things went south in the second half as Harvard-Westlake (2-2) scored a pair of touchdowns early in the third quarter and were never threatened again.

“We’ve got to walk through every scenario that there is,” Holdren said of his film session with his team.

Much of damage done to Burroughs was on special teams. Burroughs had one of its punts blocked, which translated into a Wolverine touchdown. Harvard-Westlake also successfully took advantage of an onsides kick and also recovered a loose ball kickoff to Burroughs.

Burroughs got on the board first as quarterback Nathan Piper scored on a keeper with 8:40 left in the first quarter. Burroughs also scored on the ensuing two-point conversion.

It was one of two touchdowns from Wang to Long.

Burroughs made a comeback with 4:47 left in the third quarter as Piper hooked up with junior Ellington Simmons on an 8-yard touchdown reception to make it 25-15.

Harvard-Westlake was led by tailback Sultan Daniels, who had 15 carries for 116 yards and a pair of touchdowns.