Replacing 37 graduated seniors from a Pacific League championship team with a 10-2 record is something the Burroughs High football will not have an easy time duplicating.

That has left the Indians relatively young and inexperienced heading into the 2016 season, the first season for Mike Reily as the head coach.

Reily is no stranger to Burroughs. He graduated from the school in 1994. He earned a scholarship to play at the University of Nevada, Las Vegas before returning to his alma mater and has spent the past 14 seasons as an assistant to longtime head coach Keith Knoop. Knoop is now one of Reily’s assistants. 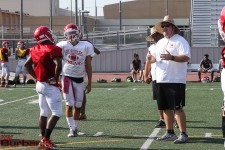 One of the brightest notes for Burroughs is that for the first time in more than a quarter of a century, the Indians enter the season with two players already committed to major college football programs.

“It’s comforting to have guys like that in your program,” said Reily. “They are two of the five captains. We’re expecting a great season out of them, but this is a team sport and you need nine other guys.”

Bell, who was the Pacific League Player of the Year last year, is clearly the go-to player on offense.

“Those 37 seniors had played football together for a long time,” Reily said. “We have a young team with some key seniors. We have some kids playing varsity football for the first time. We’re trying to get up to speed and be competitive.”

In the linebacker positions, Frugone, Gibbs, senior Diego Tovar (6-0, 175), and junior Kevin Hebri (5-10, 200) appear to have the inside track at getting significant playing time.