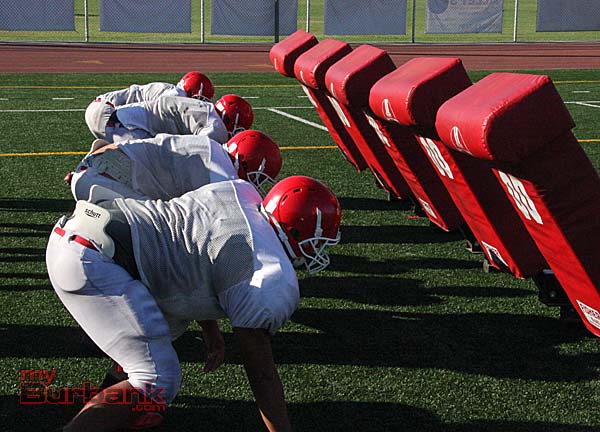 Burroughs is ready to pound ahead (Photos by Dick Dornan)

After a season of hard knocks, the Burroughs football team is intent on returning to its perch atop the Pacific League. Having won a league title in four out of six years including three consecutive seasons from 2009-2011, the Indians were rudely brought down to earth last season.

In the opening game of the 2012 season against Paraclete, junior quarterbacks Andrew Williams and Angel Manzanero were injured in a painful 35-10 loss. Subsequent defeats to North Hollywood and Camarillo left Burroughs with a 0-3 start. It only got worse when Arcadia came to Memorial Field and won, 18-8, to begin league action. 0-4 at Burroughs? Fans of the big red machine were in disbelief. 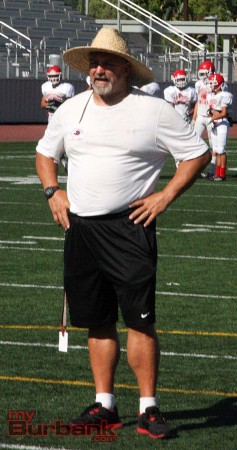 The season ended with a disappointing 37-14 loss to rival Burbank. No postseason followed. It was the first year that Burroughs did not make the playoffs as a member of the Pacific League since they joined in 2005. The Indians were a part of the Foothill League back then.

A final mark of 4-6 did not sit well with Burroughs coach Keith Knoop and the team began making amends with strong spring and summer workouts. With the regular season opener set for Friday, September 6, at Paraclete, Knoop discussed the expectations for 2013.

“Last year we had high hopes. After losing both of our quarterbacks against Paraclete, it kind of set the tone for us,” Knoop said. “By the time we got into league, we were pretty banged up emotionally and physically. We just struggled for the rest of the year. It showed that we needed leadership, and that you need good veteran guys and that is what this year brings.

“We bring back all those guys who went through that. They didn’t like it and they have a bitter taste in their mouth. They have a chip on their shoulder. They’ve all grown up a lot and are ready to go.” 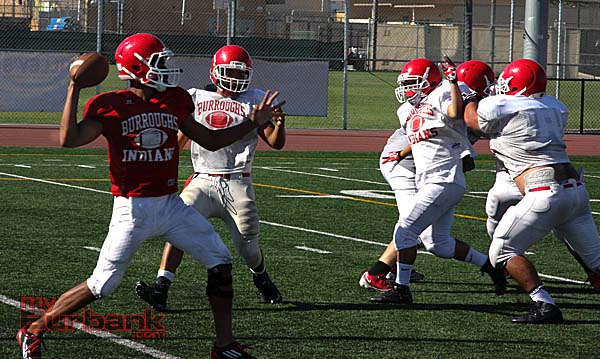 Williams and Manzanero return with valuable experience under their belt from a season ago and sophomore Steven Hubbell joins the team after having the most productive summer of the three signal-callers.

Schurr-transfer Javier Pineda will make the biggest impact in the Pacific League this year. Yes, you heard it here first. Pineda, 5-foot-9 and 170 pounds, has the ability and opportunity to etch his name alongside the great Burroughs running backs of the past. He can be that good.

The sleek-footed junior is the team’s best athlete and as explosive as they come. He’s as fast as former Burroughs’ star Zander Anding and can “juke, jive, jelly and jam” according to Knoop.

Throw in a deep receiving core and Burroughs has the makings of a very good offense unlike a year ago when they averaged a paltry 19 points per game.

Conor Joyce, who is being recruited by several Division one schools, is the total package at wide receiver. The 6-foot-4 senior runs a 4.5 40-yard dash and possesses tremendous hands and athletic ability. He also maintains a 4.2 GPA in the classroom.

Senior wide receivers Jacob Nutty and George Al Ajijian and senior tight ends Steven Santeliz and Notre Dame-transfer Cameron Rodriguez will add durability and talent to the passing game which was non-existent in 2012. 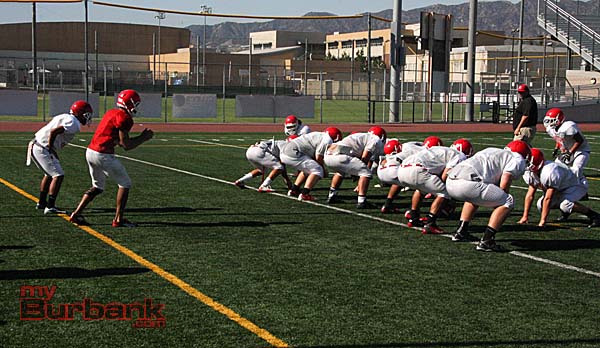 “We are always going to try to be good at running the ball but I feel this team is really chopping at the bit to throw the ball,” said Knoop, who begins his 17th season as head coach. “We want to open it up a little bit and see what we got. The boys want to prove we can throw this year.”

On the defensive side of the ball, a key to the season will be the health of senior defensive back Sean Johnson and senior linebacker Dillon Meza who are both on the sidelines currently nursing injuries. Johnson is another Division one college prospect for the Indians. 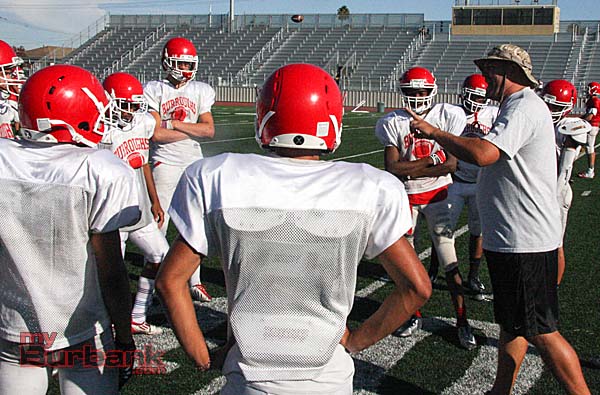 “Defense is what we need to find. If they can step up this year, we have the potential to do some good things,” Knoop said.

Joining Johnson in the secondary will be senior Davion Barker who started half of the contests in 2012. Pineda will bring his ball-hawking skills to free safety.

Rodriguez, Gildardo Chavez, Francisco Garcia and Michael Ospina will form the stronghold of the linebacker position.

Richard Marcuse had a strong summer at defensive end. Brad Peppmuller will also see action on the d-line.

Senior Jairo Gomez and cousin Andres Aguilar, a junior, are in a fierce battle for kicking duties.

“We have got to play good mature football every game if we are going to do something special this year. We’ve been getting after it pretty good,” Knoop said. “Nothing will be like this week when we play Paraclete. I’m sure it will be an electric week.”

The Indians will play their home opener vs. Camarillo at Memorial Field on September 19 at 7 p.m.

Burroughs is ready to pound ahead (Photos by Dick Dornan)