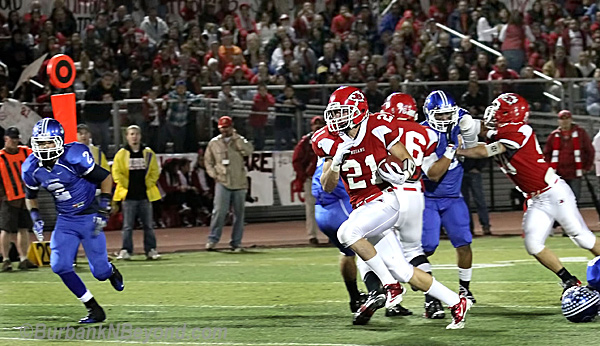 NOVEMBER 18 — Things seemed to be falling into place late Friday night for Burroughs High and Mayfair High to be battling the next week in a rematch of last year’s CIF Southern Section playoff contest which had ended the Indians season. Burroughs was up, 22- 9, in its opening round game against Los Altos while the Monsoons held a 21-17 lead versus La Serna High.

24 minutes of football later, and both schools were left thinking of what might have been. The Indians, especially, who were betrayed by a usually stout defense and costly penalties in a 37-29 loss to the Conquerors, in a CIF-SS Division VII Southeast game played at Glendale High School.

“If we don’t have those untimely holding penalties the game isn’t close, we win,” Burroughs coach Keith Knoop said after the game.

It was a bitter end for the Indians (6-5 overall), who had played at former Foothill League rivals Saugus, Canyon, and Hart highs in the preseason in the hopes of readying themselves for the playoffs. After storming through the Pacific League to a third straight league title, the Indians seemed poised to make that coveted run.

Burroughs was up 14-6 after the first quarter of play, and 22-9 at the half against the Conquerors. Star running back Zander Anding carried only 16 times but still finished with 217 yards and a touchdown. Anding would have topped the 300 yard plateau for a sixth time this season had a crucial 85-yard TD in the second half not been called back by a holding penalty.

Anding finishes his record breaking season with 2, 670 yards and 30 total TDs this season. He had 3,329 yards in a career that really only totaled a season and a half of starts.

The two Conquerors that Knoop had feared most went wild in the second half. Dual threat Shane Virnala completed 14 passes (14/20 for 152 yards and a pair of TDs) and rushed 14 times (for 72 yards) for a combined 224 yards and four touchdowns. Bruising running back, Justin Fa’aola had 195 yards on 27 carries and a touchdown after only having 30 yards at halftime.

Los Altos (8-3) held the ball most of the second half marching up and down the field on an underrated Indians defense, keeping Anding off of the field. A late fumble on a handoff exchange with about two minutes to go killed any hopes of a win for the Indians.