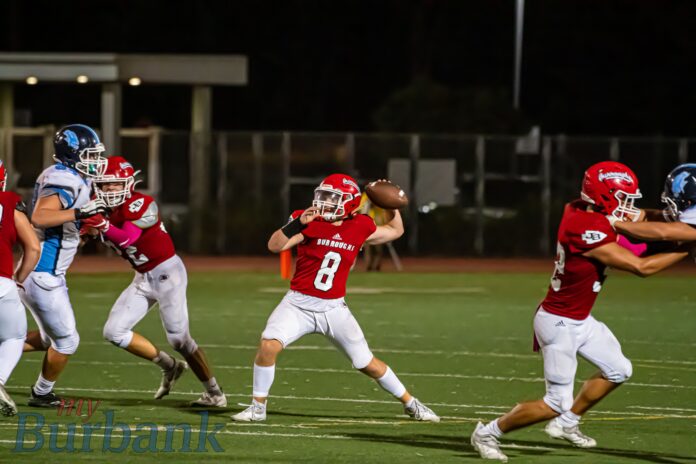 Moving the football and getting into the end zone has been a problem for the Burroughs High football team at times this season.
That was the case Friday night as the Bears were unable to make any changes to the scoreboard at Muir High in a 20-0 Pacific League loss.
“It has been the same story all year. Our defense showed up. We had the ball on offense four times inside the 40. We just need to execute and score points,” Burroughs coach Jesse Craven said.

Muir (7-1 overall, 4-0 in league) scored on just the second play from scrimmage to start the game.
Mustangs quarterback Mahki Clark found Jachai Pulley on a short pass near the sideline. Pulley was able to stay in bounds and break away from several Burroughs players who were in pursuit. He ended up going 46 yards for the touchdown.

Burroughs (3-5, 1-3) got a break early in the second quarter when linebacker Angelo Toscano intercepted Clark, giving the Bears the ball at Muir’s 33-yard line. But Burroughs could go only as far as the 27-yard line, before turning the ball over on downs.

Muir got a huge play on the ensuing drive as Charles Bennett caught a 48-yard pass from Clark. Burroughs remained tough defensively though, as it took Muir until fourth down before Devan Cogshell scored on a 14-yard run right up the middle of the Burroughs defense. The touchdown gave Muir a 13-0 lead with 7:57 left in the first half.

The Mustangs added a third touchdown of the half 2:25 left in the first half, as Burroughs was left surprised by 6-foot-4, 310-pound junior defensive tackle Wesley Ekpo coming in the game as a fullback. Ekpo took his only carry of the game 3 yards in for a touchdown.

Burroughs had another golden opportunity to score in the fourth quarter after getting the ball at Muir’s 24-yard line as the Bears recovered a loose ball after a Muir player touched the ball on a punt downfield.

Once again the Bears were unable to get any momentum going, as they could get no closer than the 15-yard line.
Quarterback Jon Englished finished the game with 76 yards passing. Nate Howland-Chhina led Burroughs with 35 yards rushing.
Burroughs ends the regular season next Friday at Memorial Field against rival Burbank. Both teams are fighting for third place and the final automatic playoff spot from the Pacific League.

Burbank will be that team if it defeats Burroughs. Burroughs would need a victory over the Bulldogs coupled with an Arcadia win over Crescenta Valley in order to get the third-place playoff berth.