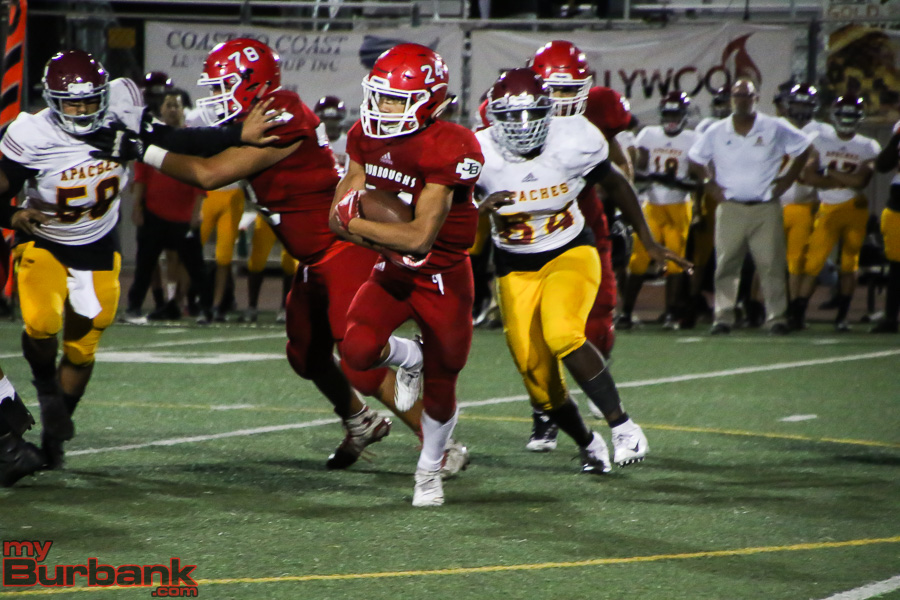 Too many chunk plays were at the source of the Burroughs High football team’s problems when it faced Arcadia on Friday night.

Four long plays that resulted in touchdowns helped catapult the Apaches to a 45-27 victory in the Pacific League opener at Memorial Field.

The Indians drew within 17-7 at halftime when sophomore running back Luke Rogers (81 yards on 35 rushes) scored on a seven-yard run with 12.8 seconds left, but then allowed four scores in the second half.

“That’s been the story of our year,” first-year Burroughs coach Rand Holdren said. “We’ve gotta finish. Last week we played a half. In the Canyon game we played a quarter. Tonight we played three quarters.”

Burroughs (0-4 and 0-1 in league) cut Arcadia’s lead to 31-13 with just under 10 minutes left in the fourth quarter when junior Nick Garcia (two of four for 26 yards), who came in and played quarterback, scored from two yards out.

A one-yard tally by senior Nathan Piper (10 of 25 for 114 yards and three interceptions), the starting quarterback, and 4:42 left sliced Arcadia’s advantage to 38-19.

Piper’s five-yard toss to Garcia and Rogers’ two-point conversion run lowered the margin to 38-27 with 2:21 showing.

“Our schedule has been an absolute buzz-saw,” said Holdren, whose team allowed 54 points to West Ranch, 50 to Canyon and 39 to Harvard-Westlake. “One of these games we’re going to put four quarters together.”

Holdren then added: “We’re trying to focus on ourselves,” he said. “Tonight was encouraging. That’s [Arcadia] an all-star team.”

Arcadia’s Cristian Reyes hammered a 25-yard field goal with 7:46 left in the first quarter for a 3-0 lead.

It took one play, a 60-yard dash by senior wide receiver Demarco Moorer (56 yards on five carries) to make it 24-7 with 9:52 showing in the third frame.

A four-play, 82-yard march ended with Guerra’s 60-yard strike to senior wide receiver Rolandiss Whitener (100 yards on six catches) and 5:48 left that shoved the Apaches ahead 31-7.

A drive that began at Arcadia’s 33 and used two plays was finalized when Guerra threw a 55-yard offering to Kindle and 7:43 left on the clock in the fourth period as the Apaches waltzed ahead 38-13.

Senior wide receiver Deonte Bevel capped off the night’s scoring with a 44-yard ramble and his only run with 1:32 left as Arcadia marched 60 yards on two plays.

The Indians (215 total yards) will play next Thursday at home against Glendale in a league match and a 7 p.m. start.