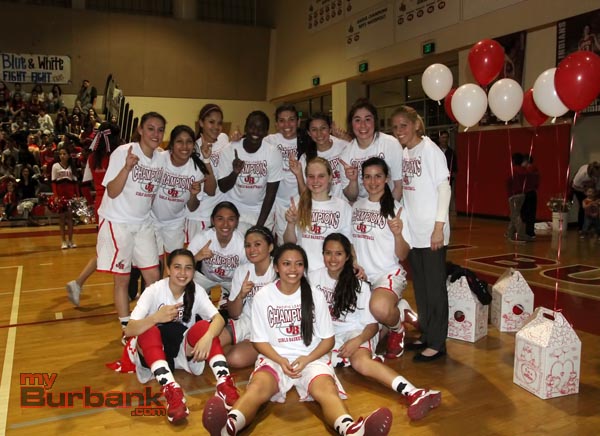 After dispatching Burbank, 58-47, with ease Thursday night at Burroughs, the Indians relished in the moment realizing that they became the first girls’ basketball team ever in school history to win back-to-back league championships. Their 14-0 mark is also a school-record. 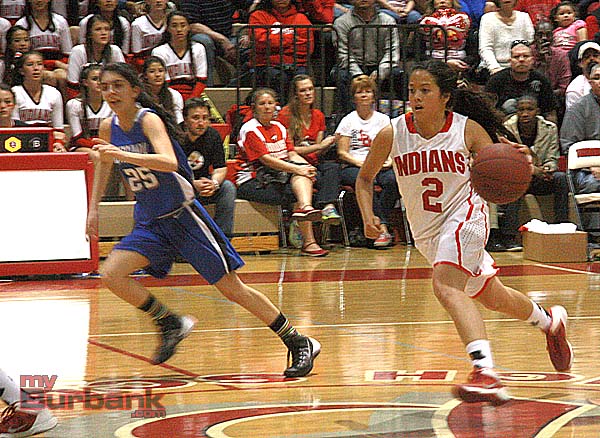 “We had great energy and our defense was awesome,” Burroughs coach Vicky Oganyan said. “We wanted to make sure the seniors won on their senior night.

“We didn’t feel at the start of the season that whoever wins league will go 14-0. Maybe 10-4 or 11-3. But we’ve had people step up and hit some big shots. We wanted to make sure we won every game at home. We are excited and enjoying the moment.”

Burbank, who had its six game winning streak snapped, fought back closing the gap to 29-19 when the Indians’ Sidney Ortega nailed a three-pointer from the left corner with 18 seconds left to make it 32-19 in favor of JBHS at halftime. 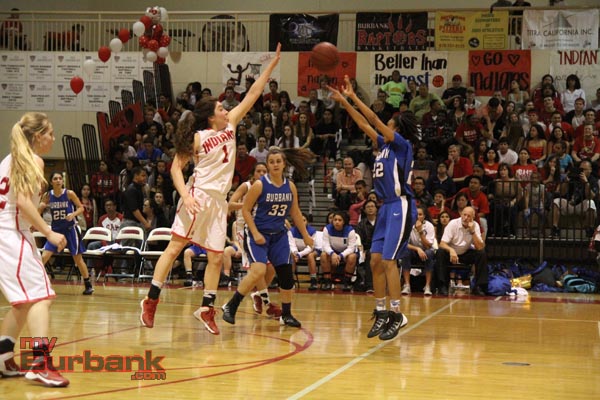 Burbank’s Yazzy Sa ‘Dullah had to work for every shot against a tenacious Burroughs defense. Here Davina Del Castillo closes out (Photo by Ross A. Benson)

Bulldog star, Yazzy Sa ‘Dullah, was stifled all night long by the Indians defense. Sa ‘Dullah didn’t score in the first quarter and finished with just 13 points on only two made field goals.

“She’s a great player and you can’t let her go off,” Oganyan said. “Our game plan going into the game was to stop her. You can’t go out and hope she misses. She had some good looks and missed them.”

Sa ‘Dullah came into the contest scoring 18.3 points per game including averaging 25 ppg in her last three games.

The Indians pulled away taking a 47-29 lead into the fourth period. The 19-point deficit after the first quarter was too much for the Bulldogs to overcome. 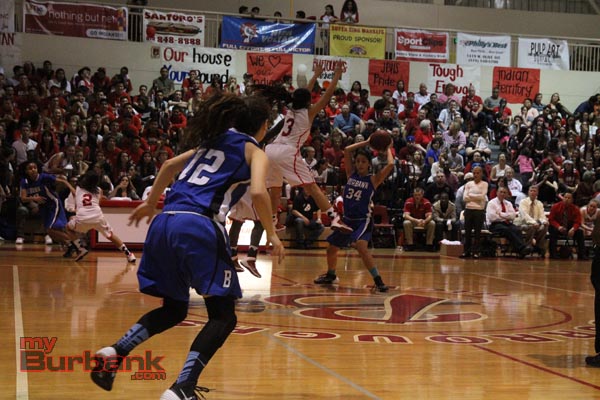 Sidney Ortega of Burroughs jumps high against Burbank’s Fatima Cisneros as the crowd watches on (Photo by Ross A. Benson)

“We are playing really well,” said Oganyan. “Our strength and conditioning really show. We don’t look like a team that is kind of done. We are kind of peaking. It’s good to see. Hopefully it carries on to the playoffs.”

The CIF basketball playoffs begin next week and the selection of teams and matchups will be announced on Sunday afternoon.

“It means a lot to me. We’ve worked hard for a couple years. We have chemistry, we have heart and we never give up.”

“We wanted to stay ahead so Burbank would never have a chance to get close to us.”

“I’m very excited. I plan on going very far in the playoffs. I have a lot of confidence in my team.”

“To me it feels unreal. This is the first time a team (at Burroughs) has ever done this (win back-to-back league titles). We can own that. This 14-0 league championship is ours. No one can take this away from us.”

“We shut their best player down and took them out of their game.” 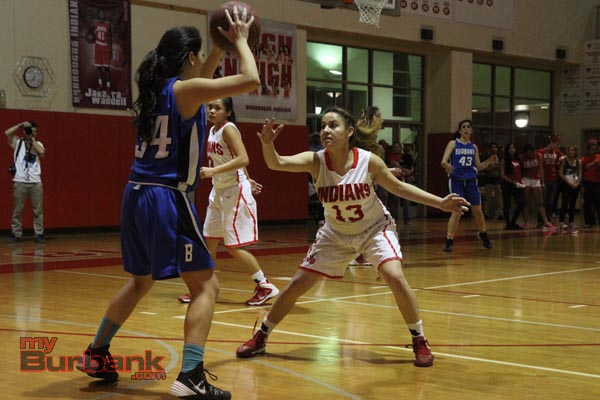 “It feels great. It hasn’t been done ever (back-to-back league titles) and we are so proud that we are the ones that put it on the board and in the records.”

“It feels amazing being my senior year and winning the championship.”

“In the fourth quarter when everyone is tired we keep going and work hard. We give it our best.”