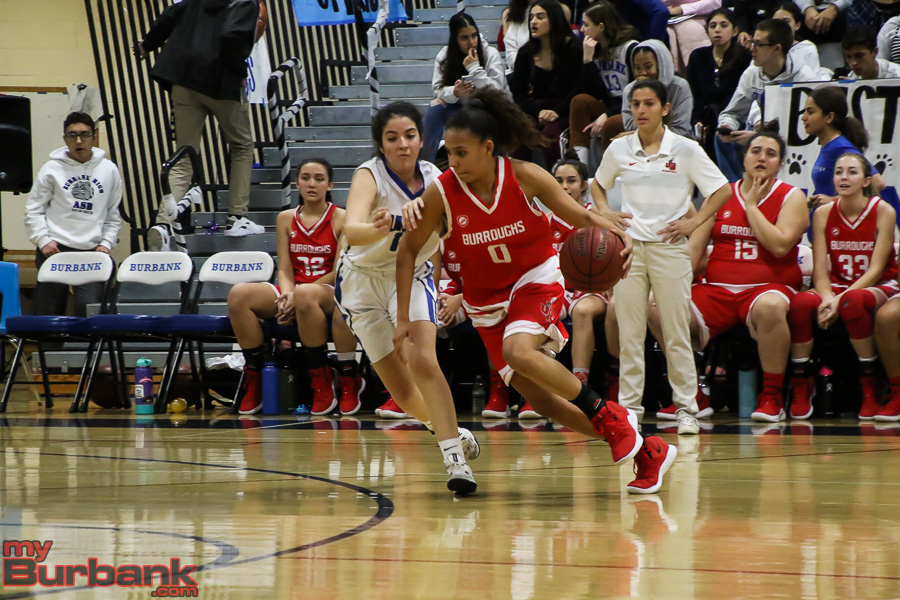 Basketball is usually filled with momentum shifts, and it was as a 20-point eruption in the second quarter by the Burroughs High girls’ basketball team helped tilt its Pacific League finale against host Burbank in favor of the Indians.

Kayla Wrobel, Nicole Rumfola and Faith Boulanger each dropped in 11 points in a 51-41 decision over the Bulldogs on Thursday night before a capacity crowd.

“Our league is a tough league,” Burroughs coach Vicky Oganyan said. “If you expect to not come in and have a tough game, you really don’t know what’s happening.”

Oganyan doesn’t mind using the bench and has confidence in that group.

“We always tell them. Be ready to go. If your number gets called and you go in the game, it’s your opportunity to perform,” she said.

Burbank (15-13 and 6-8 in league) came out strong and took a 9-7 lead into the second quarter as four players scored, including senior swingman Osanna Tirityan, who tallied two of her game-high 20 points.

Tirityan delivered 14 points in the second half.

Burroughs outscored Burbank 20-10 in the period and led 27-19 heading into the locker room.

The Indians, who will likely play a CIF Southern Section playoff game on the road, committed eight turnovers at the half, but only three in the second half.

Six players scored for Burroughs, which ended the regular season with three consecutive victories after falling to visiting Crescenta Valley 32-29 on Jan. 22, including Jillian Kukawski, who had all eight points in the second frame.

The third quarter belonged to Rumfola, a senior forward who scored six points as the Indians (34.6 percent on 17 of 49 from the field) forged ahead 40-31.

Tirityan tallied nine points in the third period for the Bulldogs (14 of 41 from the floor for 34.1 percent).

Boulanger, a sophomore center, had seven points at the half and canned one of the six three-pointers made by Burroughs.

“What it came down to is that they handed us such a bad beating [71-34] the first time we played them and that in this game my girls needed to know that they can compete,” Burbank co-coach Jett Del Mundo said. “We started out well and they made a run and it took us a little while to regain our composure. But then we answered and our will to win was there and we fought.”

A third and final three-pointer from sophomore shooting guard Erika Montoya (nine points) sliced the Indians’ margin to 40-34 with 5:45 left, but Rumfola’s trey with 2:05 showing gave Burroughs a 48-38 advantage.

Neither squad was especially effective at the free-throw line as Burroughs made 11 of 24 for 45.8 percent and Burbank, which hit five treys and isn’t guaranteed a CIF playoff spot, connected on eight of 18 for 44.4 percent.