It wasn’t too difficult to figure out that the Burroughs High girls’ basketball was going to double-team Burbank’s Osanna Tirityan and force others to beat them.

For the most part, the tactic worked because the visiting Indians prevailed 54-42 in a Pacific League contest on Friday night.

Even with two defenders draped all over Tirityan, the junior shooting guard managed to pour in a game-best 19 points for the Bulldogs, who had only three players score. 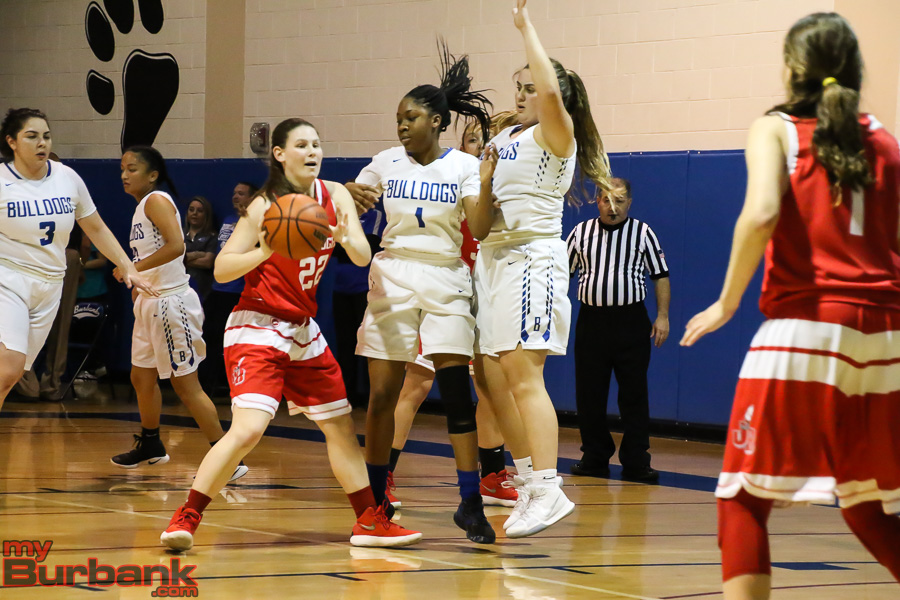 Burroughs junior guard Jillian Kukawski, who scored nine points, looks to pass the basketball against Burbank, which lost 54-42. (Photo by Ross A. Benson)

“She’s a great player, so it’s hard to stop her with just one,” Burroughs coach Vicky Oganyan said. “The game plan was to try and stop her, try to rebound and limit them to one shot.”

Burroughs (13-8 and 4-3 in league) had seven players score including freshman power forward Faith Boulanger, who tallied a team-high 18 points and grabbed six rebounds.

Aside from the opening four minutes, the Indians controlled much of the tempo and probably played their best league game.

“As far league, I would say yes, but we’ve had other moments in the season,” Oganyan said. 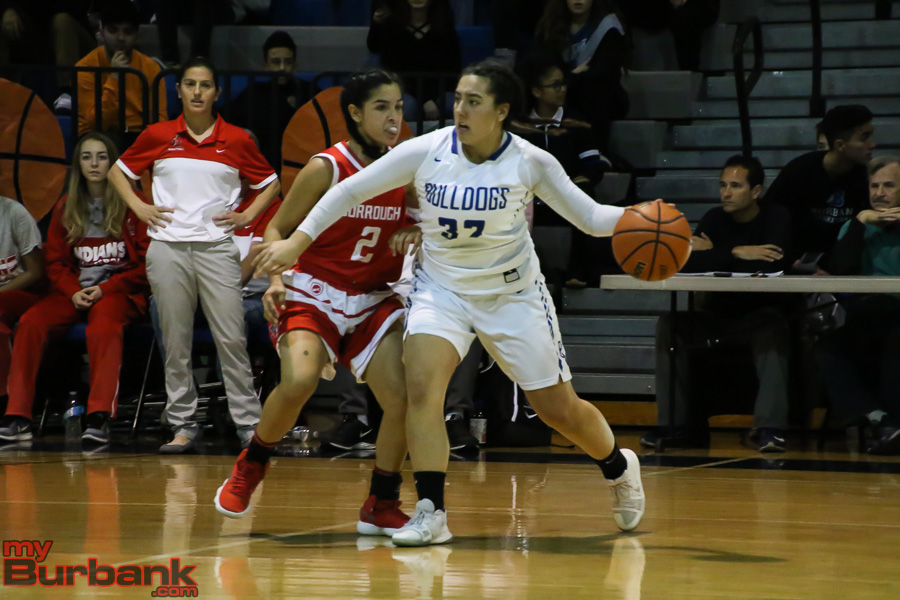 The Indians’ Ariana Farias is keeping a close eye on Burbank junior guard Emily Monterrey. (Photo by Ross A. Benson)

Burroughs outscored Burbank in every frame except the third when Burbank (8-13 and 3-4 in league) dropped in 13 points while limiting the Indians, who shot 35.9 percent (23 of 64) from the field, to seven points.

“We went away with what was working in that first quarter,” Burbank coach John Wells said. “They stuck to their game plan and took away Osanna and made others beat them.”

Wells went on: “They were running two at her and she did a pretty good job of passing,” he noted. “We got tired. We gotta keep attacking. We gotta do a better job of finding the gaps and attacking.”

Behind seven points from Boulanger and four points from junior shooting guard Jillian Kukawski (nine points), the Indians powered ahead 16-11 in the first quarter.

The Bulldogs actually led 8-0 on a follow-up bucket from Tirityan with 5:20 left in the initial period, but the Indians then outscored the Bulldogs 16-3.

The Indians pulled ahead 24-15 with 3:40 left on the clock in the second period on a put-back from Boulanger.

When senior center Marin Grote (four points, nine rebounds and five assists) scored from close range and 1:59 left in the second quarter, the Indians moved ahead 28-15.

“We ask her to be aggressive,” Oganyan said of Grote. “She has games when she’s not. She did better in the second half.”

In the third period, the Indians made two of 13 from the floor and one of four from the free-throw line.

The Bulldogs hit five of 11 from the field, two of two from the charity stripe and came within 39-28 heading into the fourth quarter.

The Indians, who drained six three-pointers compared to two for the Bulldogs, righted the ship in the final frame, making six of 15 and saw junior point guard Ariana Farias score six of her eight points after hitting a pair of three-pointers and Boulanger tallying six points.

Freshman small forward Jayla Flowers tacked on eight points for the Bulldogs, seven coming in the second half.