It must have felt like walking a tightrope without a net for the Burroughs High girls’ basketball team.

One wrong move and it could have been curtains, but it wasn’t as the Indians, after leading and then falling behind, rallied late against city rival and host Burbank on Friday for a dramatic and thrilling 43-41 triumph in a Pacific League classic.

“All season long we’ve struggled offensively,” Burroughs coach Vicky Oganyan said. “Our defense and our conditioning are what we count on. We only played six players so we have to be in condition.”

Where does one start when describing what happened before an overflow and extremely loud crowd? 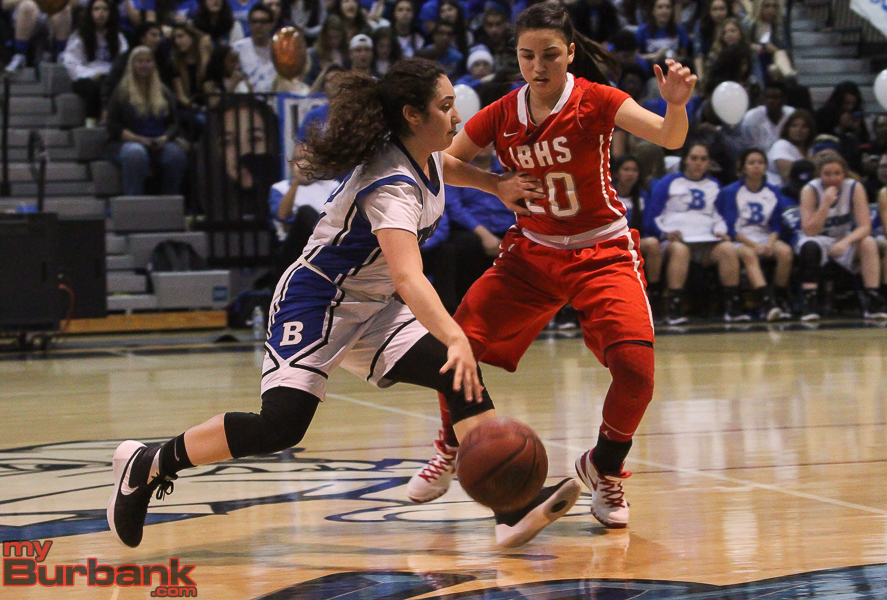 Burbank’s Osanna Tirityan dribbles while being defended by Jordan Meltzer. (Photo by © Ross A. Benson)

But when the charity tosses were needed the most, the Indians found a way to sink them.

In the fourth and final quarter, Burroughs (14-7 and 7-0 in league) canned nine of 16 free-throw attempts with junior guard Kamryn Cardenaz dropping in six of nine and drilling eight of 11 for the game.

“We knew that it was going to be a close game,” Cardenaz said. “We knew there would be pressure because it was Burbank, and even though I probably seemed calm on the outside, I was really nervous on the inside.” 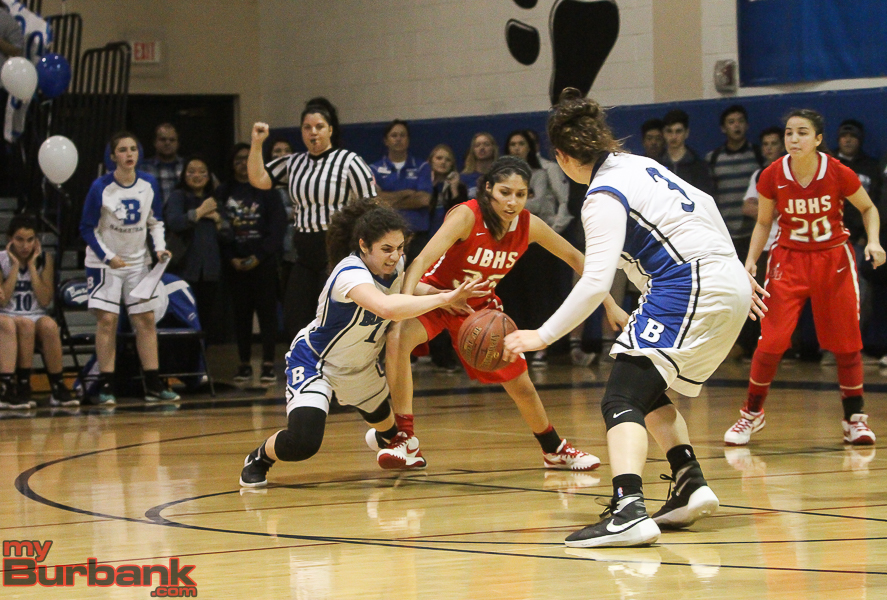 It’s always fast and furious when Burroughs and Burbank meet. This time the Indians prevailed 43-41. (Photo by © Ross A. Benson)

Cardenaz added: “The fourth quarter has been our quarter. We’re always in condition.”

The Indians entered the final quarter trailing 29-27, but outscored the Bulldogs 16-12 with Cardenaz scoring eight of her team-high 14 points.

With 23 seconds left, a pair of charity tosses by Cardenaz gave the Indians a 42-41 lead.

Meltzer finished with 11 points, and was a strong and steadying force for the Indians.

When Cardenaz, who grabbed six rebounds, scored a bucket and converted a free throw with 1:27 left, the Indians pulled to within 39-37. 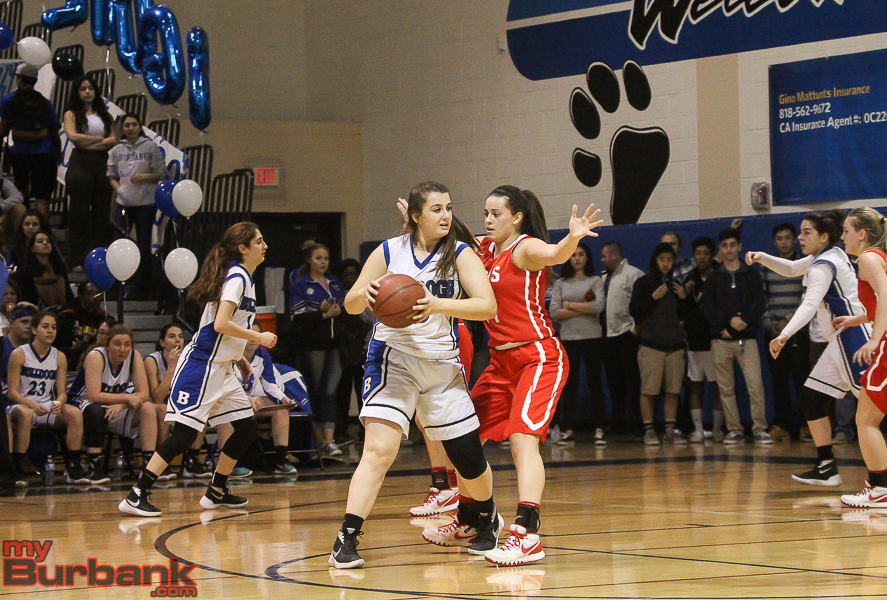 Defense and conditioning are always keys for the Indians. It was in Friday’s two-point win over the Bulldogs. (Photo by © Ross A. Benson)

Burbank (15-6 and 5-2 in league), which came in with a four-game winning streak, fell behind 6-2 in the initial quarter after making one of nine shots while the Indians made three of 12.

But Burbank rallied and outscored the Indians 16-12 in the second quarter after drilling six of 11 and the visitors hitting five of 19 from the floor.

Senior power forward Christina Mkrtchyan tossed in seven of her 14 points in the same quarter for the Bulldogs (15 of 38 from the field for 39.4 percent).

Burbank connected on three of six in the third quarter and scored 11 points while holding the Indians, who converted three of 13 from the field, to 10 points.

Again Tirityan, who added 11 rebounds, made a three-pointer in the period while Mkrtchyan, who pulled down eight boards, drilled two three-pointers with a free throw.

Leading the way for the Indians in the third quarter was senior shooting guard Abbey Ibarra who dropped in five of her seven points.

Ibarra, who nailed a trey in the third quarter, added a key bucket in the fourth quarter when the Indians made three of 10 from the floor.

Senior shooting guard Brooke Radcliff didn’t score in the third quarter but had an outstanding second quarter when she tallied five points.

The Indians will have a showdown on Tuesday at Crescenta Valley (6-1 in league). The tipoff is scheduled for 5:00 p.m. Meanwhile Burbank will visit Muir on Tuesday with a 5 p.m. start.