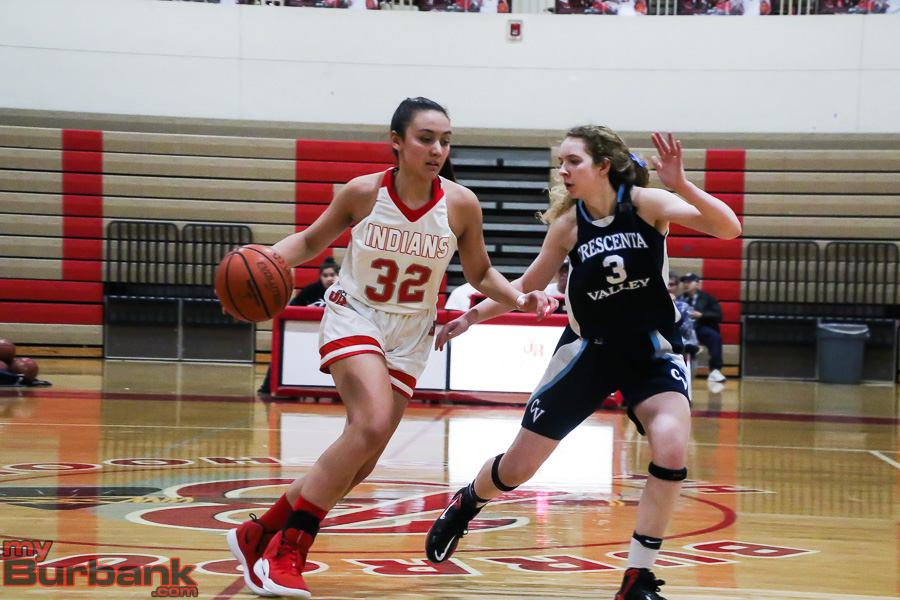 At the end of the first half and at the close of the fourth quarter of Tuesday’s Pacific League girls’ basketball game, Burroughs High allowed extremely long three-pointers which essentially handed visiting Crescenta Valley a 32-29 triumph.

Senior point guard Mari Lee scored a game-high nine points for the Falcons and all came via three-pointers.

“It’s supposed to be matched up and not let anything go deep behind us. We backed up a little too far,” Burroughs coach Vicky Oganyan said of the defensive strategy. “We let her have a running start.”

It appeared for all intents and purposes that the contest was going to overtime given that the Falcons had to go the length of the floor.

Sure enough, that’s exactly what they did and when Lee secured the ball in her hands and then launched a 35-footer at the buzzer, just like the first half 30-foot hoop that trimmed the Indians’ lead to 15-12, this one also swished through, but this time it gave the visitors a shocking three-point win that snapped a tie between the Indians and Falcons in league play.

With 2:10 remaining on the clock, a basket from Crescenta Valley senior power forward Alin Mazmanian (four points) shoved the Falcons (15-9 and 8-3 in league) ahead 28-25.

The Indians (18-7 and 7-4 in league) responded in kind as sophomore power forward Kayla Wrobel, who scored all of her six points in the fourth quarter, dropped in a bucket that sliced Crecenta Valley’s lead to 28-27 with 32.8 seconds left.

One of Bouchard’s points came at the free-throw line in the fourth quarter when she knocked down just one of three.

Bouchard was held in check offensively primarily because the Indians played excellent team defense and also fronted her on occasion.

The opening half of the contest wasn’t filled with lot of points as the Indians outscored the Falcons 7-3 heading to the second quarter.

“They’re all tough losses. I don’t see the difference between this one and the one in December,” Oganyan said. “It’s not like we lost anything today. There’s no league title on the line.”

Boulanger finished with only two points and had been averaging more than 15 points on the season.

The Indians missed their first four attempts from the field in the third quarter and all four shots from the free-throw stripe and managed to tally six points.

Burroughs didn’t score until Rumfola broke the skid with a basket. After the Indians missed a shot, Del Castillo scored and after back-to-back unsuccessful tries, Farias scored.

The Falcons scored 10 points in the third frame with Lee and senior shooting guard Georgina Kregorian (five points) both hitting treys and led 22-21 heading into the fourth period.