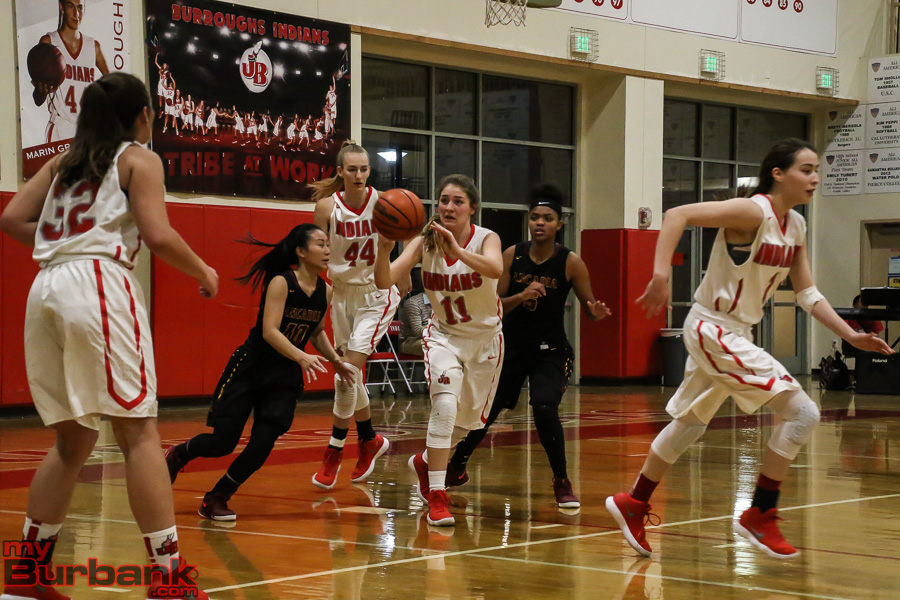 For one game, youth was served as three freshmen for the Burroughs High girls’ basketball team accounted for 36 points during Friday night’s 50-36 win over host Crescenta Valley in a Pacific League showdown.

Burroughs has a home game against Pasadena on Tuesday and will host rival Burbank on Thursday in the regular-season finale.

What was the key to Friday’s victory?

“Picking up our pressure. Our full-court press really helped us,” Burroughs coach Vicky Oganyan said. “They kind of struggled against that. I thought it was also important because it tired them out. We made the game faster and they were just kind of tired.”

The Indians trailed 24-17 at halftime, but trimmed the lead to 35-29 heading into the fourth quarter when they outscored the Falcons 21-1 after canning nine of 13 shots from the field.

In fact, so overwhelming was Burroughs that it outscored Crescenta Valley 33-12 during the second half.

“I’m super proud of our kids,” Oganyan noted. “I was telling my coaches we’ve had some like crazy wins. Crazy streaks, but this game is probably up there. This was just exciting.”

When Wrobel scored with 3:29 left, the Indians took control 40-35 as the Falcons called time out.

“They were determined and poised,” Oganyan said of her team. “They went into attack mode. We got down early. I’m proud of the way we came back.”

In the fourth frame, Crescenta Valley missed all 14 shots from the field with the only point a free throw from senior shooting guard Sarah Perez (nine points).

Burroughs dominated the backboards, outrebounding Crescenta Valley 45-17, including 23-8 in the second half.

The Indians fell behind 12-7 after the initial frame as senior shooting guard Rachel Dayag (team-high 12 points) and Perez each scored five points.

Del Castillo scored five points in the first period, while Boulanger hit two free throws and finished 10 of 10 from the charity line.

In the second quarter, Dayag dropped in a trey, added a free throw and then delivered the third from three-point range in the third quarter.

Boulanger again scored eight points in the fourth period, while Wrobel dropped in seven points and Kukawski had six.

Despite the Falcons shooting decently in the opening half (42.8 percent on nine of 21), they struggled mightily in the second half, making three of 23 for 13 percent.

During that same stretch, the Indians converted 12 of 21 for 57.1 percent, made nine of 11 from the free-throw line and finished 11 of 19, while the Falcons drilled five of 10 free throws.

“There were some things we weren’t doing,” Crescenta Valley coach Jason Perez said. “We weren’t playing very good defense  We weren’t attacking and  breaking the press easily. We had about four layups we missed. Four or five wide open threes. I think we missed free throws. It hasn’t happened to us all year. We haven’t gotten cold like that. The entire team went cold.”