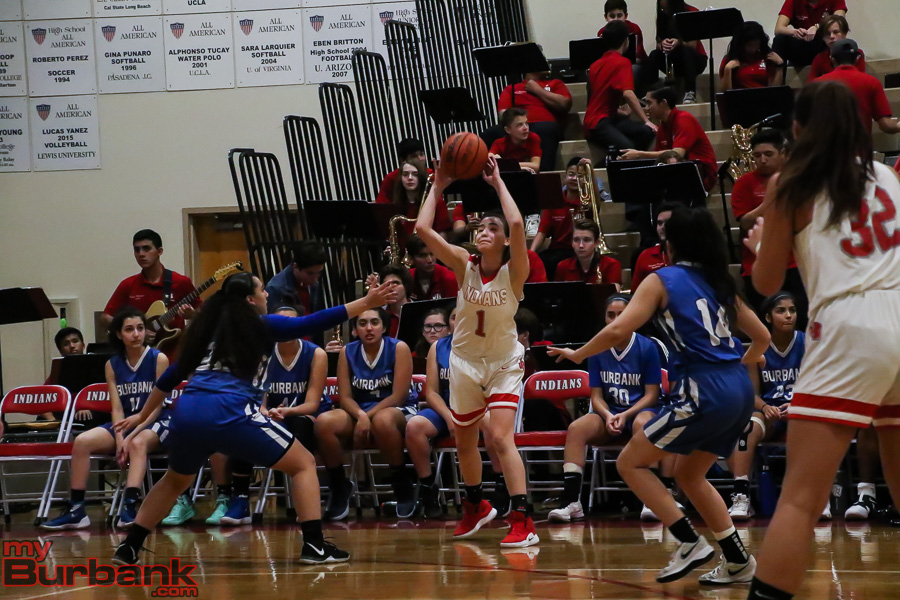 With the help of three players that reached double figures for the Burroughs High girls’ basketball team, the Indians were barely taxed in a showdown with city rival Burbank.

Behind Faith Boulanger’s game-best 20 points, host Burroughs cruised to an easy 71-34 win over the Bulldogs in a Pacific League match before a packed house on Friday night.

“We had higher energy and we were more conditioned,” said Boulanger, who had six steals. “I was pretty like excited and nervous. I’ve been with this team and I trust them and I know when we put our mind to it, we can do anything we want.”

“I think personally I had a pretty good overall game,” she said. “I could have done some better things on defense. I could have helped more outside on one of their better players [Osanna Tirityan] and I could have taken some charges instead of blocking her shot.”

After hitting nine of 19 attempts in the first quarter, the Indians rolled ahead 20-10 with senior forward Nicole Rumfola (seven rebounds and four assists) scoring 11 of her 19 points while sophomore guard Dyani Del Castillo (14 points) dropped in five.

“I would say this is probably the best we’ve played for sure,” Burroughs coach Vicky Oganyan said. “This is the most complete game we’ve played.”

Oganyan said the rivalry between Burroughs and Burbank is nice and certainly special, but you can’t make it bigger than what it is.

“We prepared for this game like any other game,” Oganyan noted. “I know both teams are going to be up for the game. I think the difference was that we shot the ball with confidence.”

The Bulldogs (13 of 40 for 32.5 percent) were held to four of nine from the floor in the first period as sophomore small forward Jayla Flowers (nine points) and senior swingman Tirityan (team-high 14 points) each scored three points.

“We had no energy,” Burbank coach Jett Del Mundo said. “I think we were playing against the ghosts of last year. We made every play bigger than it needed to be. This was like a good league matchup. No one was going to win a championship.”

Boulanger canned a pair of three-pointers in the second quarter and had 10 points at halftime after tallying four points in the first period.

Del Castillo (six rebounds and four steals) nailed two of her four three-pointers in the third quarter and Boulanger added the third of four treys as the Indians hit five of 17 shots.

Flowers garnered four points in the third quarter for the Bulldogs, who will host the Indians on Jan. 31, and managed three of 11 from the floor and trailed 46-26 heading into the fourth quarter.

“Jayla played well, but she still had moments I wished she did things differently. But this is high school basketball,” Del Mundo said.

Nine players scored for the Indians (39.3 percent on 26 of 66 from the field) in the final frame with Boulanger scoring seven points and Rumfola dropping in four points.

Burroughs, which made nine from three-point range, drilled 10 of 17 from the free-throw line (58.8 percent).