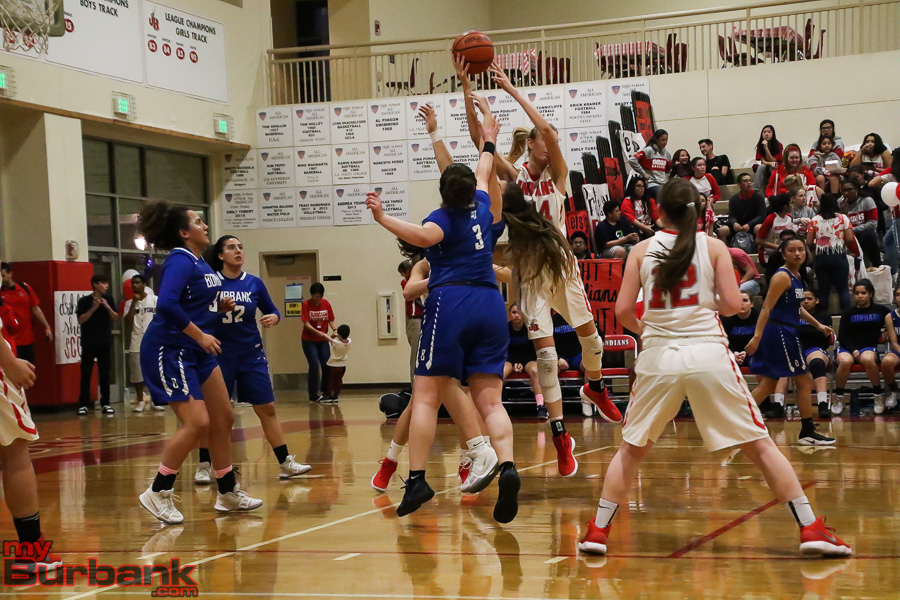 After a pedestrian 3-3 record to commence the Pacific League portion of its schedule, the Burroughs High girls’ basketball team rallied and ended with an eight-game winning streak that included a 54-41 victory over visiting Burbank on Thursday night.

The Indians, with the triumph, are locked in a three-way tie with Glendale and Crescenta Valley, which fell to Arcadia 57-47.

A coin flip will determine the actual order each team will finish and also help seed the squads.

“The teams in our league are pretty good,” Burroughs coach Vicky Oganyan said. “The coaches are good. It’s never easy, even when you’re up it doesn’t mean anything. The other teams are always going to make a run. I like the way our team responded.”

Boulanger scored in every quarter, but was especially effective in the first and fourth periods.

Burroughs darted ahead 39-29 with 6:15 left in the fourth quarter after junior shooting guard Jillian Kukawski (five points) canned a three-pointer.

But with 4:19 remaining, a hoop from Burbank junior point guard Emily Monterrey (three points) trimmed the lead to 39-34.

The Indians were in front 19-11 after the first quarter with Boulanger tallying eight points.

Boulanger’s total offset Burbank freshman small forward Jayla Flowers, who had 10 of her team-best 15 points in the opening stanza.

“We came out and we played tough. We weren’t over excited,” Burbank coach John Wells said after his team went 11-19 and 5-9 in league for sixth and will miss the playoffs. “We were right there where we needed to be. We played them a lot tougher than the first time.”

Wells noted the game after Monterrey’s hoop could have gone either way.

In the initial frame, senior center Marin Grote (eight points) and junior point guard Ariana Farias (nine points with five assists) each scored four points for the Indians, who shot 37.2 percent (19 of 51) from the field.

Burroughs was held to eight points in the second quarter with Boulanger and Farias each dropping in three points, while freshman power forward Kayla Wrobel scored two points.

Flowers delivered four points in the second quarter, while junior shooting guard Osanna Tirityan had two of her 11 points for the Bulldogs, who made 15 of 49 for 30.6 percent.

Burbank outscored Burroughs 10-9 in the third quarter with Tirityan and junior power forward Sofia Aslanyan (12 points and six rebounds) each tallying four points and trailed 36-29 heading into the fourth quarter.

Boulanger’s seven points in the fourth period helped the Indians outscore the Bulldogs 18-12.