“Ava Kramer did an amazing job on defense,” Burroughs coach Brady Riggs said. “She was the difference in this game. She just gave their best player [Chloe Ataya] less time.”

Riggs went on “It’s a big game for our program. CV and Arcadia are the two best teams and they have been forever,” he noted. 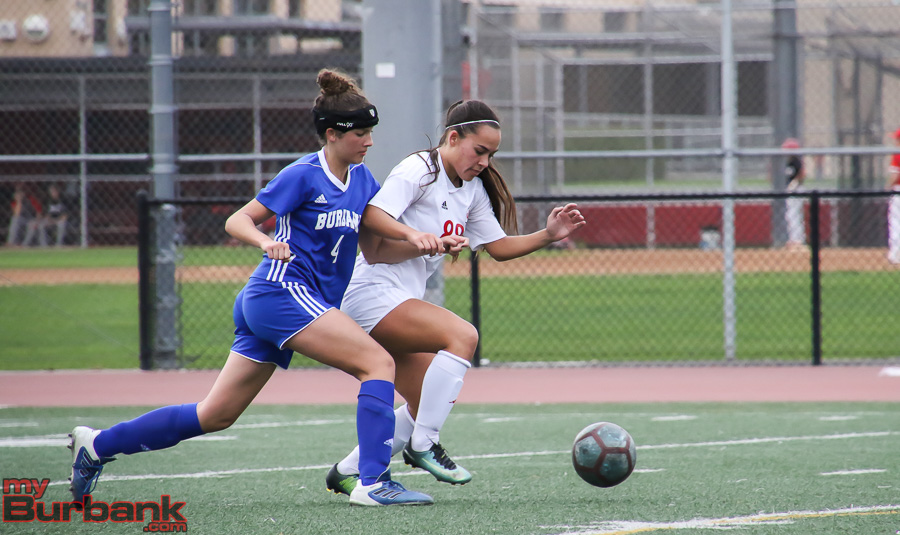 Catrina Villalpando (#88), shown in a match with rival Burbank, was a steady influence in a 2-0 win over CV. (Photo by © Ross A. Benson)

Burroughs, which will cap its regular season with a clash at rival Burbank on Thursday, struck in the sixth minute when junior defender Emily McHorney scored from 15 yards that made it 1-0.

“It was a team effort, which makes coaching so much fun,” Riggs said. “Early goals are great. It takes the pressure off.”

Burroughs seized a 2-0 cushion when freshman forward Lauryn Bailey located the back of the goal with a 15-yard kick in the 52nd minute.

Bailey, who also chipped in with an assist, had an opportunity to make it 3-0 from 10 yards in the 75 minute.

The action commenced when Falcon freshman Ashlin Cuesta had a 15-yarder in the second minute that was caught by senior goalie Samantha Martinez.

A minute later, Burroughs sophomore defender Orla Giffen collided heads with a Falcon player and didn’t return to the match.

Cuesta nearly had a breakaway in the 13th minute, but Martinez scooped up the ball before Cuesta could kick it. 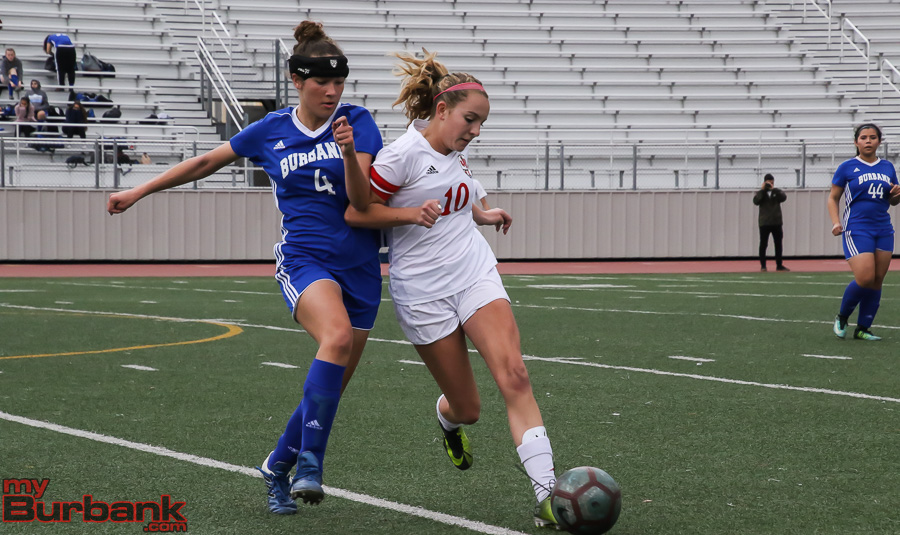 Junior midfielder Abbie Riggs, in a recent match against the Bulldogs, had an assist versus the Falcons. (Photo by © Ross A. Benson)

Junior Samantha Avendeno had a 20-yard loft for the Falcons that went off the net in the 16th minute.

Junior midfielder Abbie Riggs, who had an assist, delivered a 15-yarder that sailed wide right in the 22nd minute and senior forward Catrina Villalpando added a 35-yarder a minute later.

In the 24th minute, senior defender Anna Kasper unloaded a 50-yarder that didn’t find the target.

Freshman Dana Ryan had a 15-yarder for Crescenta Valley in the 38th minute, but McHorney tossed in a 20-yarder in extra time and Ataya, a freshman, a 35-yarder that sailed over the net in extra time.

“I had the job of defending their best player,” said sophomore defender Ava Kramer. “We know she’s a really good player. My job is to deny her any balls and prevent her from getting into scoring position.”

The second half began with the Indians getting off the first five kicks and they included Bailey’s 20-yarder that drifted too high in the 44th minute, Villalpando’s corner kick and header by Riggs from 10 yards in the 49th minute, Kasper’s 35-yard free kick in the 50th minute, Bailey’s goal and Bailey’s 10-yarder in the 53rd minute that snapped the string by Cuesta’s 15-yarder that Martinez grabbed in the 54th minute.

The Falcons had the next two attempts with sophomore Kathryn Thamasian’s throw-in and Cuesta’s 10-yard header in the 57th minute and Ryan’s 15-yarder that sailed high in the 58th minute.

Thamasian had a 15-yard free kick in the 61st minute and Villalpando a 35-yarder in the same minute.