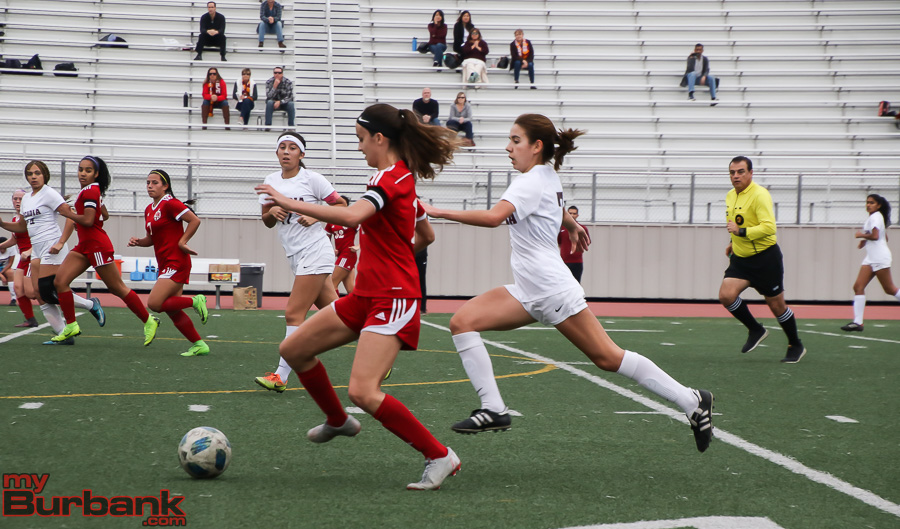 It’s not official just yet, but the Burroughs High girls’ soccer team, which held on for a 2-1 victory over longtime powerhouse Arcadia at Memorial Field on Tuesday afternoon, is one game away from winning its first league title in more than a quarter century.

On Thursday, with a victory over city rival Burbank, the Indians could capture at least a share of the Pacific League title.

“They are easily the best team in this league since I’ve been coaching here in 2013,” Burroughs coach Brady Riggs said of the Apaches, who have claimed the last seven league championships. “To beat them with everything on the line is absolutely cool. Especially coming from behind. But that’s this group. I knew they wouldn’t quit. They’re amazing.”

A goal in each half by Burroughs against the powerful Apaches set up a celebration afterward.

In the 29th minute, and on 25-yard blast off the right foot of Lauryn Bailey, the match was even at 1-1.

“We knew it wasn’t over yet. We always come back after they [the opponent] score,” said Bailey, a sophomore forward.”

The clincher was kicked into the net from 15 yards in the 65th minute and came from sophomore midfielder Lily Gonzalez, who was given a yellow card in the 61st minute.

“When I came off I was very frustrated with myself, the way I was playing, but I knew that my performance shouldn’t go against my teammates, so I knew that when I go back in, I had to play twice as hard,” Gonzalez said.

The Apaches bounded ahead 1-0 when junior forward Bertha Guzman drilled a 15-yarder from the right side in the 12th minute that eluded freshman goalie Kaylin Casper.

After falling behind, the Indians seemed to become more laser-focused. “They got to play the way they want to play,” Riggs said. “That’s aggressive and attacking and free-flowing. They want to try and score goals.”

Emily McHorney was an important cog in the victory.

“She played the best game of her career and it’s been a damn good career,” Riggs said of the senior defender, who along with junior Ava Kramer are defensive stalwarts.

After Arcadia’s lead, the Indians dominated the action until Guzman unloaded a shot in the 27th minute.

Bailey had a kick in the 13th minute and one in the 14th minute that sailed too high over the net.

Gonzalez’s kick in the 15th minute drifted wide right and a 10-yard attempt in the 17th minute by junior forward Trinity Vournas was blocked, while junior midfielder Olivia Cashman added a kick in the 19th minute from 20 yards.

Senior midfielder Abbie Riggs contributed a 33-yard free kick in the 21st minute for the Indians.

“It’s not tough to play a game like this,” said Riggs, who was coughing and wheezing and clearly under the weather. “It’s fun.”

Riggs knows the importance of defense.

“Before the game we say defense like hell. We know we have a good offense,” she noted. “We knew at some point we’re going to put it in the back of the net. We have to worry about us losing it.”

The younger Riggs went on: “We handled our defense today,” she pointed out. “Everybody stepped up. We won all the balls in the middle.”

Two kicks by Bailey followed and included a 35-yarder in the 33rd minute and a 25-yarder in extra time.

Junior defender Teresa Gardner had a 35-yarder in the 41st minute for the Apaches.

Freshman Samantha Valencia delivered a 35-yard kick in the 46th minute that was scooped up by Arcadia senior goalie Katherine Guerra.

Vournas had a close-range header in the 48th minute and Gonzalez’s 20-yarder sailed wide left in the 49th minute.

Valencia had a free kick in the  51st minute and a corner kick by Riggs and Bailey’s follow-up kick in the 54th minute missed the mark.

Gardner’s free kick in the 56th minute was too high and Cashman’s attempt in the 59th minute drifted wide right.

Freshman midfielder Avery Bogue’s 30-yarder in the 60th minute was off target for the Apaches.

Burroughs freshman forward Megan Schmidt delivered three straight kicks and they included a 35-yarder in the 61st minute, an attempt in the 62nd minute and a 20-yarder in the 63rd minute.

Cashman contributed a 20-yarder in the 63rd minute and Riggs tacked on a kick in the 64th minute.